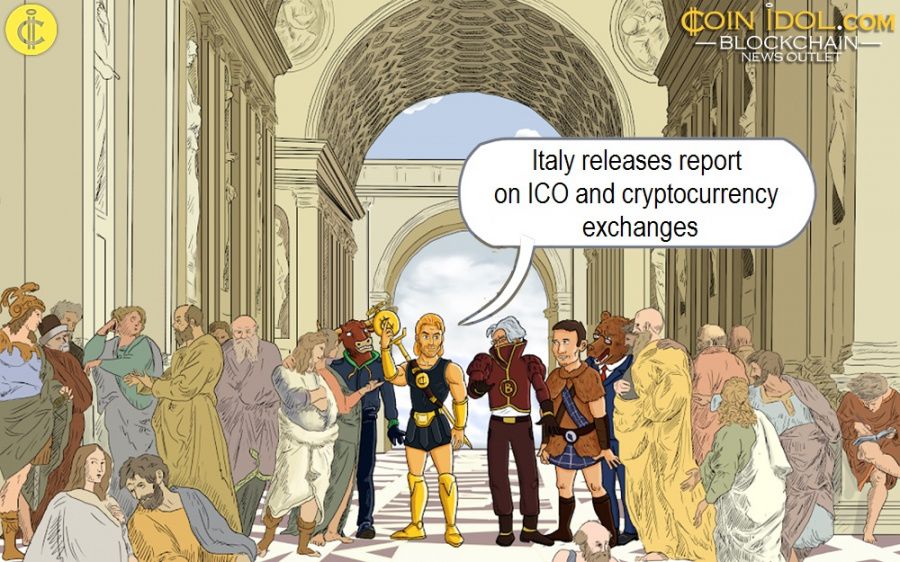 The government authority of Italy responsible for regulating the securities market, Consob, recently established rules, definitions and criteria for cryptocurrency and initial coin offerings (ICO) in a document that defines the outcome of the public consultation. Consob has published on its official website the final report on the initial offers and exchanges of crypto-activities.

The cryptocurrency activities are with "distributed ledger technology", therefore not only those on blockchain technology. The new autonomous figure of "custodian" of the tokens emerges, which can join the figures of the issue platforms and those of cryptocurrency exchange. And the ICOs are entrusted to subjects to whom the rules already provided for the managers of equity crowdfunding platforms apply.

The report released on January 2, 2020, is divided into various sections including the defining aspects and the regulatory choices regarding the initial phase of the offer and the subsequent negotiation of cryptocurrency activities.

With regard to the definition of cryptocurrency, first of all the Authority clarifies that despite having received comments and requests regarding greater clarity regarding the exclusion of these new instruments from the scope of European legislation, through specific indications, also with tables and examples, it does not seem possible for the national legislator and for the national authorities to introduce further specifications than those established by the European Union.

The notion of "financial instrument", in fact, is contained in the so-called disciplines MiFID and transposed into Italian law by the Consolidated Finance Act. Being of primary rank, it cannot be integrated nor much less derogated from indications of national regulators.

The criterion, therefore, to understand if a cryptocurrency can be excluded from the scope of the "ordinary" discipline cannot be found in a positive rule, but it will be necessary, from time to time in turn, assessing whether the rights associated with the token can make it fall into one of the categories listed in Annex I of the TUF and, therefore, is actually a financial instrument and as such subject to the "ordinary regime".

The document in fact clarifies that the discipline to be promoted is aimed at regulating only the offers of tokens that cannot be assimilated to financial instruments. These are, in particular, the so-called utility token, as clarified by the authority, or of those digital assets that incorporate the right to a future performance, which may consist in the possibility of using an asset or receiving a service that the issuer has already implemented or promises to implement.

Furthermore, the document in question clarifies that the special regime which is intended to outline the operations of tokenization of rights connected with the transfer of movable or immovable property, or parts of them, are not included in the special regime. In truth, the exclusion does not appear completely clear, from the moment in which CONSOB excludes its applicability only if not reconnected to concrete business projects.

This suggests, for example, that if goods are tokenized as part of an economic initiative aimed at offering services linked to these goods, the opt-in regime proposed by the supervisory authority could be used, which provides, basically, a derogation from the application of the disciplines relating to the offer prospectus and to the remote promotion and placement of cryptocurrencies that integrate the domestic notion of financial product.

This is because the primary objective of the intervention is twofold: in fact, they intend to encourage entrepreneurial initiatives based on these new technologies while simultaneously protecting the public from potential investors. Some considerations, always from a definitive point of view, are carried out both regarding the use of the terms blockchain and distributed ledger technology.

By accepting some of the comments received, CONSOB resumes the definition contained in art. 8 ter of the law n. 12/2019, clarifying that the reference must be considered carried out in general to the cryptocurrencies stored via "technology based on distributed ledgers", therefore not only on blockchain technology. On the other hand, the distinction between permissionless and permissioned blockchains is not considered relevant.

The report ends on the definitive point with two further considerations. First of all, specific relevance is given to investors' expectations of future negotiation of the digital assets acquired; the Authority recognizes this point as decisive by requesting that it be expressly indicated in the project presentation white paper.

Initial Cryptocurrency Offers and Their Negotiation

The choice to subject initial cryptocurrency offers to placement through subjects to which the rules already provided for those who manage equity crowdfunding platforms is confirmed in the final report, also underlining that it is indeed an optional regime while remaining, therefore, free for the issuer's choice to use these platforms.

With reference to the requirements of the promoters of cryptocurrency offers and platforms, particular emphasis is placed on the principle of transparency. In particular, the promoters should in any case be obliged to publish a document in which information is given on the transaction, on the digital assets to be issued and on the platforms on which they will be negotiated, with obligations to update it on an annual basis or in the presence of exceptional events.

The verification of the fulfilments regarding the proposed operations will remain with the operators of the platforms. In particular, CONSOB suggests that the operator also operates a control of the technological protocol used, this limited to the launch phase of the offer.

Significant, the expansion of the possibility of access to the trading platform also to cryptocurrencies not originally placed through the opt-in system. It is necessary to remember, in fact, that a limitation for the negotiation of cryptocurrencies had been introduced in the document placed in consultation, since only those already issued on an authorized portal could then have been negotiated on the portals subject to supervision.

In the final report, the Authority, acknowledging the comments received, admits that the token offered can be admitted to trading in a cryptocurrency exchange system registered in the CONSOB register or even based in a foreign country, provided that "it is subject to a regulatory and supervisory regime that has characteristics that are in line with the provisions of Italian law and provided that, in relation to the exchange system itself, Consob has entered into a specific cooperation agreement with the corresponding competent foreign Authority".

This will be possible provided that the cryptocurrencies comply with the admission conditions provided by the organizer of the trading system and adequate information is made available to investors.

The exchange platforms authorized by CONSOB may also be promoters of Initial Exchange Offering (IEO), in which the initial offer of the tokens is made directly on the exchange platform, always having regard to the need to provide an adequate information set to investors.