The Influence of Referendum in Italy on Cryptocurrencies in Europe 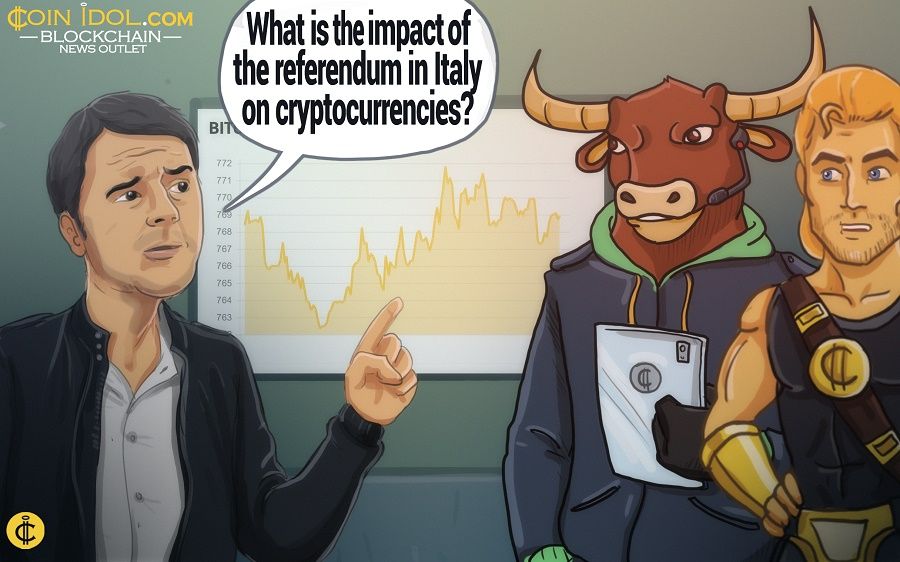 The Italian prime minister, Matteo Renzi, has taken the all-time risk of pledging to resign after a negative result of a referendum on a constitutional reform which could make it easier for the government to pass laws without unnecessary delays.

The referendum ended with the ‘No’ campaigners, led by opposition politicians of the 5-star party, winning by a margin of more than 60%. CoinIdol.com Blockchain News Outlet will examine the effects of this referendum on Europe as a whole and the position of cryptocurrencies in Italy.

Was the referendum necessary?

As is the case in many democratic nations, critical decisions of public interest are made by the public through a majority vote process of referendum. In Italy, the prime minister saw a problem in how the government is run because of a lot of delay fr om the parliament, so with a Yes result he would be able to speed up the process of passing a bill.

What are impacts of the referendum on cryptocurrencies and bitcoin ?

Now it’s clear that Mr. Renzi has risked not only his career but also the future of his country should Italy go ahead and hold a referendum on whether it stays in the European Union or a different twist of results would be expected but all triggered by Renzi’s decision for this first referendum.

We also spoke to Andrea Benetton, Blockchain Specialist, Business Analyst, Economic and Policy Columnist at BlockchainLabit about the situation of cryptocurrency in Italy:
Andrea Benetton said:

“I don't think that referendum result will change the adoption of crypto in Italy, at least there is no effect on the banking system. One effect, in the eventuality that current legislature will be dissolved, can be the delay in discussing and eventually adopting new laws, as for example the law proposal of senator Quintarelli to ban anonymous crypto like zerocash or other new regulations.”

“Trust in bitcoin is increasing as I said and even general usage. At last, physical shops that accept bitcoin in payment are increasing and I believe that the dual currency (BTC-EUR) use will be healthy for both, for bitcoin to increase its adoption and for euro to be less under pressure of financial lobbies at last: why we were not witness to a bitcoin peak after Italian referendum as happened after Greece crisis, Brexit and Trump election? I think because we have Mr Draghi at head of monetary European politics Probably we are in a monetary bubble created to keep Italy safe from a Euro-exit because technocrats are aware that could be the real end of Europe as now concepted the technocrats idea of Europe is totally wrong and different from European people's idea and even in Italy we are very near to violence exploding , Italians cannot afford the idea to get more and more poor and only look at immigration invasion that are sustained with their taxes so bank's failure, poor life condition spreading and immigration without end is making a molotov cocktail that only for few could not explode  and certainly bitcoin increasing adoption is another signal of indifference toward establishment. We are yet to see the new front Italy is going to take after making this decision on the constitutional reform and whether or not Italy will ever have a referendum wh ere it remains in the European Union or follow Britain”

“There are very diverse reasons behind the Italian vote. While some believe that  this result was mainly driven by an anti-establishment current, truth is there are several reasons behind it, first of all, the opposition to making any change to the Italian  constitution.  While the reasons behind the result are several, the effect of it will probably highlight weaknesses in the Italian banking system thus promoting more independent ways of managing our finances. Bitcoin price is affected by very many things but surely the referendum result will not benefit the euro zone.”

“The referendum didn't mean anything to the stock market or the international panorama. The effect on cryptocurrencies in Italy was zero, but this is another iron ball that has been shot to the EU wall. When also Netherlands and France will vote to leave the EU, those will be another two iron balls shot to the EU wall. THEN, the Euro will begin to fall and thus Bitcoin and altcoins will earn something from the situation, but this vote didn't add anything to Bitcoin in my opinion. When the EU will be on the verge of dismantling: that will probably be the moment when Bitcoin success will begin in Europe.”

How is banking affected?

Even before the results of the referendum were released, about eight Italian banks closed due to what experts termed as poor credit policies. It became easy for almost anyone in Italy to get a bank loan.

“A ‘no’ vote will reduce hopes of advancing the structural reform agenda, resulting in weaker growth for an already struggling economy. Italy’s growth rate in 2016 has been one of the weakest among its euro peers, weighed down by high unemployment rates and a stalling credit cycle.”

He continued and said: “Italian banks’ ability and willingness to support investment remains a key headwind to economic growth, given high levels of non-performing loans (NPL). There have been some improvements to asset quality, but stronger growth is vital to avoid any further increase in NPL stock and support the drive to improve banks’ capital buffers and future profitability.”