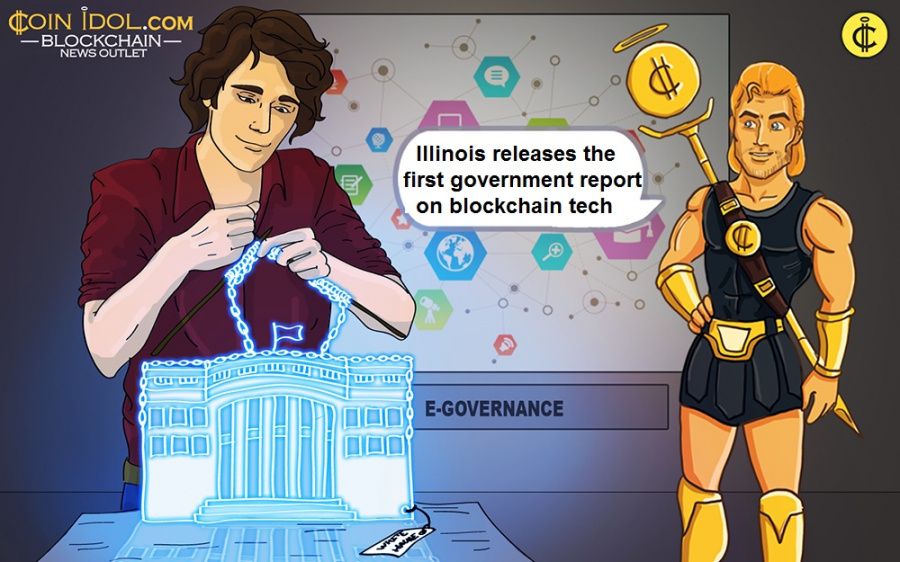 The state of Illinois has proclaimed the first official blockchain government report, evolved from a lead to examine how the technology may help encourage financial market development in the state. Use cases and potential legislative proposals for installing the financial technology to boost current government processes were mentioned in a statement issued along with the report.

According to reports, acting secretary for the Illinois Department of Innovation & Technology, Kirk Lonbom, said:

“Blockchain offers Illinois the opportunity to advance the state’s overall digital transformation and continue the establishment of Illinois as the nation’s first “Smart State.”

”Blockchain can play a key role in creating a highly efficient, hyper-connected and secure government, which translates into better services for our citizens. We are excited to further explore the value-add capabilities that blockchain technologies could provide,” he added.

The project was initially called the Illinois Blockchain Initiative(IBI), and it was officially announced in November 2016, with the main declared purpose of researching the potential market value of the new technology with regards to economic development.

On Wednesday, January 31, Illinois announced in an official statement the release of the blockchain report, paying attention to the fact that it could be found on the InterPlanetary File System (IPFS), itself being a blockchain and distributed ledger-related peer-to-peer file storage system.

Who is Behind the Blockchain System Launching in Government?

The developer of the blockchain report is the Illinois Blockchain Task Force, a group of certain members from the state’s general assembly, as well as agency and public institution representatives involved in the early stages. The organization met throughout the past four months to discuss and study blockchain, and the new report is a result of those efforts.

What is the Significance of the Report?

There are eight proposals for blockchain legislation, focused on property law and public recording in the report. The document sets this up as a section of law based on “archaic standards and paper-based regulatory guidance” and thus establishes “that an overhaul of these sections could provide impetus and direction to lawmakers interested in carrying similar updates into other Sections of law.” Several of these sections contain self-notarization, which would be possible to use via blockchain’s hash value timestamping system, and an opportunity for Illinois to align itself with the Uniform Electronic Transactions Act of 1999, which gives standards for retention of electronic records and the validity and use of electronic signatures.

Illinois was chosen to be a testing ground for the technology because it was well-suited for financial innovation due to its access to talent and support for entrepreneurship.