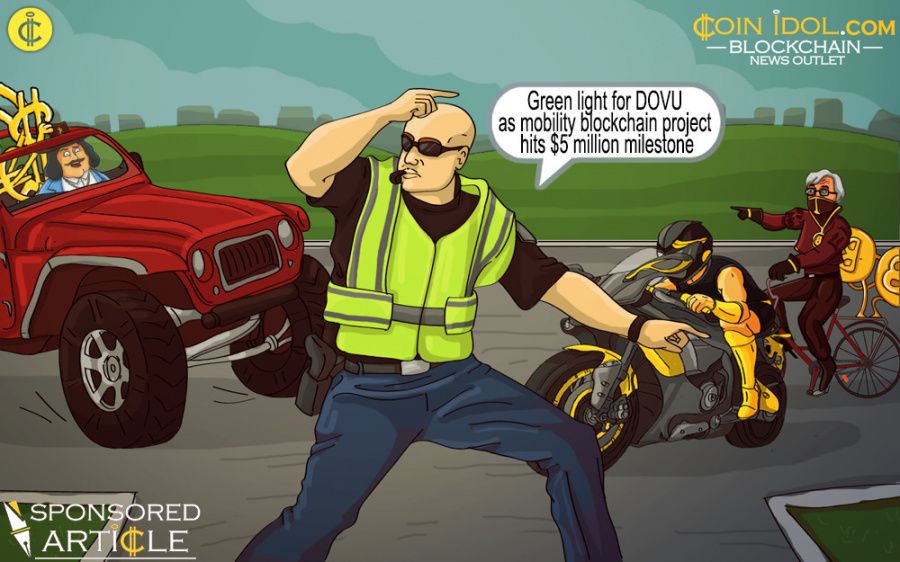 The blockchain-based transport data initiative has issued over 100 million tokens, meeting its target raise and allowing the project to go ahead.

Blockchain mobility project DOVU is off to a flying start, raising over $5 million in Ether to date. The initiative aims to crowdsource high-quality transport data from large numbers of grassroots users, storing this on the blockchain and making it available to developers and companies in return for the DOV token. Access to these valuable datasets will drive innovation in the transport industry.

DOVU’s pre-sale was extremely successful, attracting a significant number of larger investors. This has placed the project in a strong position to go forwards: pre-sale contributions have already met the project’s funding requirements for several years. The main crowd sale launched on Tuesday and any additional funding will permit an accelerated development timeline, along with an increased marketing spend.

Unfortunately, the beginning of the public crowd sale saw an attack on DOVU’s website. Many crowd sales are affected by high levels of traffic at their launch, as a lot of people try to access the site at the same time, and DOVU was well prepared for this. However, what occurred was a sustained and malicious DDoS attack that meant many users were unable to deposit funds for a period of several hours. Some of these contributors were unable to take advantage of the 10% bonus token period and DOVU took the step of extending the bonus phase for a further 12 hours. You can read more about the issues faced here.

DOVU will now be rewarding all investors who participate before Sunday with an additional token drop, to compensate for the early problems. More details will be published in due course. The token sale will remain open until 17 October 1700 UTC, with the 3% token bonus tier available until 8 October at 0500 UTC.

Additionally, DOVU will be exhibiting at the World Automotive Conference on 11-12 October in Istanbul, where the team will present its ideas to industry experts in the context of the latest transport trends and technologies.

Read this blog post for more information on how to participate the DOVU token sale, or to find out more about the initiative visit www.Dovu.io.

Tags
Million Blockchain Mobility Transport Data Token Sale Bonus
Most Popular
May 03, 2021 at 15:03
News
China Eyes February 2022 Beijing Olympics for Digital Yuan Launch but Is It Still Viable Amidst COVD-19 and Rising anti-China Movements?
May 03, 2021 at 14:17
News
Ethereum Rallies Above $3,000, Breaches More Resistance Levels
May 03, 2021 at 13:00
PR
Everything You Want to Know about Stellar, and Why it’s Getting Added to 1xBit
May 03, 2021 at 12:17
News
Bitcoin Reclaims $58,000 Support as Bulls and Bears Resume Price Tussle
May 02, 2021 at 11:54
News
South Korea Announces Testing of CBDC Right After Imposing a New Tax Framework; Is It a Coincidence?
More