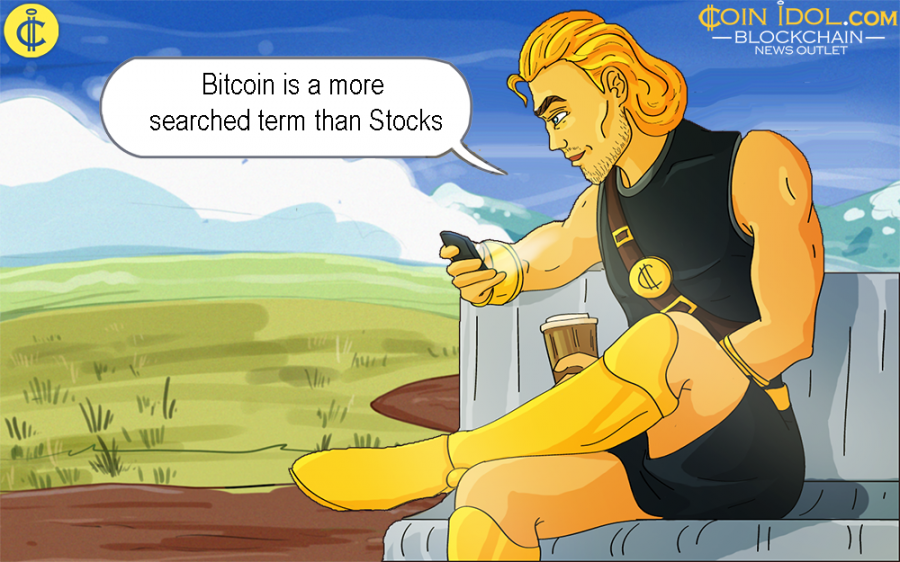 According to a recent analysis on Google Trends, it is clear that Bitcoin is a more searched term than Stocks. In this era of technological evolution around the world, several people in the financial industry are turning to using cryptocurrencies rather than traditional assets.

Before the existence of Bitcoin, the searches for Stocks on Google were massive, but now that people especially millennials are much interested in blockchain and cryptocurrencies, the love for BTC is slowly leaving securities behind.

The Google Trends’ data indicates that since the creation of BTC (2009) to the first quarter (Q1) of 2017, global searches for the original cryptocurrency did not exceed those of Stocks. Between that time, the searches on Google about shares and other traditional securities have been having an added advantage.  For example, in the month of August 2011 the popularity per month (ranging from 0 – 100) in BTC was just 1 and the popularity per month in Stocks was around 20.

Then, in the month of May 2017, searches of BTC on Google exceeded those of shares. There was also a significant interest in the globe’s leading digital asset in December the same year that saw Bitcoin trading at over $20,000 (all-time high price). The event pulled Bitcoin at top popularity of 100 and the Stocks was placed at 25. The positive trend of interest in BTC was maintained up to February last year, and from then on, the traditional assets surpassed cryptocurrency once again.

Even though traditional securities managed to maintain its regained position from the month of March last year to the end of Q1 of 2019, they failed to maintain its position in May this year. This can be attributed to the average weekly searches for BTC being lower and then increasing and surpassing that of shares. In mid-May of this year, the interest in Bitcoin skyrocketed to 61 and that of the Stocks dropped to 53.

According to the data, the top five nations surfing for cryptocurrencies especially BTC on Google, include Brazil, Turkey, Nigeria, Germany and Argentina, respectively. Then, the top nations surfing for traditional assets include United States, Canada, Singapore, India and the Philippines, resp.