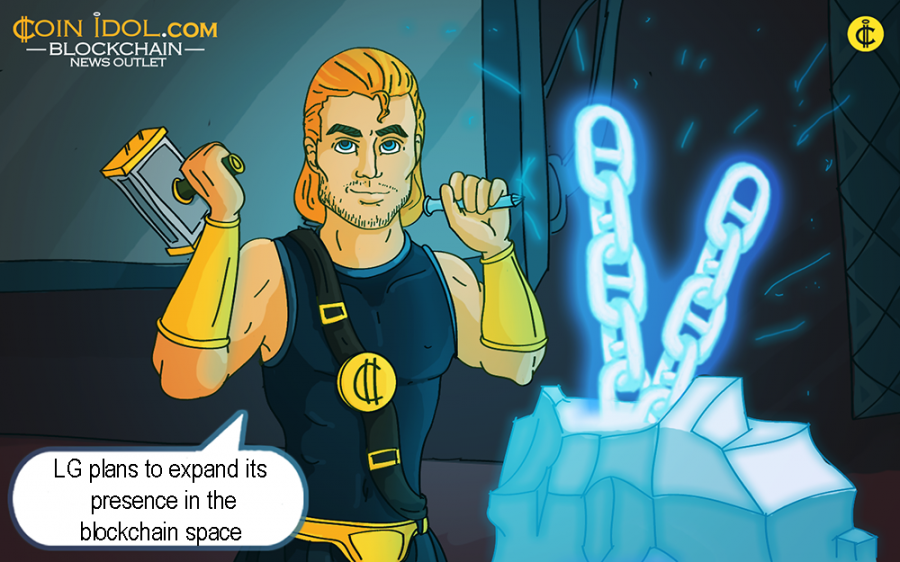 Electronic giant LG plans to expand its presence in the blockchain space. The company recently applied to register a new brand name to handle its activities. The new subsidiary will be charged with handling e-wallet for cryptocurrencies. Furthermore, the company’s IT subsidiary recently announced plans for adding food distribution services to its Monachain blockchain.

Recently, LG Electronics Inc registered a new Patent with the US Patent and Trademark Office. The new Patent tagged ThinQ Wallet is slated to provide transaction and brokerage services for electronic devices. LG manufactures smartphones, TVs, Computers and other electronic devices. The giant aims to use the ThinQ Wallet services in its future smartphones and computers.

LG currently tags all their products integrated with artificial intelligence with the ThinQ brand. The new patent includes use cases of the technology for Blockchain, cryptocurrency, and digital money. However many of the applications LG listed in their patent application still includes traditional banking and credit services.

It started working on their blockchain focused platform for monitoring the recycling of batteries used in electric-powered cars on the Island of Jeju. Another pilot project for a mobile international payment services kicked off in September.

Meanwhile, it's not just LG which is actively exploring solutions from the blockchain space. Other major Tech giants are actively inventing new solutions using the technology. Some of these giants include IBM, Microsoft, and Lenovo.
Microsoft initiated its journey in 2018. The company announced plans to use the technology in developing decentralized IDs (DIDs) app. The app was to be incorporated on to the existing Microsoft Authenticator App. However, to date, the project has not yet seen fruition.

Meanwhile, IBM started exploring technologies way back in 2015. Currently, the giant takes part in many projects. Recently, Ford Motor Company launched a distributed ledger technology on IBM existed blockchain. The platform is intended to improve the supply chain transparency for cobalt and other minerals.

Another South Korean Tech giant, Samsung, a major competitor of LG also has a series of blockchain projects in the pipeline. The company recently announced its plans to invest in a sixth-generation (6g) network. The company’s VC Jay Y. Lee believes the new network could play a major role in revolutionizing the technology.