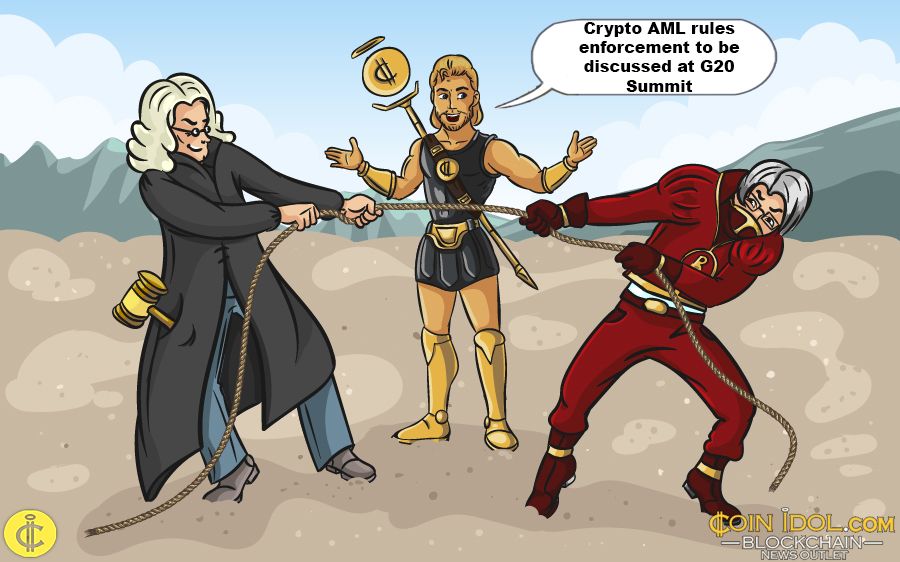 It was reported on AtoZForex on March 14, 2018, that the Japanese government will initiate a discussion at the G20 annual summit in Buenos Aires on March 19-20 to develop a unified anti-money laundering (AML) plan for cryptocurrency markets.

The concern over a “loophole” giving money launderers the ability to cheat the system would get precedence over creating a framework involving regulations for the cryptocurrency market. A Japanese official stated: “Discussions will focus on anti-money laundering steps and consumer protection, rather than how cryptocurrency trading could affect the banking system.” Also, he cited that “applying too stringent regulations won’t be good.”

Whether or not cryptocurrencies can be regulated, since it’s a decentralized phenomenon, has yet to be given a regulatory framework. Perhaps it’s difficult to regulate and this is the dilemma. Considering the public demand and very quick rise of both Bitcoin and blockchain technology along with the emergence of other less popular cryptocurrencies, the enforcers of the status quo system are in a quandary over how to proceed, so clarification will be sought at the annual G20 summit where numerous countries will gather.

Last year there were 347,000 occurrences of money laundering reported by Japanese banks. Due to these unfortunate circumstances, the regulator for the financial markets in Japan, the Financial Services Agency (FSA), will be inspecting 15 cryptocurrency exchanges.

According to The Japan Times, 170 cases of cryptocurrency money laundering were reported by currency exchange operators within a six-month period through October 1, 2017. Although operators at cryptocurrency exchanges are required to cooperate with authorities and tell them when questionable suspicious transactions occur, it may not be enough. The problem is that fast international transactions made with Bitcoin, Ethereum, and Ripple are kept anonymous but since restrictions are different in various countries and therefore inconsistent globally, it is not easy to determine if they are used in crimes.

Additionally, for the G20 meeting, the Financial Action Task Force (FATF) will prepare a report regarding the rules for preventing digital currency money laundering. FATF is comprised of 37 nations responsible for creating standards to guard against money laundering. Not only is money laundering an issue, but the risk for investors of cryptocurrency trading is a big concern.

As a result of Japan’s Financial Services Agency (FSA) watchdog’s efforts, two digital currency exchanges were given one month long suspensions due to a lack of proper procedures, ordering the two exchanges to improve their practices. The policymakers of Japan are targeting the regulation of cryptocurrencies because of the huge hack at the Tokyo-based cryptocurrency exchange Coincheck in late January.

Since the security measures were inadequate at Coincheck, hackers were able to break in and steal 523 million NEM units which amount to approximately $530 million dollars, making it one of the biggest heists to date for the cryptocurrency market.

Regulation and Enforcement May Affect Innovation

Though regulation and security measures need to be applied in order to protect the public from hackers and thieves that lurk on insecure exchanges, there is a fine line. There is so much innovation happening in the cryptocurrency and blockchain sector, that enforcing restrictions on this fast-paced market may stunt its growth.

But public demand is just heating up so by doing your own research, along with being well informed will ensure survival and thereby avoid the danger of potentially being ripped off which, by the way, happens on the fiat currency exchanges through manipulated market tactics and that’s with regulation. Remember the 2008 stock market fiasco? That was one of the biggest thefts in stock market history and cryptocurrencies were not involved.

Regardless of trading dangers on any exchange for either fiat currencies or cryptocurrencies, education, asking a lot of questions, being cautious with a balanced measure of risk, and keeping informed of financial trends is one set of strategies to consider.