Gaming Platform “Gamblica” Launches Alpha-Version for All Users with Highest RTP Ever! 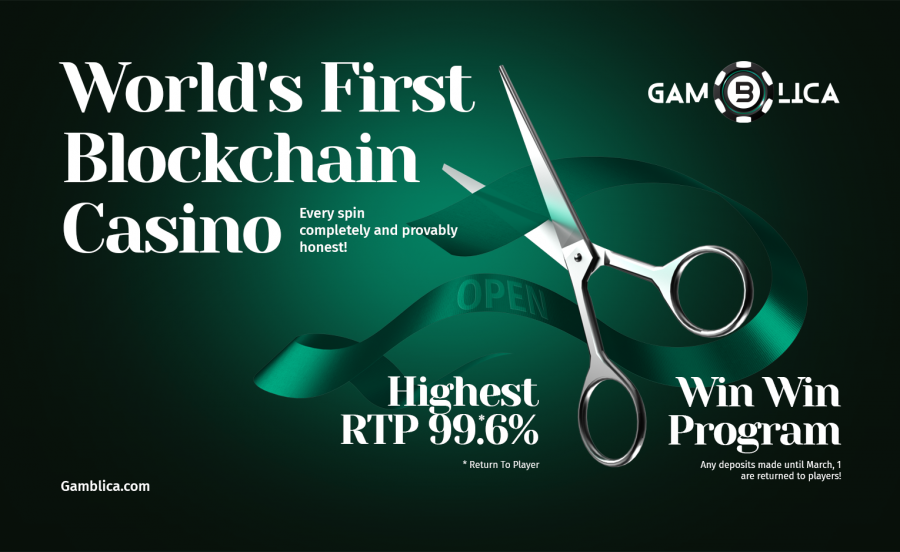 Two months have passed since the end of Gamblica tokensale. The team has successfully completed ICO, softcap was reached. There was sold 723,925,462 GMBC and contributions approximately estimated in dollars as more than $7 million. And these days Gamblica launched alpha-version of its gaming platform and let the community to try new slots in early access mode.

This is universal decision for gambling on slots, poker or sports betting. The main thing Gamblica provides is total transparency guaranteed by blockchain technology, this platform is developed by players for players. The gaming world is fed up with unfair companies and their everlasting payment delays, account blockings and hidden manipulations that make it difficult  to play and enjoy the game.

Along with alpha version of platform, there was launched Win-Win program, which will last until March 2019. The players will get back their deposits plus everything they won after obtaining official license and casino registration so that there is a good opportunity to try own luck without risks! The main aim of this campaign is to test the platform and fix all possible issues before official release.

Everyone has to try Gamblica’ slots because it has the highest RTP (return to player) value in the world! Let’s imagine that player will play 100 times a slot each time betting $1 and if RTP for example is 90%, he gets approximately $90 in wins. The highest RTP values in the market have the slots like Mega Joker – 99,00%, Cosmic Quest – 98,95% and Jackpot 6000 – 98,86%. However, Gamblica has surpassed them all! Its RTP value reaches 99,60% and this is the highest result in gambling industry for this moment. It’s easy to check the mechanism of any slot because they are powered by open smart contracts and it is impossible to break its rules.

To start playing at Gamblica everybody needs to get GMBC tokens that serve as a fuel of platform’ ecosystem. It is already listed at Tidex and BiteBTC exchanges where it can be bought anytime and now it is on its way to the Coinmarketcap.

There are more news regarding slots! Gamblica developers plan to launch 10-20 different slot machines driven by blockchain technologies by the moment of official platform release. All the players will be able to choose from variety of slots to their taste.

Gamblica platform is also about poker. Developers currently are working hard on poker room update that will unite all the poker players from the whole world in one place. Poker RNG (random number generator) will also be powered by smart contracts and blockchain, which will make the game free from unfair play, cheating and results’ falsification. The proven technology will make impossible to influence probability of hitting certain cards from the deck. This is the main advantage for any player to try his own luck in poker without any intermediaries.

One of the further Gamblica’ plans is to launch online sports betting platform. Nowadays it is one of the fastest growing markets in the Internet. According to the official statistics, 67% of the total number of bets in the world are placed using personal computers, tablets and smartphones. Every year the number of people moving from offline to online betting is increasing in significant rates. By 2025 it is forecasted, that more than 80% of bets will be placed online. However, there still does not exist a decision for secure and reliable way for betting. Gamblica breaks the market with its own platform for betting powered by smart contracts and Blockchain. Just like in poker, it is impossible to change any algorithms of blockchain.

Gamblica invites new players to join the game and to make a revolution in slots now and here!