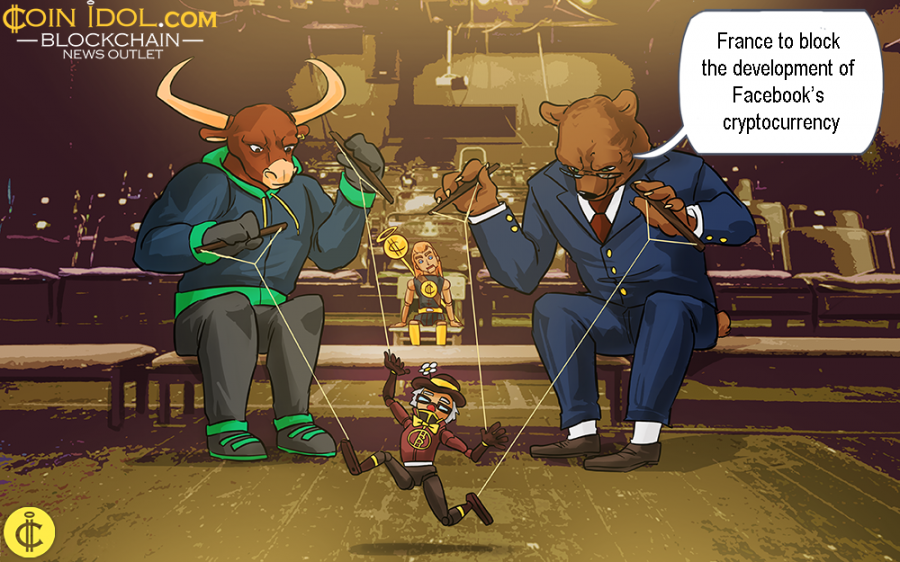 Recently, French financial authorities have shared major concerns about new cryptocurrencies being introduced onto the market. France is planning to block the development of Facebook’s cryptocurrency known as Libra claiming that the token will bring a huge risk to monetary sovereignty in the country and Europe at large.

During the inauguration of an OECD forum on blockchain and cryptocurrencies (12-13 September 2019), Bruno Le Maire, the current minister of economy and finance, made it categorically clear that under these conditions, the government can’t approve or support Facebook’s cryptocurrency to develop and flourish on the continent’s soil.

In June, 2019, Facebook officially unveiled its plans to join the blockchain and cryptocurrency arena by creating its own cryptocurrency that will be publicly launched in the first quarter of 2019 for public use. Even though the technology behind Libra has certain resemblances with the original cryptocurrency Bitcoin, its developers think that the token is a more centralized and will help to find it very easy in surpassing both the existing coins and fiat currencies including the US dollar (USD), hence becoming an international currency.

Everyone is so Scared of Cryptocurrency

The cryptocurrency is made in such a way that it can enable users to conduct various payments across Facebook’s collection of Apps such as WhatsApp, Watch, Portal, Instagram, Oculus & Messenger, which are actively used by billions of informed people from all the different corners of the globe.

The token has been created in conjunction with some of the domain’s giant payment firms but has encountered substantial regulatory inspection and criticism by different governments and authorities including the United States of America, Australia, France, China, United Kingdom and Europe.

In fact, after hearing news that Libra project is underway, France immediately planned to launch a G7 task force that will examine how traditional money banks will ensure regulations of old and new altcoins to combat their rampant usage in illicit activities including money laundering, drug trading, terrorism funding and others.

While appearing before the US Senate Committee on Banking Affairs back in July, the chief of Libra David Marcus presented some evidence when senators told him that his “Facebook doesn’t in any way deserve their trust.” In the following month, the UK political figures also voiced their burning questions and issues about the Libra initiative.

Tags
Cryptocurrency Libra France Token Europe Risk Market Finance Development
Most Popular
Jun 29, 2022 at 10:50
Price
Weekly Cryptocurrency Market Analysis: Altcoins in Recent Rallies as Bulls Continue to Purchase on Dips
Jun 28, 2022 at 12:31
Price
Litecoin Is in a Sideways Movement After Reaching the 60 Dollar High
Jun 28, 2022 at 11:11
Price
Ripple Faces Rejection at $0.38 as It Risks Further Decline below $0.34
Jun 28, 2022 at 10:06
News
The Crypto Market is Falling Apart – How to Save Your Investments and Increase your Profit in the Bear Market
Jun 27, 2022 at 12:48
Price
Ethereum Trades in a Tight Range as It Attempts to Rally to $1,700
More