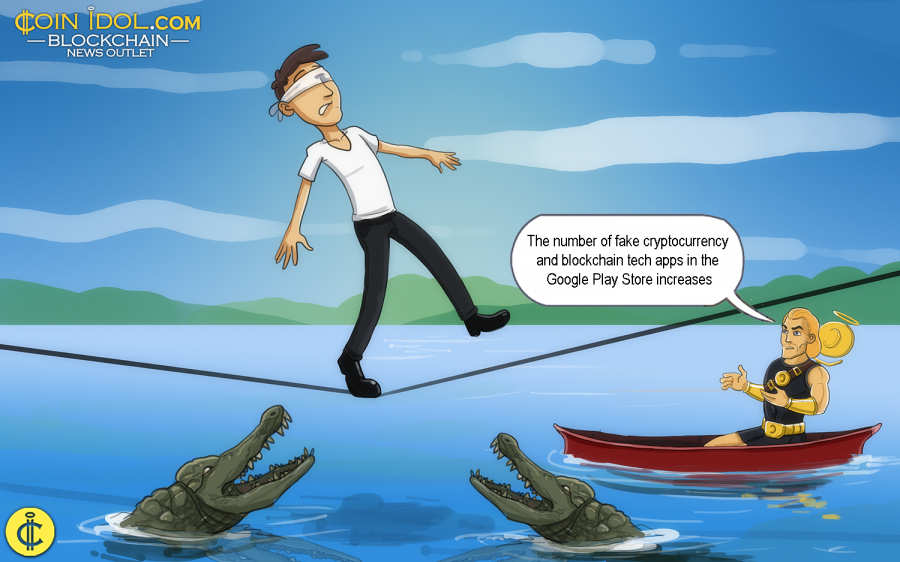 The number of fake cryptocurrency and blockchain tech apps in the Google Play Store increases along with the Bitcoin (BTC/USD) price. The cyber-criminals tend to up their dirty games when the cryptocurrency prices rise by creating different scams and malevolent crypto-related apps.

Recently, a fake app was seen on Google Play by a certain Redditor identified by his/her username as u/mooncritic. He found a fake app dubbed “Trezor Mobile Wallet” with TREZOR branding on the Play Store, and of course as a conscious person, he tried to ask whether the app is phony or not, fortunately, one of the Trezor’s staff replied by saying that the app was not from them, simply meaning that it was fake. Any genuine product related to Trezor must be officially released by SatoshiLabs.

Google Needs to Clean its House

The website holds a link to the Google Play Store, where the false app has been present since Thursday Feb 7 up to Sunday May 5 using the label “Coin Wallet – Bitcoin, Ripple, Ether, Tether”. For all this period, the app was allegedly downloaded, installed and used by over 1000 different active users.

On balance, Trezor provides hardware wallets which need physical exploitation and verification through PIN, or gen of the recovery seed, for one to have access to the stored digital currencies. Similarly, these checks and controls also work on its official app known as “TREZOR Manager.”

The website further seems to connect to Apple’s App Store, but when you try to click on the “Available on the App Play Store,” the knob just takes you to the URL of a certain PNG image.

The company (Trezor) has taken the responsibility to report the phony Trezor app to the different cybersecurity teams including that of Google. The company also informed the public that the fake app never caused any direct or indirect menace to its users. But they warned that the owners of the emails that were submitted to this fake app should make everything possible to deactivate them as they stand a big chance of being abused for phishing operations beleaguered against Trezor customers.

What Users Need to Do

Its seems that cybercrooks won’t stop this dirty game as long as bitcoin and cryptocurrency is still here. What the public needs to do to get rid of these bad players, is to observe the following few things especially when installing apps:

Hackers and Cryptojackers Have no Mercy

This is not the first fake app that has cropped up on Google Play, hackers have been trying to put phony apps on this Store with the aim of stealing crypto and credit card details plus the login identifications of the targeted companies, individuals, financial institutions or services. Some of the applications were even downloaded 1000+ times before being noticed.

Some of these apps that we are talking about include: GoMoney, Online Money, Post Finance, NetBank mobile, WBK Zachodni mobile, Bitpanda Viewer, and others. However, all these fake applications that can drag you into losses, can be easily prevented if you follow the following corporate defenses and extenuations.

Last year Google Play also had some serious problems with cryptojackers. The Play Store was distributing the apps that used users’ Android devices to mine Bitcoin, Ether, Ripple and other major digital assets, according to the report from SophosLab. These apps used to hide in the skins of “games, educational instruments or system utilities” when they were actually cryptojacking apps. Cryptojacking is a lucrative venture for bad guys since it doesn’t require much capital to start, and tends to bring in large sums of dirty profits.