Will Ethereum Classic Follow the Success of Bitcoin Cash? 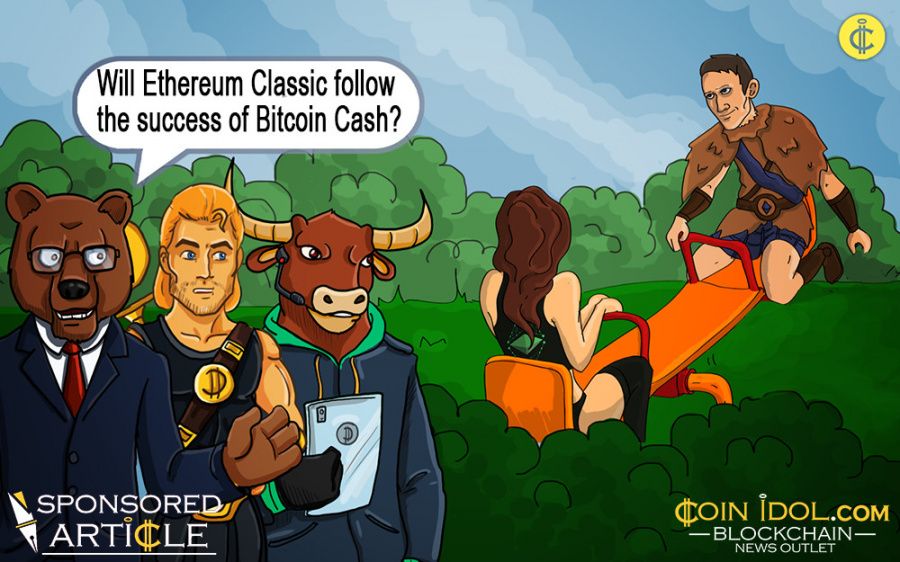 Ethereum Classic (ETC) was created via hard fork in July 2016 after the DAO hack, when a part of the Ethereum community believed that blockchain transactions should be immutable out of principle.

However, others wanted to roll back Ethereum blockchain to make sure that malicious transactions would not be included. Those who were opposed to the roll back decided to stick with the original chain, and called it “Ethereum Classic”. According to the hard fork definition, Ethereum Classic is thus the opposite of Bitcoin Cash (BCH), which launched as a new chain and the original Bitcoin continued on the old one.

Bitcoin Cash and Ethereum Classic also have a lot of similarities. They both originate from the strongest cryptocurrencies, from which they inherit their functionality and have substantial support of a big part of their original community. There are also some well known names supporting the projects, such as Roger Ver in the case of BCH and Barry Silbert, the CEO of Grayscale Investments, for ETC.

In the market, Bitcoin Cash has been performing very well lately. Its price peaked in November 2017, when it reached an all-time high of more than 0.4 BTC on the pair BTC/BCH. This spike was mostly triggered by the fact that Bitcoin failed to implement the SegWit2x hard fork with 1MB blocks, and without the long awaited 'Lighting Network', tens of thousands of unconfirmed transactions have been accumulated in the network as miners are not able to process them fast enough. This also caused the transaction fees to increase unprecedently, which paved the way for Bitcoin Cash with 8MB blocks to be seen as a viable alternative.

Can we expect a similar scenario in the case of Ethereum and Ethereum Classic and why has it not happened already? The truth is, it is quite likely this scenario will happen and the only thing which is preventing it now is the fact that, apart from some very short-term outages, the Ethereum network had enough capacity to process all transactions in reasonable time and with acceptable fees. However, this situation seems to be coming to an end as the number of ETH transactions is rising sharply and the fees are already spiking over $1 per transaction. With this trend, it seems inevitable for the Ethereum network to soon reach a point when it will also be unable to process the ever-growing number of transactions within a reasonable time frame and fee levels, at least until 'Plasma' is implemented. Due to the fact that Ethereum Classic provides basically the same functionality, eyes of those not willing to pay so much will surely look at this option.

If we compare the BCH/BTC and ETC/ETH markets, the difference is tremendous. Bitcoin Cash recently reached its ATH (All-Time-High) of 0.4 BTC and currently is sitting at around 0.15 BTC, while the ETC/ETH exchange rate is low at 0.032 ETH per ETC. Considering the above mentioned BCH vs. BTC and ETC vs. ETH similarities, there is clearly a huge growth potential for Ethereum Classic in the coming months.