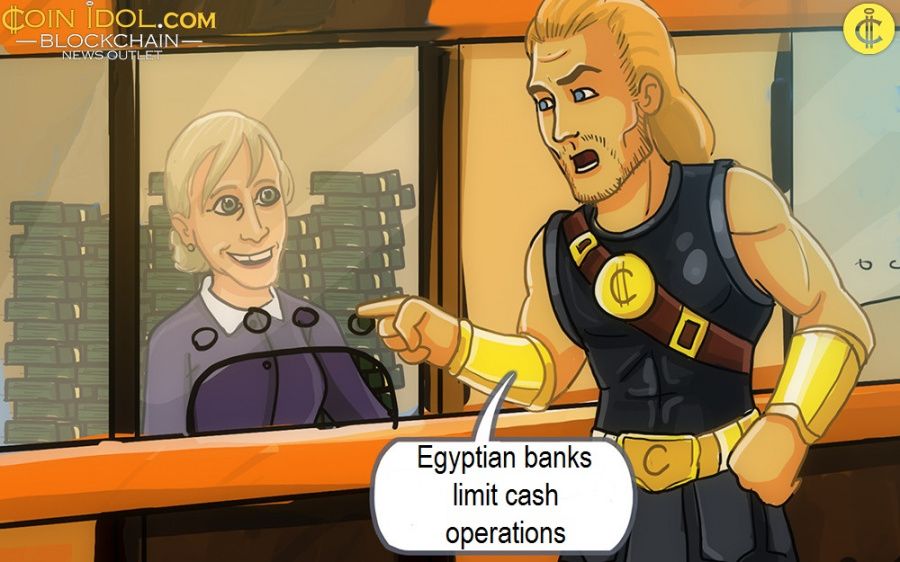 Due to the coronavirus pandemic, Egyptians started withdrawing cash from their bank accounts massively. This forced banks to limit cash withdrawal and deposits as otherwise, it might cause a crisis and default.

The limit will not only concern deposits and withdrawals using the bank’s cash desk, but also operations done via ATM machines. As of now, the daily limit for individuals amounts to 10,000 Egyptian pounds ($635). Businesses are able to withdraw 50,000 pounds with the only exception made in case they need more money to pay to their employees. ATM withdrawal and deposit transactions are limited to 5,000 pounds.

Since the beginning of the COVID-19 pandemic and the appearance of the disease cases in the country, people have rushed to withdraw cash from their bank accounts, the New York Times reported. According to the governor of the Central Bank of Egypt, Tarek Amer, Egyptians have withdrawn around 30 billion Egyptian pounds ($1.91 billion) during the past three weeks.

Such massive withdrawals could cause serious consequences including a heavy economic crisis and default in the country, so the government was forced to set up limits to prevent worsening of Egypt’s economic situation.

It seems that Egyptians do not share the overall fear of the rest of the world. While other countries try to minimize the use of cash in order to halt the spread of COVID-19 as banknotes can potentially carry the disease, they rush to squeeze as much cash from the banks as they can.

This might probably be explained by the fact that Egyptians have a lack of awareness about possible alternatives that might be less dangerous and no less effective. Meanwhile, the rest of the world turns to cryptocurrency as it allows for contactless transactions and has no limits.

Even banks seem to understand that. Coinidol.com, a world blockchain news outlet, reported that financial institutions explore the potential of digital money. For instance, Italian Banca Sella has even launched a bitcoin trading platform for its users.

Therefore, it is likely that the COVID-19 pandemics will transform the traditional financial sector and in the future, we will not see it the way it is now. While forced to stay at home, people will have time to see the obvious advantages cryptocurrency offers. Anyway, some people simply have no choice, like Venezuelans, for example.

While Egypt has just limited banking operations, the President of Venezuela ordered to completely close them. This move literally forced people to go online, leading to the number of online transactions increasing sharply. The increase was so significant, that it has caused an overload in the country’s Internet network. Well, maybe Egyptians would face the same problems with the Internet if they force all of their people to transact online, that is why they refrain from closing banks. For now, at least.

Tags
Cash Banking Egypt Crisis Coronavirus Cryptocurrency Transaction Online Money
Most Popular
Jan 25, 2022 at 12:24
Price
Litecoin Declines as Price Deepens in the Oversold Region
Jan 25, 2022 at 11:30
Price
Weekly Cryptocurrency Market Analysis: Altcoins in Oversold Regions as Buyers Regroup for a Price Rebound
Jan 25, 2022 at 10:32
Price
Ripple Fluctuates above $0.56 as Bears Threaten to Resume Selling Pressure
Jan 24, 2022 at 12:12
News
30 YouTube Channels Hacked; Is it Another Reason for Bloggers to Switch to Decentralized Streaming Platforms?
Jan 24, 2022 at 11:15
Price
Ethereum is in a Tight Consolidation, May Slide Below $2,300 Low
More