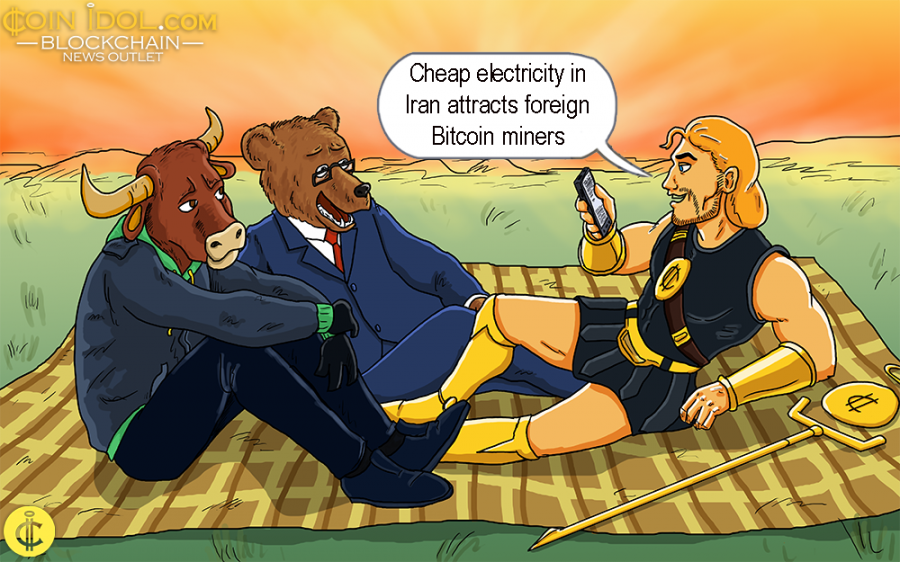 As very many bitcoin miners in the world have attempted to close down their mining equipment, other miners are doing everything possible to find alternative means of surviving. Iran has come out to attract overseas miners because of its $0.006 cost for each kilowatt consumed in one hour. This makes it one of the low-cost power activity in the country.

Bitcoin mining activity consumes a lot of electricity, so miners will only make profits if the cost of power is favourable and any accrued expense isn’t greater than mining operation cost. Some countries like Norway, for example, have removed electricity tax subsidies for all cryptocurrency miners, as earlier reported by coinidol.

According to a report by Aftenposten, a Norwegian member of parliament, Lars Haltbrekken, indicated in the report:

“Norway cannot continue to provide huge tax incentives for the most dirty form of cryptographic output like bitcoin. It requires a lot of energy and generates large greenhouse gas emissions globally.”

A blockchain technology researcher at Areatak, Nima Dehqan, said that the company have been in talks with potential foreign investors who want to start carrying out mining in the country. Some of these investors are from France, Spain, Armenia, and Ukraine.

Areatak has officially signed a great deal with Coinpods - a Spanish mining company, such that it can become a local partner and create mining farms in Iran.

The whole process will have three major phases, Dehqan explained:

“First is sort of a just-to-make-sure testing phase, which is already in place. Second is building new infrastructures together, which somehow has already started, too. And the third will be gathering more investors from outside of Iran.”

It seems some Chinese miners have already started walking the talk. An infant company that is based in Chengdu, China, though it didn’t want us to disclose its name in fear of a negative government action, said that it has by now sent around 2,000 miners in Iran.

“Iran has vast natural gas resources and thus the electricity cost can be as low as 0.04 yuan [$0.006] per kilowatt-hour. But Iran doesn’t really have any firm making miners. Now that secondhand miners are being sold cheaply in China, it’s a rather reasonable business decision. With electricity that cheap, you can generate profits in one to two months,” the company said in a statement.

Dehqan further said that it is very difficult and risky to place foreign miners inside Iran due to several reasons such as the Islamic Revolutionary Guard Corps on the border.

“There’s the risk of miners being detained and confiscated at the border. While some logistic companies may have an insurance policy to cover the loss but you can only get compensated by fiat and miners will be gone,” the firm said.

However, on August 6, 2018, president Trump proclaimed that the US would impose heavy sanctions again with effect from August 7 on Iran after retreating from a nuclear agreement that was first entered in the year 2015 by the U.S government. It is reported that the EU, China and Russia are seeking to support the agreement such that businesses and financial transactions can be enabled in Iran.