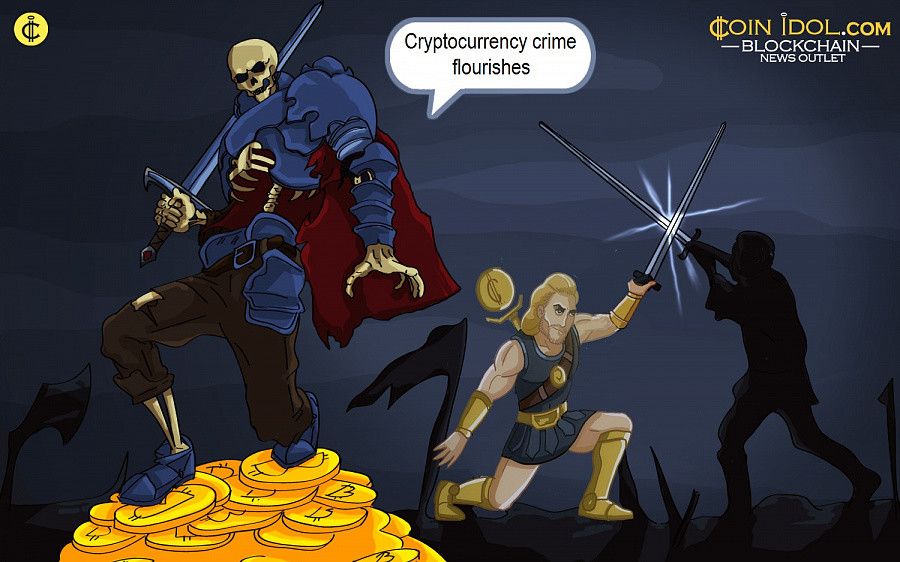 During the first 5 months of this year, the amount of damage caused by crimes related to digital currency amounted to about $1.4 billion, according to CipherTrace research.

A document dubbed “Crypto Crime and Anti-Money Laundering Report” indicates that the amount of damages surged to $1.4 bln as cryptocurrency-related theft, seizures, hacking and fraud multiplied from January to the end of May. Such a surge has become possible due to the spread of the COVID-19 virus, putting the entire planet on lockdown, leaving many industries vulnerable.

Taking on cryptocurrencies at a high rate

Well0known old schemes are flourishing with new intensity in the view of the pandemic. They include ransomware, Ponzi schemes and fake investment opportunities. However, with the rise of the virus, there have been some new schemes directly related to COVID-19, as coinidol.com, a world blockchain news outlet reported.

Moreover, there has been an entirely new cryptocurrency devoted to the disease. It was named CoronaCoin and based on the number of infected people and those who died of the virus. As you might have already guessed, it was nothing but another fraud scheme. Soon enough, the community became alerted about the projects, with warnings against investing in this coin appearing in the web. This forced the developers to vanish without a trace. The CoronaCoin website also ceased its operation.

Among other widespread schemes related to coronavirus are fake requests for cryptocurrency donations. Fraudsters impersonate legitimate organizations such as Red Cross, World Health Organization etc. and ask users to help them battle the pandemic. In fact, the real Red Cross and WHO actually accept donations to fight the virus, but none of them accepts cryptocurrency. There were also cases of stealing personal info through fake applications, cases of selling fake masks, treatments, diagnostic kits, etc.

Many fraudsters have targeted the healthcare industry as it is the most vulnerable during the pandemic. The most widespread scheme, in this case, was capturing clinical systems with ransomware and demanding cryptocurrency payments for releasing the patients’ data. Otherwise, scammers threatened to leak the patients’ personal information and clinical history on the web.

The WHO, as well as other medical research firms, reported severe and numerous attacks on their servers after the COVID-19 outbreak. This made the cybersecurity industry join forces and establish an initiative called Cybersecurity Volunteers to fight criminals and their activity. Some representatives of the cryptocurrency community also joined this initiative to battle hackers.

However, the most damage this year was recorded from a Ponzi scheme originating from China. The startup called WoToken pledged elephant profits through algorithmic trading bots and collected about $1 billion USD from venture capitalists. It is known that only 71k victims were badly affected. As of now, the scheme has been exposed and six individuals operating it are under arrest. Some of them are assumed to be previously involved in another similar scheme called Plus Token.

In this year alone, more than 68k cryptocurrency crime reports were filed to an illegal activity database BitcoinAbuse. The crimes increased by 1,300% in April. Actually, there were around 48,370 reports filed in April in competition with 3,684 reports in March 2020 – and this could be because of the large number of the vulnerable quarantined population trying to observe the coronavirus measures like working from home, especially working online.