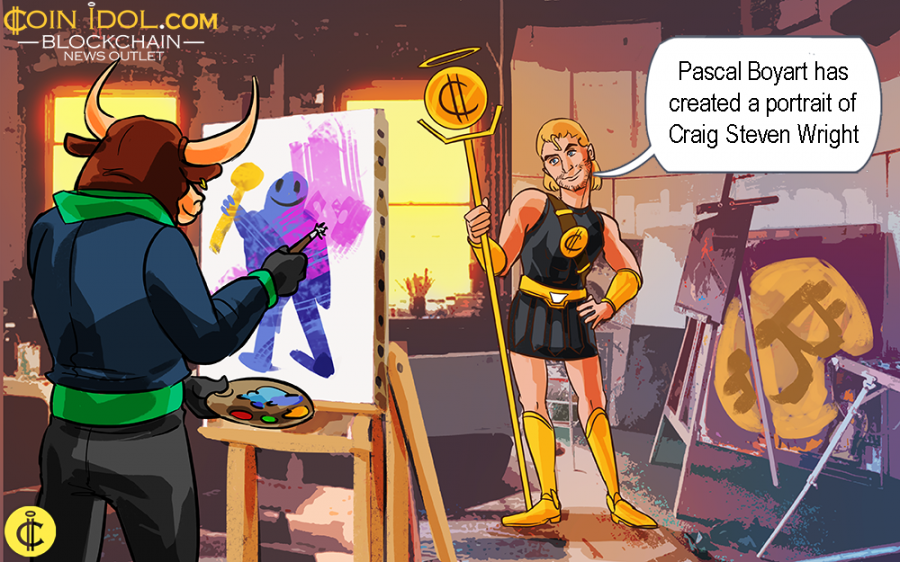 Pascal Boyart, a French artist who has become popular from the cryptocurrency-related art pieces he normally paints, has now created another interesting but contentious portrait of Craig Steven Wright, an Australian man aged 48 who claims to be the Bitcoin inventor - Satoshi Nakamoto. The portrait is actually entirely made of pink and white toilet papers. Pascal has elevated Bitcoin, digital currency, blockchain and commercial industry to higher heights.

The Frenchman’s latest artwork attempts to hit Craig, now being called “Faketoshi” by the cryptocurrency community for his regular claims of being the main part of the group that developed Bitcoin (BTC), the oldest digital asset, and also claiming to be the character behind the fictitious name Satoshi Nakamoto. The Craig’s portrait is exposed under lights carrying a controversial term “Fake Satoshi” painted on his forehead.

Boyart is also distinct for always making challenging art pieces and never lacking groundbreaking ideas when it comes to blockchain and cryptocurrency. For instance, in his recent bitcoin-related artwork, he hidden a $1,000 prize in “La liberté guidant le peuple 2019” in Paris, France, during the time when Bitcoin was celebrating its 10th anniversary. The prize that was embedded in the art piece was the public wallet address holding around 0.26 Bitcoin. Up to now, no one has ever discovered the hidden prize.

#StreetArt treasure hunt in Paris with a #Bitcoin puzzle
For the 10th birthday of the genesis block, I painted this frescoe in Paris with a 0,26btc ($1000) puzzle in it.
Here's the public key: 1NqPwPp7hEXZ3Atj77Ue11xAEMmXqAXwrQ Thanks to @alistairmilne for sponsoring this pic.twitter.com/F7aIkxmp6t

Furthermore, earlier in 2019, Boyart collected a BTC donation worth over $4000 because of the murals he did, and the artist was appreciative of the financial support his fans showed. It is assumed that the donation has now reached around $9,000.

The artist has a dream of changing this embryonic revolutionary technologies of digital asset and blockchain using his art talent and creativity. He normally advises his fellow artists to always hid Bitcoin, Ether, Ripple and other symbols of the major cryptocurrencies so as to allure and give surprises to people who love buying portraits and other art-related products.

As you can remember, Craig Wright promised to sue anyone who prompts to threat, abuse, provoke him on the matters of his aforementioned claims. Let’s wait and see how this inflammatory artwork by Pascal will make Wright react.