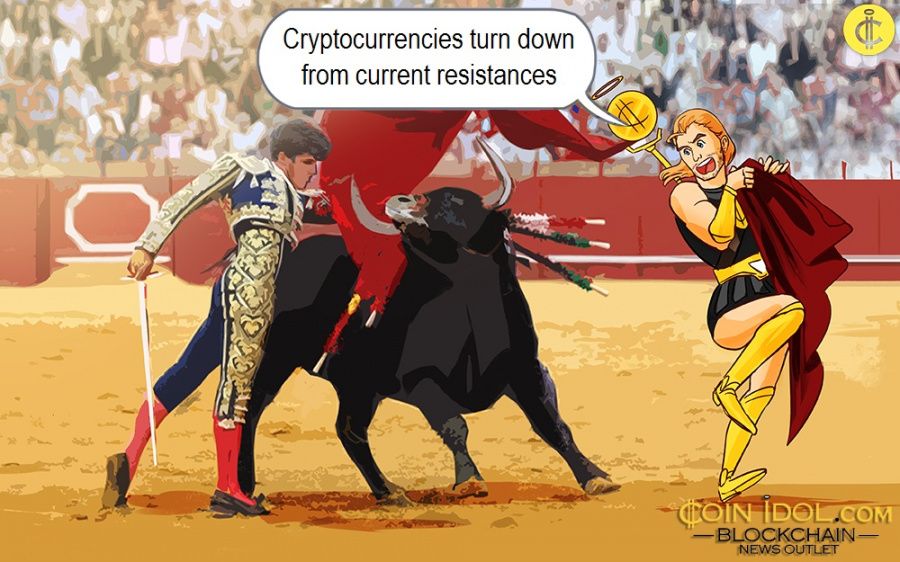 In the week under review, DASH, Dogecoin, Cardano, and TRON were previously making positive moves. In recent times, all the coins have dropped in value as the coins hit the overbought region. Stellar also is in a downward movement as it reaches the overbought condition.

Presently, DASH broke the downtrend line and resumed an uptrend. The tremendous move reached a high of $140. Buyers could not sustain the uptrend move as DASH fell to $100 low. At the current low, the price rebounded and retested the resistance at $140. Buyers were unsuccessful at the second attempt and the price continued its downtrend. DASH is falling and if it finds support at $100, the uptrend will resume. Presently, DASH is trading above level 48 of RSI period 14. DASH is below the centerline 50 which indicates that price may fall. 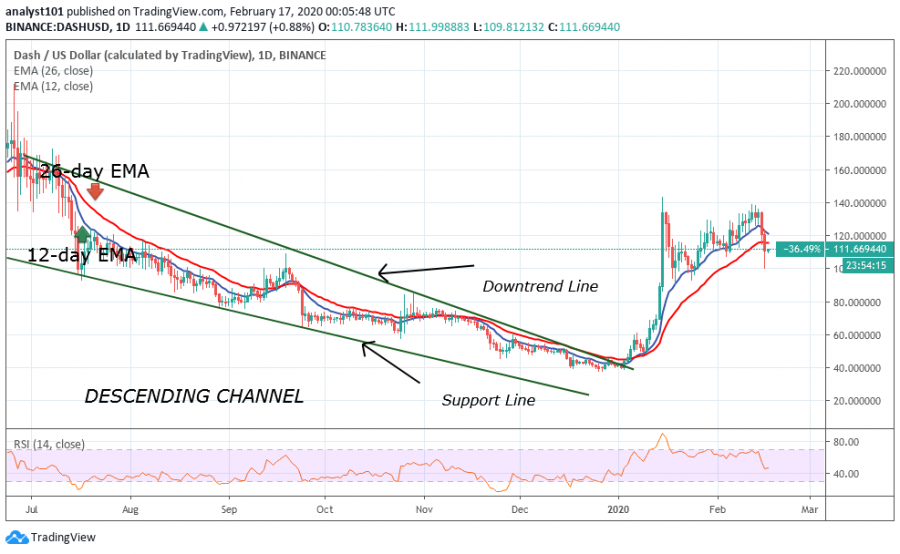 In recent times, Dogecoin was in an uptrend after successfully breaking the downtrend line. The DOGE broke the resistance and moved up to a high of $0.0035. The uptrend was interrupted as buyers could not sustain the uptrend. From the high of $0.0035, the price fell to $0.002737. The upward move may likely begin if prices find support at $0.002500. Meanwhile, DOGE is below 60% of the daily stochastic. It implies that DASH is in a bearish momentum and likely to fall. Nonetheless, DOGE has fallen to the support of the 26-day EMA. The uptrend is likely if the support holds. 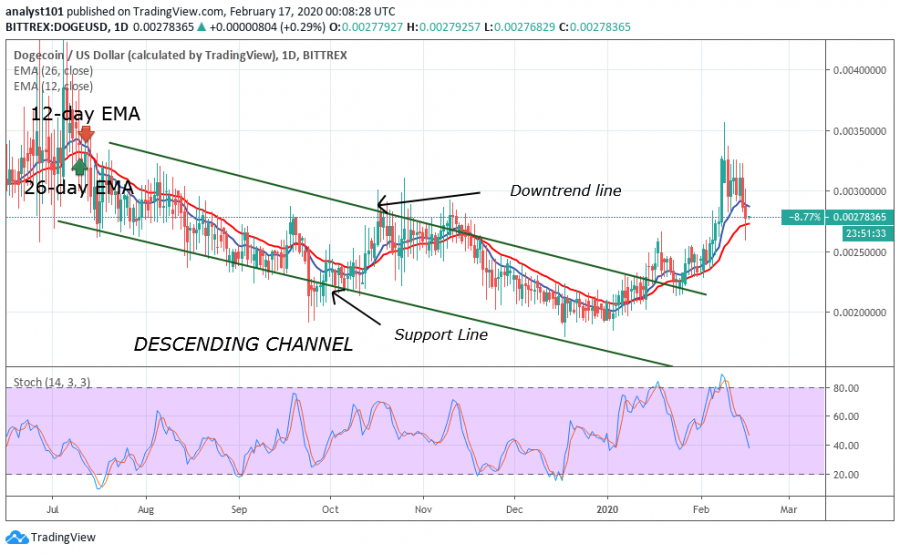 Cardano has been making a remarkable run after breaking the downtrend line in October 2019. The bulls reached a high of $0.0070 but were resisted. ADA fell to $0.05953 level which was the former price level in July 2019. There is a likelihood of price upward move because the coin fell to the support of 26-day EMA. According to the RSI, ADA reached a high of $0.0070 and was overbought. Sellers have pushed ADA downward to level 54 of the indicator. 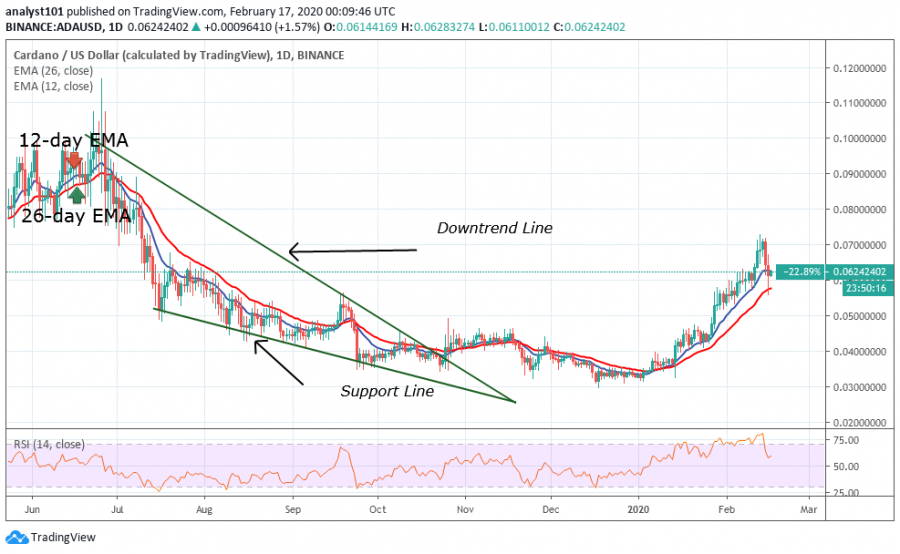 TRON was making an uptrend after breaking the knotty price level of $0.022. The bulls took the price to a high of $0.026. The market reached the overbought region of the daily stochastic. In the overbought region, buyers are not available to push the coin upward. Rather we have sellers who pushed TRON downward. TRON has fallen to the support of the 26-day EMA. Incidentally, if the support holds, the upward move will resume. 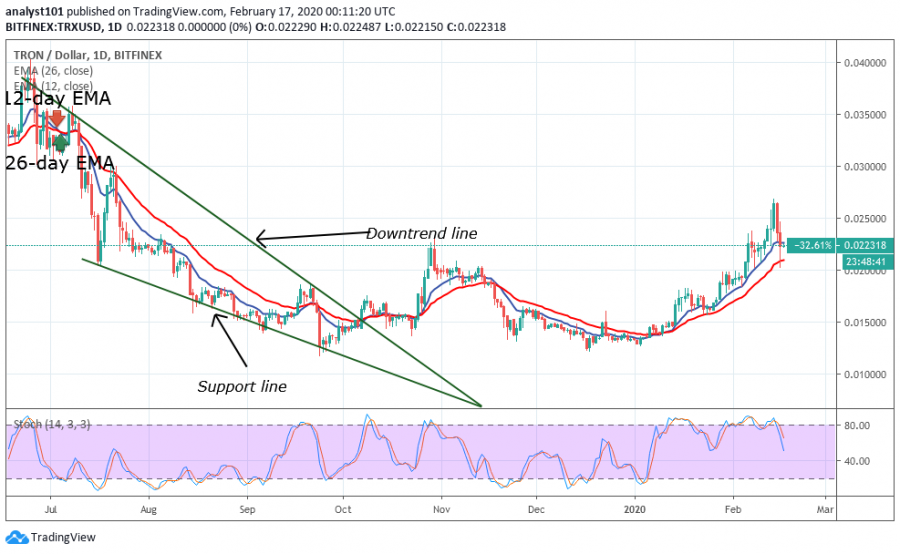 Stellar (XLM) is still in a range-bound movement. The pair is still trading below the resistance at $0.090. In 48 hours ago, the bulls attempted to break the overhead resistance but were repelled. The price has dropped to the support of the 26-day EMA. The uptrend is possible if 26-day EMA support holds. XLM has fallen to level 53 of the RSI period 14. This indicates that XLM is still in the uptrend zone. Stellar may rise. 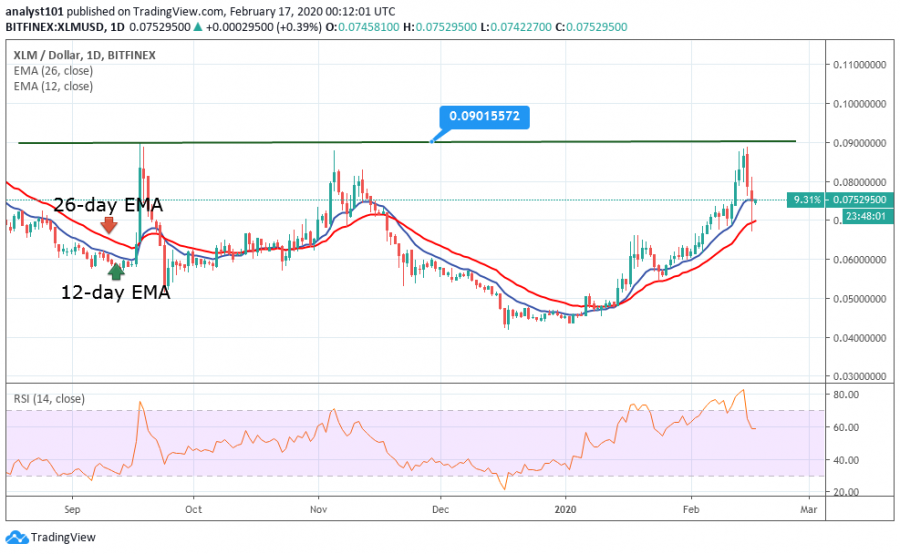