Crypto Price: Will We See Bitcoin Trading at $1,800 Before a Bull Run? 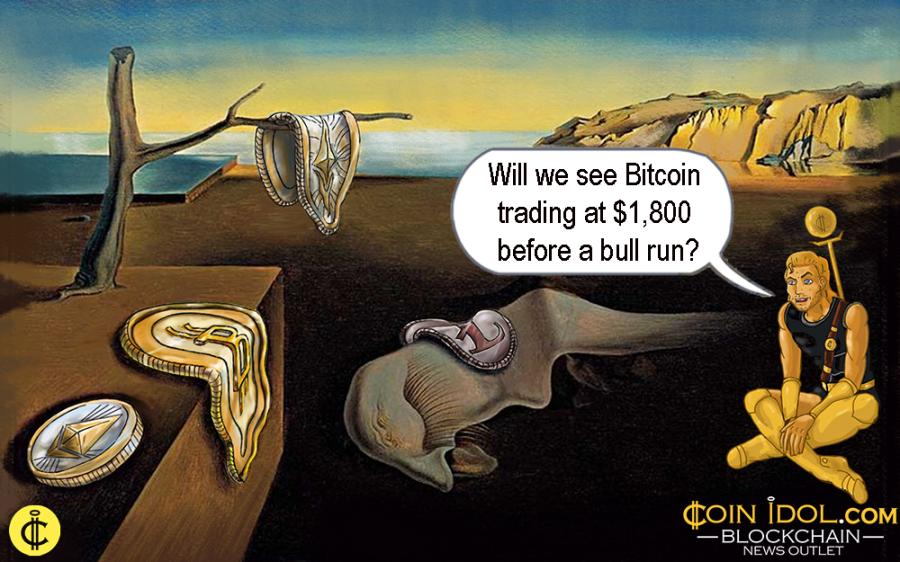 For almost 60 days now, Bitcoin (BTC), the leading crypto by market cap, has astonishingly held its own, failing to break below the $3,000 price level several times. This forced massive crypto traders to think that $3,000 will be the point level at which Bitcoin lays low in the latest market cycle (accumulation, uptrend or markup, distribution and downtrend or markdown phases).

The hypothesis has certainly taken hold, particularly among those anticipating that digital currencies will start to spike higher in the coming weeks, but some traders are suspicious that lower depressions are coming. For instance, Anthony Pompliano, the head of Morgan Creek Digital Assets, has commented on several podcasts, social media platforms, and publications that BTC could more likely fall below the promising $3,000 level.

A popular cryptoasset trader with the nickname “The Crypto Dog,” indicates that it will not be surprising if the digital currencies plunge another approximately 50% from their present value levels. The Crypto Dog via twitter revealed that a $1,800 Bitcoin and $50 ETH is not in the region of the hypothesis. 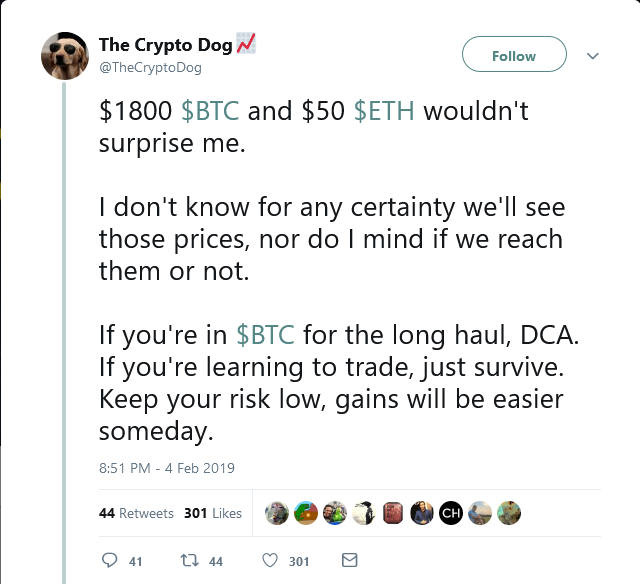 The Crypto Dog also drew attention to all those people calling for BTC to drop to around $1,200, which was the extreme of the 2013 bull market and the region that influenced 2017’s magical rally. He also maintained that $1,800 is not as freakish as it may appear on the ground.

The possibility of institutional investors penetrating the cryptoasset market this year via trusted stewards such as Fidelity, Bakkt, ICE and Nasdaq may stop bears from razing Bitcoin to 2013 – 2014 levels.

Furthermore, the Crypto Dog revealed that as long as BTC remains in the wide range between $3k - $5.4k, the cryptoasset market is still in the last leg of the lasting bear market.

Also, the BTC bull market was a big bubble which got burst last year, but the afflictive event had a significant upside: it attracted a lot of funds and talent to the developing sector, according to Matt Hougan, the global head of research at Bitwise, developer of the globe’s first crypto index fund. Matt also revealed that 95% of cryptos which exist today will implode into extinction, claiming that it’s a very good thing for the crypto market:

“There are 2,000 cryptos out there; 95% of them are useless and will die a painful death. The sooner that happens, the better.” “But from those ‘ashes,’ will merge important things. Just like from the dotcom ashes emerged Amazon, Google, and Facebook, etc."