COSS for a Good Cause: Charity for Crypto 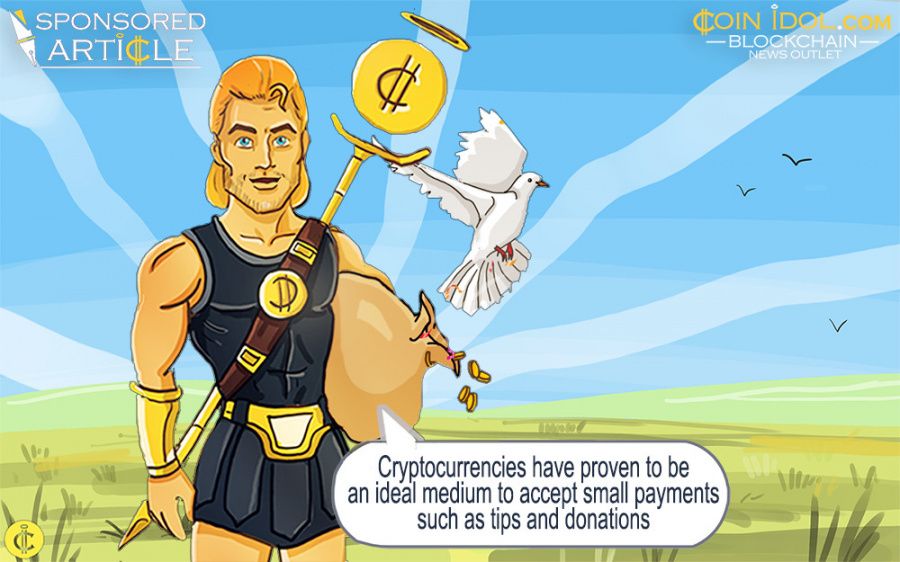 With cryptocurrency around the world in 18-24 months.

Throughout their short, but promising history cryptocurrencies have proven to be an ideal medium to accept small payments such as tips and donations, gaining huge popularity among the nonprofits that have learned to benefit from BTC, LTC, DODGE, etc. at quite an early adoption stage of the crypto.

We have interviewed David Wu, a person who organized several successful charitable events having raised money to repair and upgrade houses in the rural areas of Malaysia that were damaged by the flood in 2014. Later this year David Wu, a partner of several food and beverage outlets in Singapore and Kuala Lumpur, will visit the Seven Modern Wonders of the world on his bicycle in an effort to raise money to help children suffering from cancer. In the meantime, he will be figuring out how to survive on the road with nothing, but crypto. A Singapore-based company named COSS will supply him with cryptocurrency for this trip. 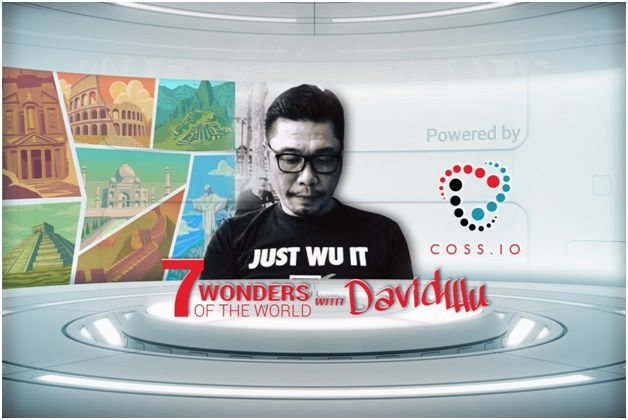 David, what's your background? Are you a full-time traveler?

David: First of all, I shouldn't be categorized as a traveler in the traditional sense, but rather as someone who stumbled upon unconventional methods to help raise funds to help the lesser fortunate. I was (and still am) a partner in an F&B business in Singapore, and decided to return home to Malaysia in May 2015 following the death of my sister from cancer a few months before that.

I am a Malaysian by nationality, and a mighty-proud one too. So, I chose to come back to Malaysia in order to see how I can contribute to the less fortunate. To give back to society or pay it forward, so-to-speak. It was a big decision on my part, as there naturally were many considerations to weigh before I made up my mind. I had by the time spent a considerable amount of years in Singapore where my children still reside.

What was your first travel for charitable purposes?

D: Upon my return to Malaysia, I actively pursued a cause to champion. I was considering various organizations to see if I could contribute. Soon after I came across a report which highlighted the plight of the victims of the December 2014 flooding on the east coast of the Malaysian peninsular. I decided to volunteer during the flood, and together with a friend headed to the damaged areas to see what we could do. We raised a considerable sum of money through public contributions and set out to purchase the basic necessities (food, water, medicine, etc.) and distributed them individually to villagers who were affected by the disaster.

Following the flood, I realized that many folks were unfortunately still living in less than desirable conditions, so I decided to return the area again to see what I could do. To cut a long story short, I found myself in a small village with 10 homes in it and initiated a community project to help repair the dilapidated houses and called on the public to contribute. We managed to raise the desired amount to cover the cost for the repairs. I was also hoping to highlight to fellow Malaysians that as a collective we can help those who are less fortunate simply by playing our parts, large or small. That was essentially the message and call to action.

One of the challenges I undertook to raise funds was to walk from Kuala Lumpur to Kota Bharu in the state of Kelantan. It was a solo effort, which covered 600 km of the road, and took 23 days to complete. I started the walk on what would have been my sister's 50th birthday on Sept 9, 2015. The project was named Projek Wumah, a pun from the words Wu (our surname) and Rumah (the Malay word for home). It was a tribute to my late sister and in remembrance of her service to the public at large. My late sister, Dr. Wu Loo Yee was a plastic and reconstructive surgeon at Kuala Lumpur Hospital. We managed to raise RM 150k by the end of the walk.

What was the longest distance so far?

D: The longest distance I had covered was a bicycle ride from Malaysia to China in May 2016. It covered over 4000 km and was a sponsored ride, again to raise money for the poor and disadvantaged under Projek Wumah in collaboration with a friend who does a lot of aid work around Malaysia. The cycle took 69 days to complete.

Do you somehow prepare yourself for long-distance travels?

D: I actually make no preparations for my 'adventures' whatsoever. I adopted a famous sporting brand's mantra and coined the "Just Wu It" tagline to basically say don't think too much, talk less and just do. Be impulsive, be spontaneous and throw caution to the wind, basically. There was no training for the walk at all. I figured I would only get stronger as the days go by. Yes, it did hurt badly for the first few days but I recovered soon enough. There was also no physical preparation for Cycle to China (as it was called) because again, I believed that I would get stronger as I pedaled. Both journeys were in fact bigger mental challenges more so than physical ones.

What was the most challenging thing/event you experienced on the road?

D: I guess the most challenging day I've had on the road was on what I will always remember as Day 46 during the cycle to China. I was riding through the beautiful mountains of Laos. Having started that leg from Vang Vieng to Luang Prabhang at 8 am, I spent most of the day climbing uphill. By 7.30 pm it was already dark and I had no more energy left to keep pedaling uphill so I got off my bike and pushed it up the hill for the next 15 km. It was an exhausting push in total darkness. I went on till almost midnight when I reached the peak and had a wonderful 6 km whizz downhill till I reached my stopper for the night. It was quite frightening being in the mountains all by yourself, in pitch blackness and totally exhausted, but I survived that and it only made me stronger mentally. I will always remember that day.

What are your biggest achievements for charitable purposes?

D: I have helped to raise circa RM350k from these adventures and all the money went towards repairing the dilapidated homes of the poor. Close to 40 families have benefited from the efforts, and the aid was given with no strings attached. Completely unconditional and that, I would easily say, is the best feeling one can have. I hope my late sister is looking down with pride, but most of all, I think the greatest satisfaction I've had was to know that if you put your mind to it, anything is possible. And to know that someone's life is better for it means a great deal. To be able to offer others hope is somewhat priceless. I don't think any of the beneficiaries know from where or how their windfall came about and that's really cool. I really didn't think they needed to know.

Which projects are accomplished and what are the results?

D: Projek Wumah was completed in April 2017 after 10 months from initiation. Projek Wumah 2 is still ongoing and many homes have benefitted from the aid at this point (see photos). 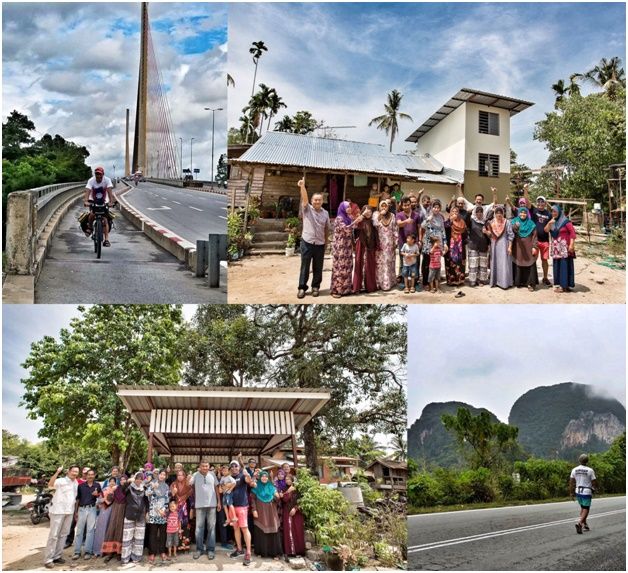 What are your plans for the next journey?

D: The next challenge will be cycling to the 7 modern wonders of the world. Visiting these locations would be a dream come true, but to cycle to all of them would be surreal. I have always been fascinated by these locations but never been to any of them yet despite having traveled quite a bit. The flag off will be on Aug 31 2017, coinciding with Malaysia's 60th national day.

Throughout the journey, I am planning to raise awareness and funds for childhood cancer, working alongside the National Cancer Society of Malaysia (NCSM). We hope to reach at least 5 million urban Malaysians to chip in a minimum of RM1 per person to help children with cancer. I have trust that we will achieve it. Let's hope that the "anything is possible" mantra again will bear fruit. Wish us luck because we will certainly be needing lots of it.

COSS will be the main sponsor for David’s trip around the world providing him with a payment card and cryptocurrency wallet(s) so he can actually pay his way around the world by using cryptocurrencies. He will be funded by COSS in 5 stages throughout his trip. Initial preparation costs leading up to the start of the ride has already been fulfilled by COSS.

The Visionary Officer and Co-Founder of COSS, Rune Evensen, shared:

"At COSS, we are very excited about this collaboration with David, and having seen his previous successes are pretty assured of the positive outcome of the campaign. This is the second time we are teaming with charities. We have been contacted by a Romanian charitable foundation Mereu Aproape previously this year that was willing to start accepting donations in crypto. With our payment gateway / POS it can actually be done very easily: companies, businesses, online stores and nonprofits can plugin to the COSS system and collect donations in various cryptocurrencies.
Increasing the awareness about child cancer is a great purpose and we want to be at the front supporting such initiatives, especially once we have developed a solution that will introduce NPOs to a huge audience of cryptocurrency users globally. This also goes along with our goal to boost the adoption of cryptocurrency.
Having known David personally for some years already, I am 100% convinced of his determination, integrity and passion for this trip, and I am honored that COSS can contribute to his great ride and cause. We would also like to reach out to others in the cryptocurrency/blockchain community, if they think they can/will contribute in any way, shape or form. For this purpose, we have issued a dedicated crypto wallet so that the others can contribute to David's great cause."

COSS will be posting frequent updates about David's trip, you can follow his journey and support him on coss.io.

COSS stands for "Crypto One Stop Solution" and represents a platform that combines all aspects of a digital ecosystem based on cryptocurrency. The COSS platform addresses the massive adoption of cryptocurrency by means of the features such as: payment gateway / POS, merchant list, digital marketplace, e-wallet, exchange, etc. It is currently pre-selling its revenue-generating token, named COSS, that can earn its holders the revenues in all other cryptocurrencies. For details visit: https://coss.io/ico You can follow the updates from COSS via Twitter, Facebook, YouTube and LinkedIn.

David Wu is an entrepreneur and partner of Uncabunca in Singapore and The Banker's Draught in Kuala Lumpur, who organizes charitable fundraising events since 2015 including Projek Wumah, Cycle to China and the upcoming journey to 7 wonders of the world by bicycle. You may contact David directly via email: kedahwu@gmail.com or follow him on Facebook. Feel free contributing to David's journey here or by means of the following QR-code: 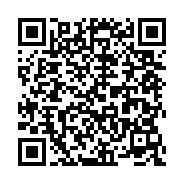