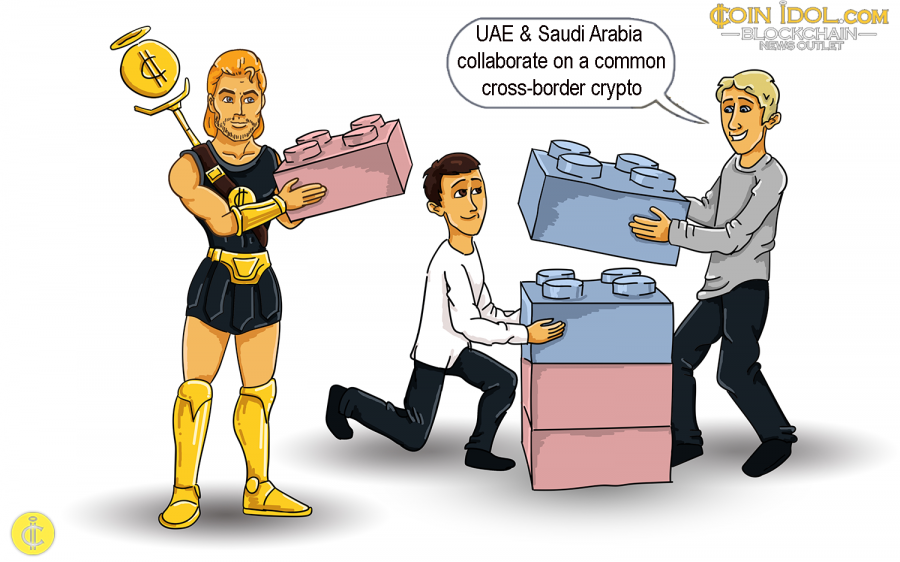 It’s now officially confirmed that UAE and Saudi Arabia will collaborate and work on a cross-border cryptocurrency, though the actual date and time when this will be done is not known. The crypto is strictly targeting banks not clients.

According to a report from Gulf News, an Arabian news media outlet, the central bank of United Arab Emirates (UAE) together with the Saudi Arabian Monetary Authority (SAMA), will form a cross-border crypto which will be effectively applied between these two great nations.

This effort started far back in December 2017 when the governor of UAE central bank, Mubarak Rashid, uncovered the details of a joint initiative between the central bank and SAMA to create a blockchain-based digital currency to improve cross-border transactions taking place between the two nations, Gulf News reported.

At that moment, the governor told the public that the responsible institutions were still ascertaining the technology required to run the crypto. Mubarak, albeit, was very positive about its implementation once the project was completed.

At the meeting, the governor told the audience that both financial authorities were not completely done with the research, and that the framework specifying when it will be completed and which parties are to be involved, wasn’t yet in place.

“This is probably the first time that witnesses the cooperation of monetary authorities from different countries on this topic, and we hope that this achievement will foster similar collaboration in our region,” he noted.

Regard ICOs as a Security

UAE has for a long time been yearning for distributed ledger technology (DLT) and digital assets as well. In October, 2018, UAE was considering whether to approves ICOs as a legal means of funding, particularly for private firms operating within the Emirates. It was also promising to thrust out an effective regulatory framework in the second quarter of next year.

“The board of the Emirates Securities & Commodities Authority has approved considering initial coin offerings (ICOs) as securities. As per our plan, we should have regulations on the ground in the first half of 2019,” said Omar Saif Al-Zaabi, chief of UAE securities market regulator.

In a separate official statement, the Central Bank of UAE revealed:

“CBUAE and Sama intend to execute a joint crypto-currency and Distributed Ledger Proof-of-Concept (PoC). The PoC’s design mainly focuses on the transfer of ownership of a central bank asset (cryptocurrency) among participants.”

Tags
UAE Cryptocurrency Cross-border Banking Central Bank Securities News Technology Blockchain Authority
Most Popular
May 16, 2021 at 11:30
News
3 Reasons Why Payment Service Platforms Switch to Blockchain, Facilitating the Adoption of the Tech
May 16, 2021 at 10:35
News
Chainlink Rally Stalls at High of $52 as Altcoin Retraces for More Upside Momentum
May 16, 2021 at 09:29
News
Uniswap Range-bound Between $36 and $44, Attempts to Breach Recent High
May 15, 2021 at 12:40
News
Low Orbit Crypto Cannon LOCC Lottery Draft Occurs Every Hour | Stake Once to Enter All Upcoming Drafts
May 15, 2021 at 11:20
News
Dogecoin Resumes Fresh Uptrend as Buyers Recoup Above $0.40 Support
More