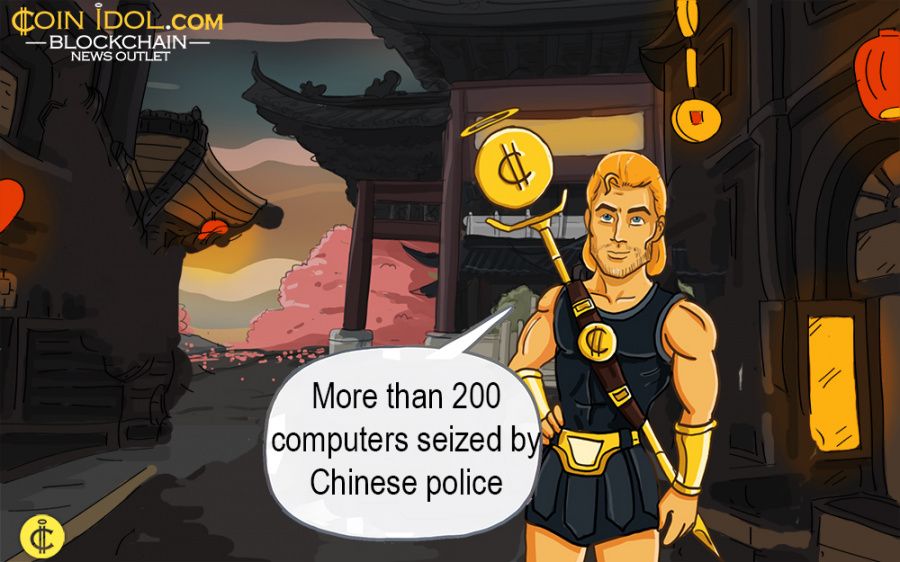 Chinese police in Anhui Province have captured over 200 computers used to mine Ethereum and Bitcoin cryptocurrencies after a man tried to defraud the electricity company to escape the bills he used to power his operation, the Xinhua news agency reported on June 22.

The police of Hansha county did investigations and discovered that the electricity meter for the suspects was short-circuited in an attempt to dodge the power costs.

Ethereum and Bitcoin are sundry versions using the technology of blockchain and their mining activities consume high power since the computers used need to be of the high-performance type.

A suspected man identified as Ma had purportedly stolen 150,000 kW hours of electricity in more than a month.

Ma told the police in Anhui province that he had purchased the computers in April but was startled to understand that his daily electricity bill was over 6,000 yuan ($924).

Police further revealed his swindle when they similarly discovered the electricity metre for the suspected cryptocurrency mining activity had been short circuited that was a likely attempt to duck the electricity bill.

China was a hub of majority cryptocurrency mining activities before Beijing in 2017 to deject it as part of a huge crackdown on cryptocurrencies such as bitcoin.

It is not yet well known how much of mining operation has been closed or moved offshore.

The government of China has strengthened regulations and measures over bitcoin plus all other digital Cryptos to curb financial risks by closing exchange platforms and stopping the trading of Cryptos until the proper solution is found.

In April this year,  the police of Tianjin expropriated 600 mining computers in an identical case.

Tags
Police Cryptocurrency Electricity Bitcoin Power Ethereum Companies June News Mining
Most Popular
May 04, 2021 at 09:24
PR
Peer-to-Peer Internet ThreeFold Goes Multichain to Accelerate Token Accessibility
May 03, 2021 at 15:03
News
China Eyes February 2022 Beijing Olympics for Digital Yuan Launch but Is It Still Viable Amidst COVD-19 and Rising anti-China Movements?
May 03, 2021 at 14:17
News
Ethereum Rallies Above $3,000, Breaches More Resistance Levels
May 03, 2021 at 13:00
PR
Everything You Want to Know about Stellar, and Why it’s Getting Added to 1xBit
May 03, 2021 at 12:17
News
Bitcoin Reclaims $58,000 Support as Bulls and Bears Resume Price Tussle
More