Computers and Blockchain: The Friend Internet OS Takes it to a Whole New Level 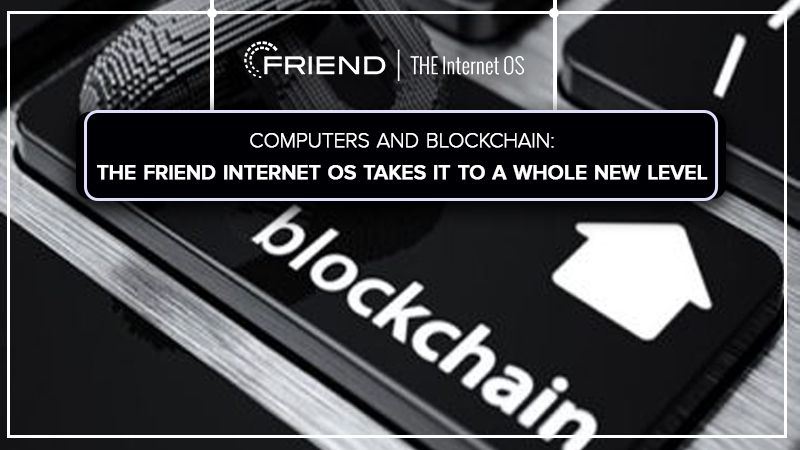 Since the invention of computers, other technologies have cropped from it to improve human life. But computers are just computers.

The internet has changed the world to such a scale that it is hard to comprehend the extent the human mind can stretch. To many, it seems like very old technology. Yet that is far from the truth. The internet was discovered in the 90s, a time when computers were already becoming commonly used.The early onset of “the next generation internet” had it’s early start in 2008 – blockchain. Blockchain technology is today seen as “the internet of the future” because it provides freedom for internet users. It is a decentralized system in which transactions are confirmed and stored on a public ledger.

Blockchain has brought something better in monetary transactions and other services. Traditionally, there must be a third party that ensures consensus for transactions to be approved. This means those who are doing any form of online transactions involving money rely fully on third parties.

With blockchain, there is no need for a third party. It is a technology based on freedom, security, and anonymity.

How does The Friend Internet OS Come in?

We have seen the importance of computers in the world, and everyone knows this. We are living in the digital and information era in which everything is dependent on information.

The internet provides the information through computers and related services. Blockchain technology is an improvement of the normal internet.

There are however so many issues involving the use of computer and internet. One of the biggest issues is the security of user data.

In most cases, the users’ data is store by ISP other related bodies. This means you are not in control of your data which can be sold to the highest bidder.

According to The Friend Network, everyone should have control of their personal data. They should access the data from anywhere.

You should be able to decide the programs you can use and the power you have. Not the device you access your desktop to dictate this as it is the current case. The Friend OS focuses on bringing in the true meaning of freedom, Intelligence, empowerment, privacy, and integration.

In other words, it brings the functionality and operations of blockchain into computer use. It uses the five pillars of a friend above to improve communication between friends.

What Does This Mean for Computer Users?

At the moment, you cannot communicate directly with your friends unless you connect through proprietors. Services such as Skype and Facebook messenger are the most common proprietary service today.

Using The Friend Platform means you can connect directly without these services. You can own your data and be able to exist and operate in the digital realm without necessarily having to choose between corporate ecosystems.

The Friend Platform is a next-generation communication solution. Being a new computer built in the blockchain era, the benefits it offers are quite immense. It can be accessed through any computer and or mobile devices.