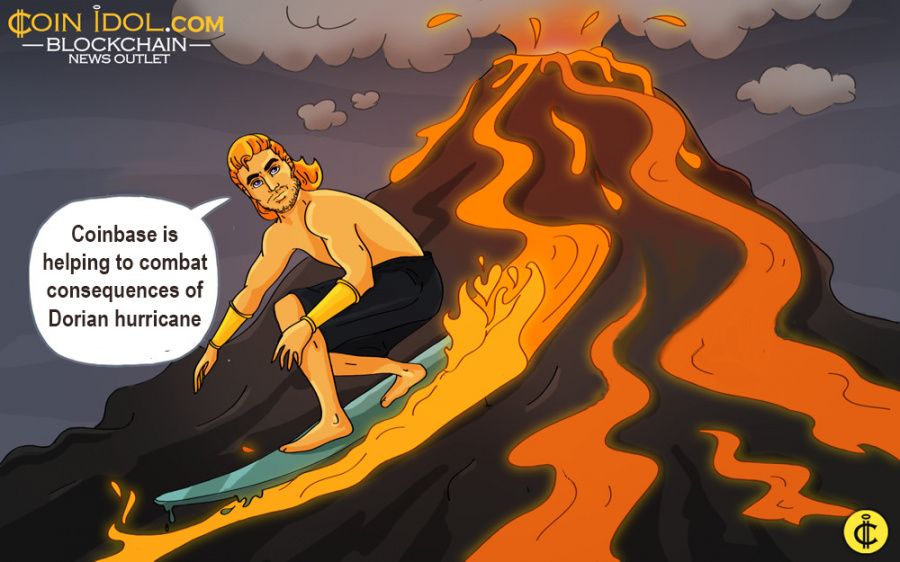 The American cryptocurrency exchange Coinbase together with Bitcoin (BTC), the world’s leading digital asset by market cap, are helping the Hurricane Dorian effort. The hurricane that happened on August 24, caused catastrophic damage to Grand Bahama and Abaco Island, with at least 70,000 people left homeless and also brought a loss of about $7 billion to the nation.

The campaign that has bounded Hurricane Dorian has been amazing and appreciations to the aid of cryptocurrencies including BTC, the situation appears to be improving for the time ahead of the Bahamas.

The implausible friend has tried to assist the respite and relief endeavor for the hurricane through the charity Left a Hand Bahamas. Appertaining to the Republic, the institution has created an account on a private cryptocurrency exchange based in California Coinbase Commerce in the wake of Dorian’s damage.

The American digital asset payment service has gone ahead to commend the charity institution via a tweet:

Besides using Coinbase, all concerned citizens and other interested parties will use this channel to make their cryptocurrency donations to support the effort in the affected country via another digital asset exchange BitPay.

As per the charity institution, these Bitcoin donations will strictly be used to support various educational activities.

It seems Bitcoin donations are highly gaining traction globally. Different cryptocurrencies are being used for a multitude of total of charitable causes. For instance, during the time when the Cathedral of Notre-Dame de Paris, France caught fire, massive instant donations originated from people living in all corners of the world.

More than a few efforts to collect Bitcoin and other virtual asset donations were raised to cover the costs of reconstructing the paradigmatic monument. Last year, a famous Greek actor, Argyris Xafis, also collected cryptocurrency donations to support victims of a fire in Athens.