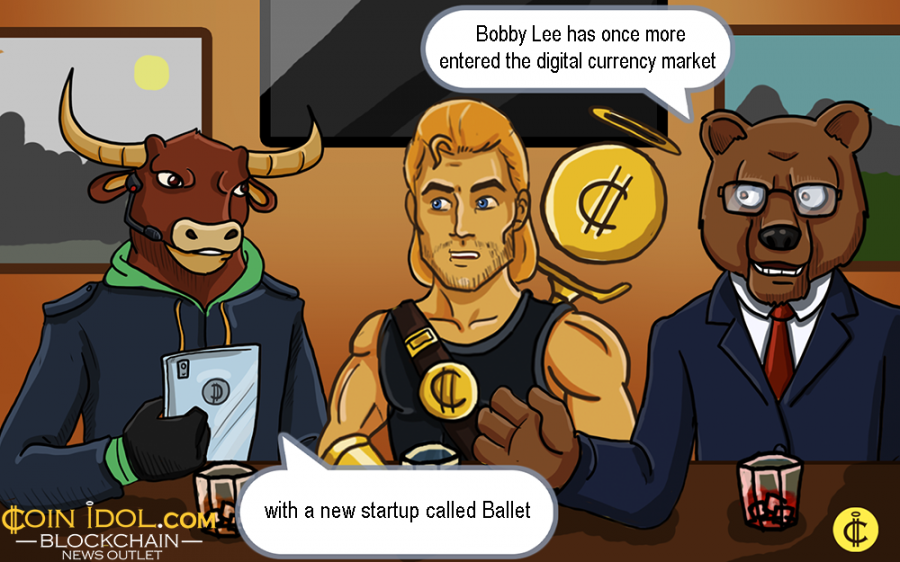 The creator of China’s first Bitcoin (BTC) and cryptocurrency exchange Bobby Lee, has once more entered the lucrative blockchain and digital currency market with a fresh startup called Ballet, which develops bitcoin wallets.

Before Ballet, Bobby established and operated BTCC, the first Bitcoin exchange platform in China. The platform expanded swiftly but later involuntary stopped functioning in the country when the Beijing government put a blanket ban on all cryptoasset exchanges back in 2017.

Bobby then sold BTCChina for an unnamed amount of money early last year. He however revealed that the exchange was vended at good price - for eight figures. Lee further revealed he was motivated to come back in the cryptoasset market after seeing another great opportunity in the market.

The price of BTC/USD hit and surpassed at $20K during the period Bobby was selling BTCC. Albeit, the coin has since dropped, taking the rest of the digital currency market. The original cryptoasset has traded above the $10K level since July, 2019.

Investors got discouraged or black despondency after the big surge to $20,000 in 2017 and the plunge to about $3,700, plus the protracted bear market of last year. He is optimistic that sitting on his BTC investment will help surpass $20 thousand and go to $50K even $200 thousand in the near future.

Now, according to the announcement, the Ballet’s new innovative credit card-sized wallets will enable regular users access to Bitcoin and other supported cryptocurrencies and unlike other popular hot wallets is offline, thus can’t be hacked. The wallet will work as a storage for the private key which Bitcoin and cryptoasset holders have to use to open their own online wallets.

Tags
Market Exchange Cryptocurrency BTCC Digital currency Blockchain Startup Price Bitcoin
Most Popular
Sep 23, 2021 at 13:10
News
El Salvadorans Embrace Bitcoin Despite Problems with the National Wallet
Sep 23, 2021 at 12:16
News
The Central Bank of Ukraine to Pay Salaries in Digital Hryvnia by the End of 2021
Sep 23, 2021 at 10:48
News
Binance Coin is in a Brief Uptrend, Faces Strong Rejection at the $385 Resistance
Sep 23, 2021 at 09:48
News
Bitcoin Struggles to Sustain Above $44,000 as It Reaches Overbought Region
Sep 22, 2021 at 12:12
News
Banks in EMEA Miss Out the Potential of Blockchain, with Only 19% Benefiting from the Technology
More