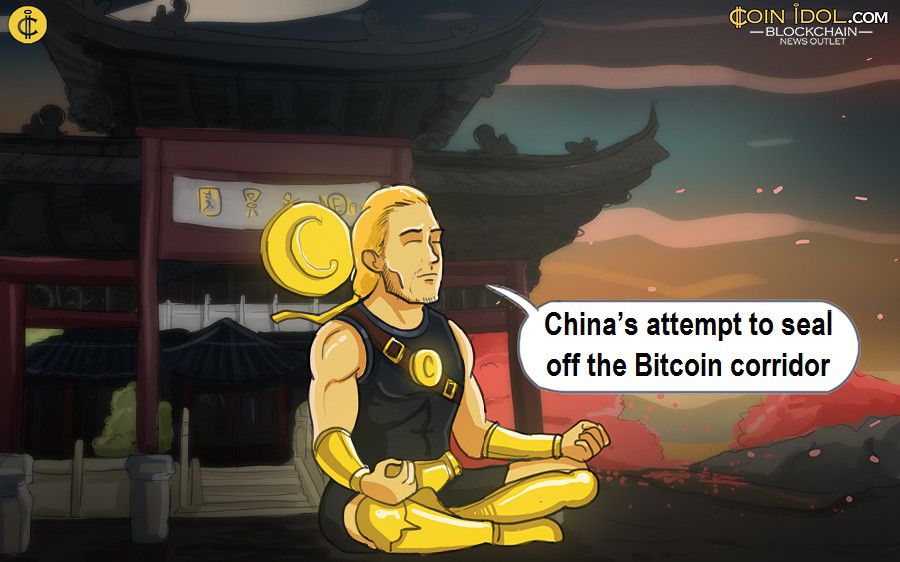 China is struggling with containing capital flight out of the economy. Due to economic uncertainty, most Chinese investors feel safer investing abroad than in China. The most recent attempt to control capital flight in China has been an attempt to seal off the Bitcoin corridor.

Every country becomes a skeptic if its citizens transfer their wealth to other countries in large volume. The Chinese government is struggling with a grave problem of that caliber. People transfer wealth to another country when they are not sure of the political or economic future of their home country.

What is the amount Bitcoin contributes to the massive capital outflow from China?

There are very many options people have when deciding to move bulky sums of money across the border today. Bitcoin seems to one of the best, in terms of anonymity and security of funds. Coinidol.com News Outlet spoke to Vishal Gupta, CEO at SearchTrade, a Bitcoin & Blockchain-Based Venture that pays bitcoin to users for using their site to search the internet, about the specific contribution of Bitcoin to Chinese capital outflow. And he responded in a statement saying:

“Bitcoin is a victim of its own popularity, its contribution to capital outflow is negligible. On the contrary, it is bringing in foreign investment in Chinese market from investors around the world setting up mining operations in the mainland. The government is not cracking down on Bitcoin in my opinion, but trying to caution Bitcoin businesses against investor fraud and suggesting to businesses to maintain customer information.The impact on BTC price will be known in weeks to come as policy becomes clearer to both businesses and investors.  There are no major drops in volumes or trade on any major Chinese exchanges as yet.”

Will cracking down on Bitcoin close down the Door on capital outflow?

Will this problem be solved just by cracking down on bitcoin in China? CoinIdol.com spoke to Oleg Khovayko, co-founder at Emercoin, a distributed blockchain service for businesses and individuals, about how a successful crackdown on Bitcoin could save the situation in China, he said:

“I think cracking [down on] bitcoin will not significantly affect capital outflow because bitcoin only accounts for less than 20% of the capital movements. Some Months ago, the price was lower than now, and there weren't any problem for money transfer. Technically, Bitcoin ignores any locality laws. How can they technologically regulate Bitcoin usage? I think technologically this is impossible. Of course, they can pursue people for disobeying laws, yes. But, I cannot imagine, how a government can block some specific transaction within the bitcoin network.”

How is this crackdown affecting Bitcoin as a currency?

Bitcoin is a currency driven by the forces of demand and supply. A crackdown means someone is trying to manually cut down on the demand for the currency. Coinidol.com spoke to Tone Vays, a blockchain consultant, researcher and blogger at LibertyLifeTrail, a cryptocurrency analytic site, to explore what this could mean for bitcoin and he commented:

“In my opinion, China is not cracking down on Bitcoin. The idea of PBOC caring so much about Bitcoin that they are setting world-implicating economic/monetary policy is just ridiculous. If they cared about Bitcoin they would shut down the centralized exchanges, raise electricity prices or just confiscate mining equipment. In fact, I wish PBOC would get a little more involved and perhaps regulate some of that unrealistic volume out of the ecosystem. What really happened was that speculative traders got over confident in $BTCUSD correlation with the minor devaluation of the Yuan and the assumption that it will devalue one more time. When the opposite happened the first week of the year, these Chinese speculators ended up on the wrong side of the trade and to make matters worse, the skyrocketing offshore borrowing rate did not allow them to double down. Some leveraged positions were sold and the rest were forced to cover/sell their leveraged bets driving the price lower than it normally would. Once the dust settles everything will be back on track for all-time highs with a few pigs getting slaughtered along the way.”