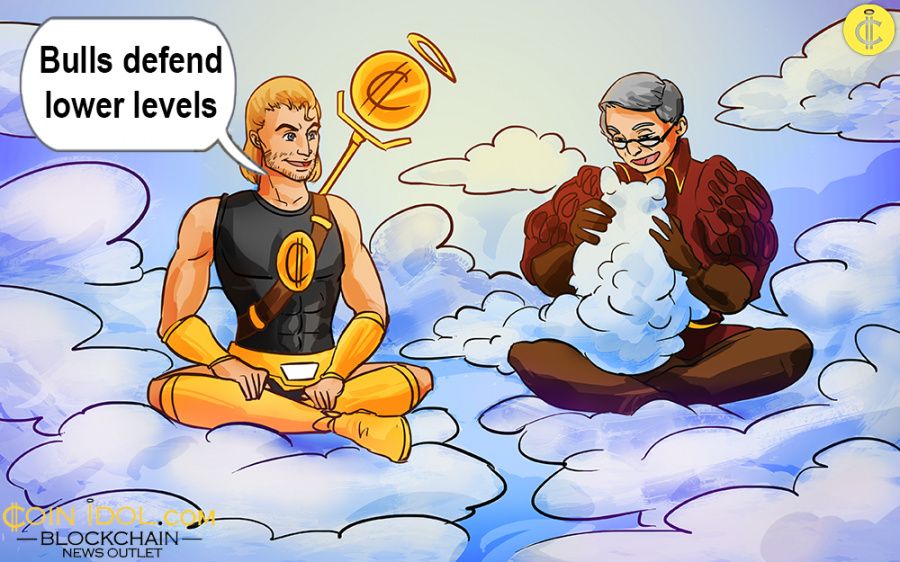 Binance Coin, EOS, Monero, and TRON are all trading in the bull market. The coins made an impressive positive move as the bearish trend lines were all broken by the respective coins, paving the way for a change in trend.

Nevertheless, more buyers are needed at the present price levels to sustain the price. However, ADA is still in a bearish trend and the coin is yet to pull through the resistance line of the horizontal channel.

Binance Coin has continued to make an impressive move to higher price levels. In less than 48 hours the coin tested the $21 resistance level. Nonetheless, if the price rises it is likely to face another resistance at the $22.

Given that, if the coin pulled through the resistance levels, BNB will attain a high of $32. Conversely, if the coin falls below the EMAs, BNB may drop. The RSI period 14 level 60 indicates that the market is rising. 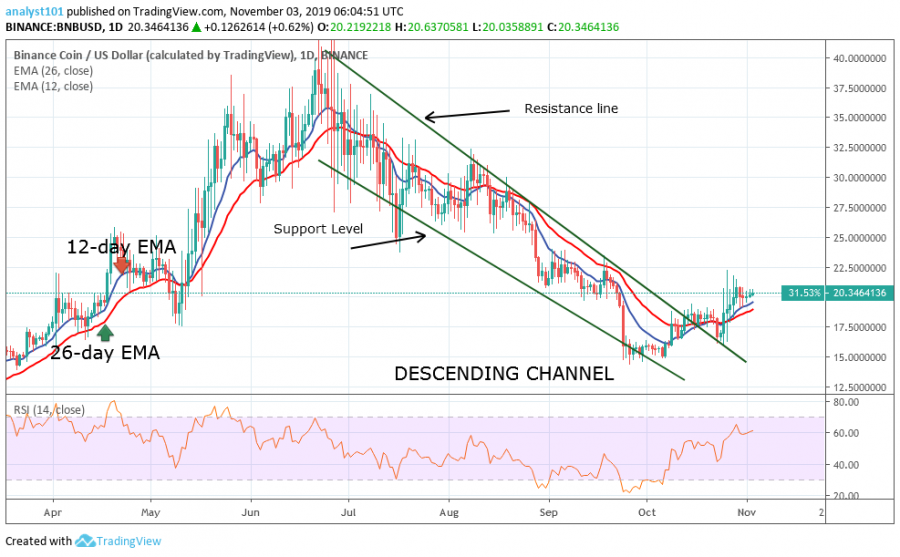 Like BNB, EOS is making an impressive movement as it broke the resistance levels. As the coin crossed through the bearish trend line it indicates a change in the trend. However, EOS is struggling at the $3.40 price level.

Every time the bulls make a positive move towards $3.40, the price will be resisted. This has been the scenario on three attempts at the resistance level. In the interim, the price is above the 60% range of the stochastic indicator meaning that the market price is rising. 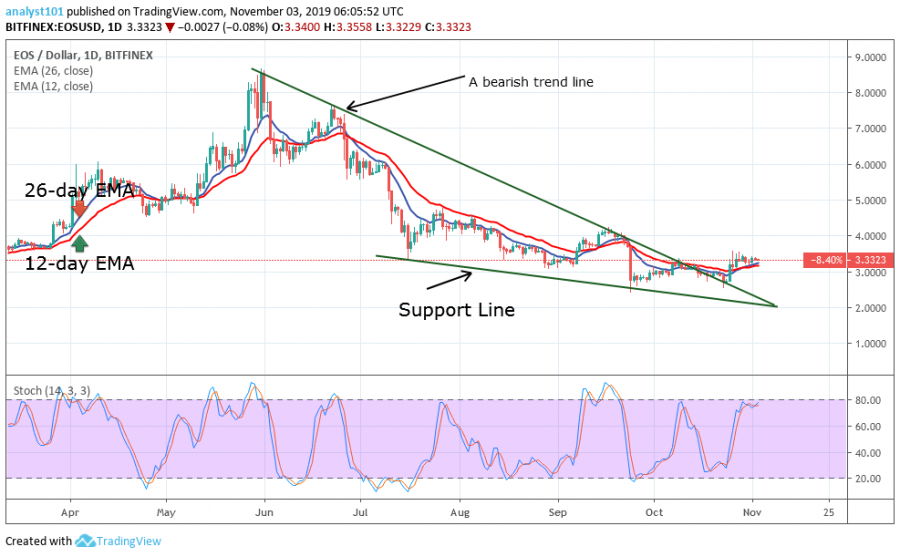 On October 31, the resistance line of the descending channel was breached and the lower highs and lower lows price formation were interrupted. Monero makes an impressive movement as the coin moves away from the downtrend zone.

Nevertheless, if the upward movement continues and price breaks the $90 price level, Monero will resume its uptrend movement. On the other hand, if the price falls again below the resistance line, the downtrend may resume. 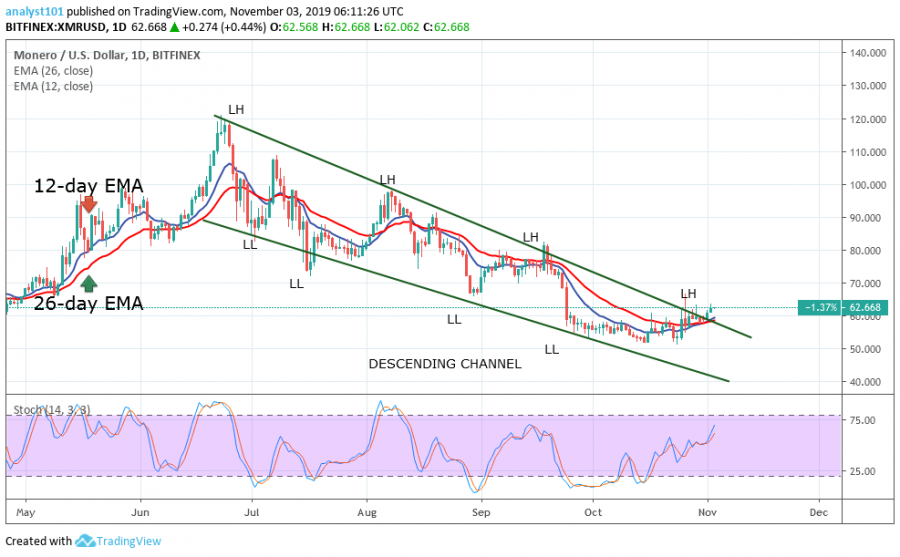 TRON is rising after crossing the bearish trend line. Recently, the coin reaches the $0.022 price level but has fallen to consolidate above the $0.019 price level. After consolidation, TRON is expected to rise. The pair is rising through the $0.022 and $0.025 price levels and will mean the resumption of uptrend movement. Presently, the price is above the EMAs which indicate that the coin is going up. The TRX/USD pair is also in the bullish trend region of the RSI period 14 level 62. 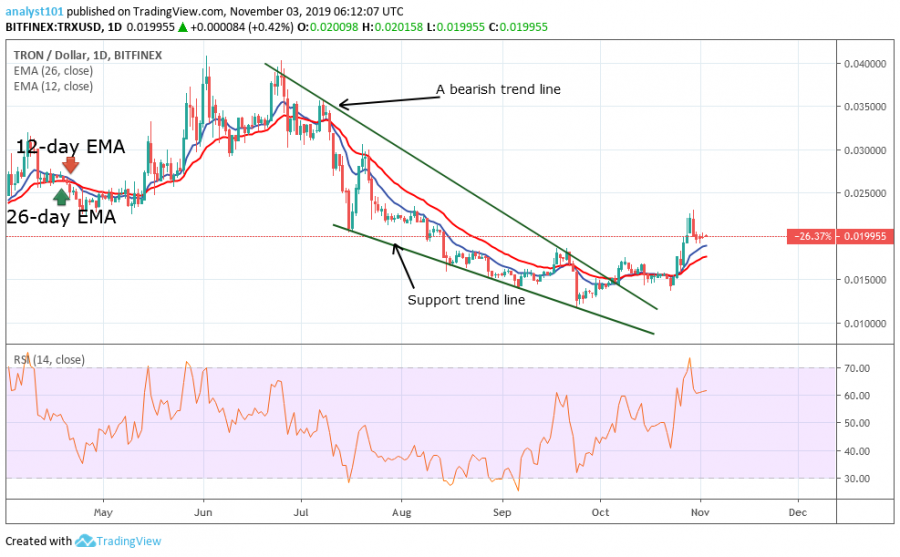 The ADA/USD pair is in a sideways move between the levels of $0.035 and $0.045. ADA has been testing the resistance line of the horizontal channel to break it without success. 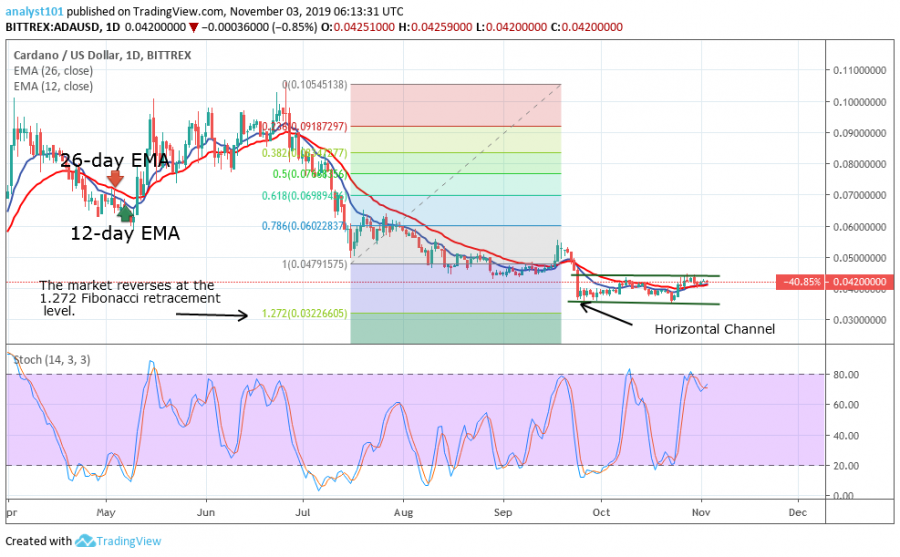 Disclaimer.  This analysis and forecast are the personal opinions of the author are not a recommendation to buy or sell cryptocurrency and should not be viewed as an endorsement by CoinIdol. Readers should do their own research before investing funds.