Bull Market On: Top 5 Altcoins that Surged Over 100% in May 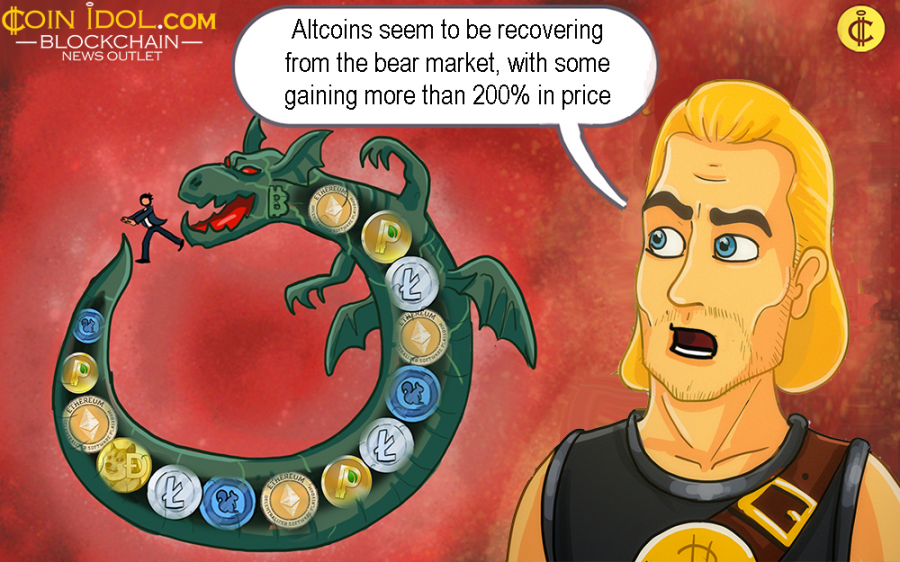 The month has started pretty excitingly with Bitcoin skyrocketing from $5,300 to $8,700, a 65% surge. Altcoins seem to be recovering from the bear market as well, with some gaining more than 200% in price. Does this mean that we are at a pivot point and a bull market has already started?

However, there are more interesting coins out of the top 100 cryptocurrencies by marketcap to look at. For example, Bitcoin SV (BSV), Solve (SOLVE), BitTorrent Token (BTT), ChainLink (LINK), and Dent (DENT) have become the largest gainers of the month, according to coincodex.com.

Top 5 Altcoins of May

Bitcoin SV has become the best performing cryptocurrency, increasing by more than 90 percent last night and 305 percent over the month. The digital currency is now changing hands at $225 and has a marketcap of $4B, according to coinmarketcap. CoinDesk considers the possible reason for such a rapid boost a fake piece of news that went viral in the Chinese media. It says that Craig Wright allegedly transferred 50,000 BTC from one of Satoshi Nakamoto’s wallets to the Binance exchange to prove that he is the real creator of Bitcoin. It worth to remind, that Binance delisted Bitcoin SV last month because of Wright’s claims to be Satoshi Nakamoto. 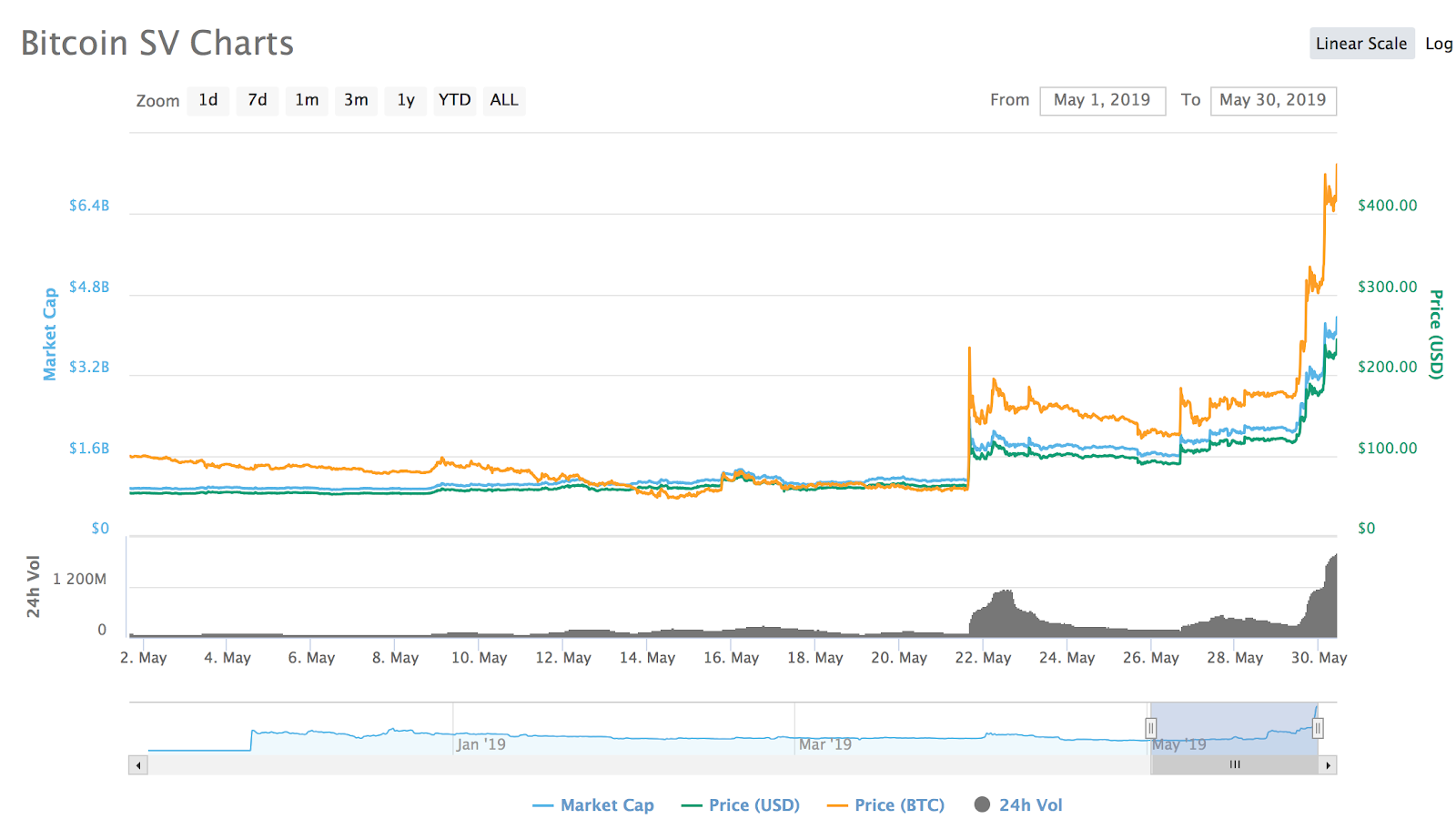 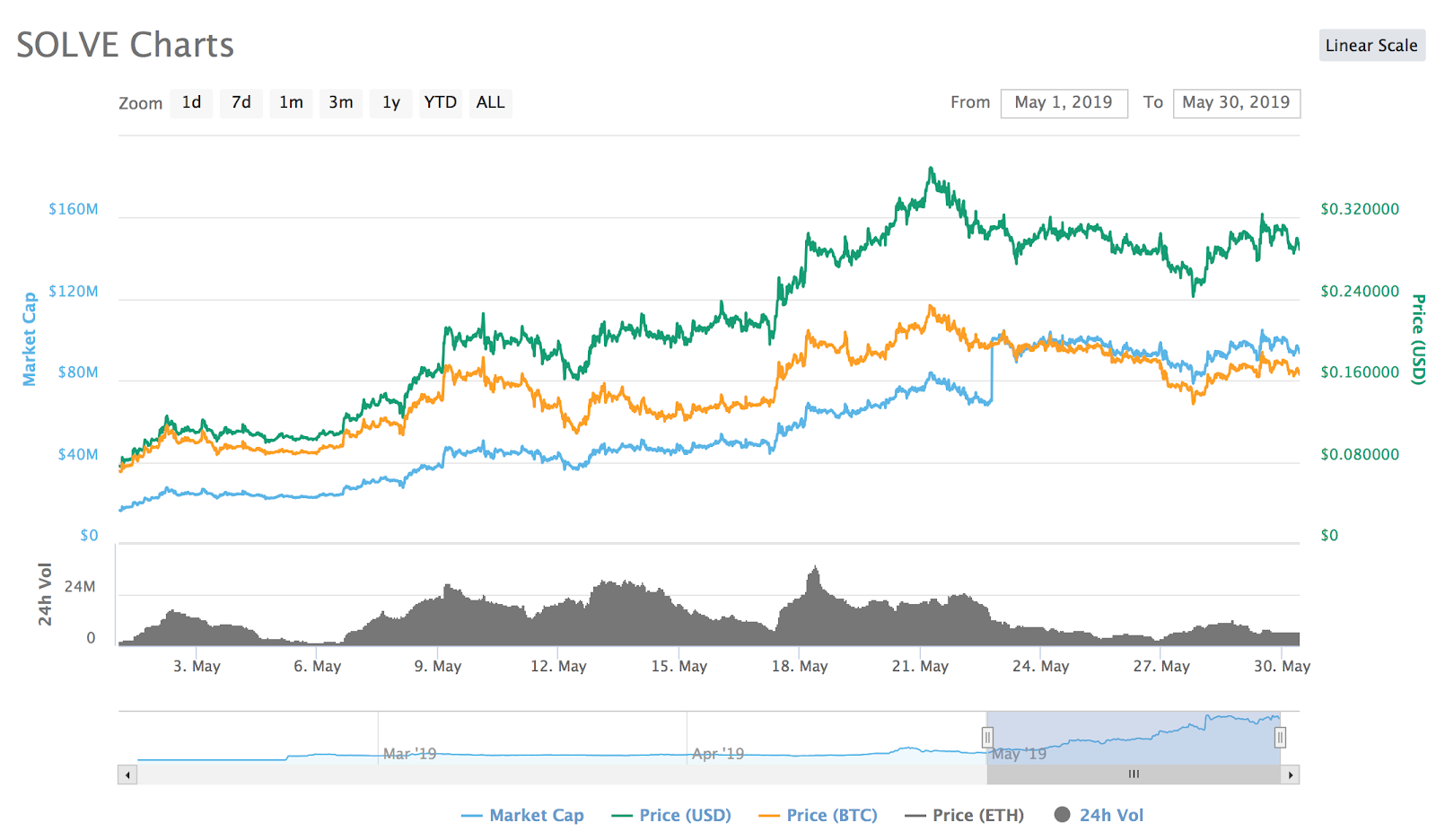 BitTorrent Token has increased by 164% during a month. The marketcap of the coin sits at $361M and its value has risen from $0.000633 to $0.001619 in May. The token seems only to rise in the future following the successful integration of the BTT wallet and token on uTorrent, a popular file-sharing client. 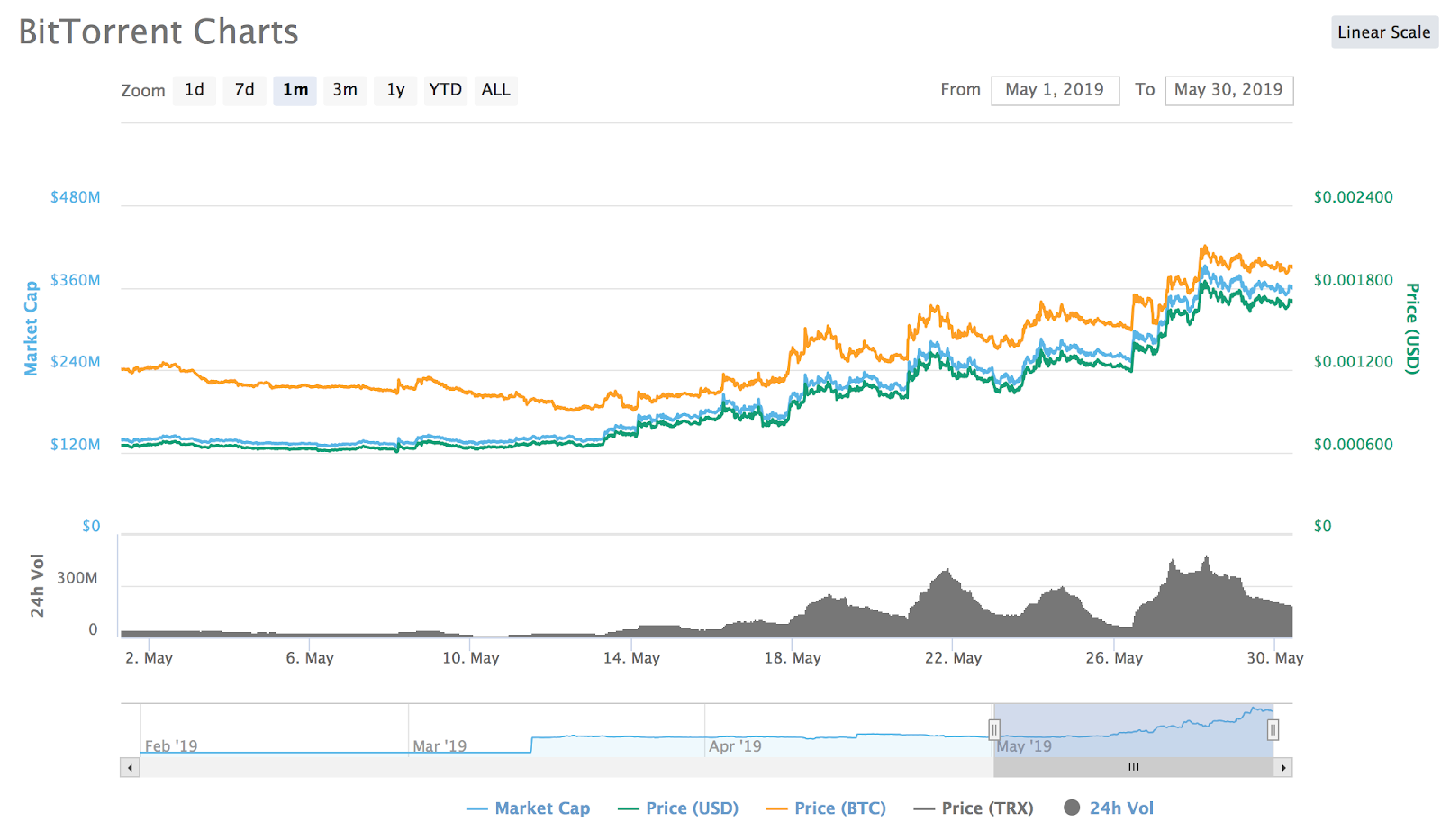 ChainLink is trading at $1.14 at the moment of writing, having gained 156% this month. The cryptocoin has a total market capitalization of $399M and approximately $32M worth of LINK was traded on exchanges in the last day. The team is preparing to launch a mainnet, thus, the end of May is a bit tense for the cryptocurrency, which is 5% down on a weekly chart. 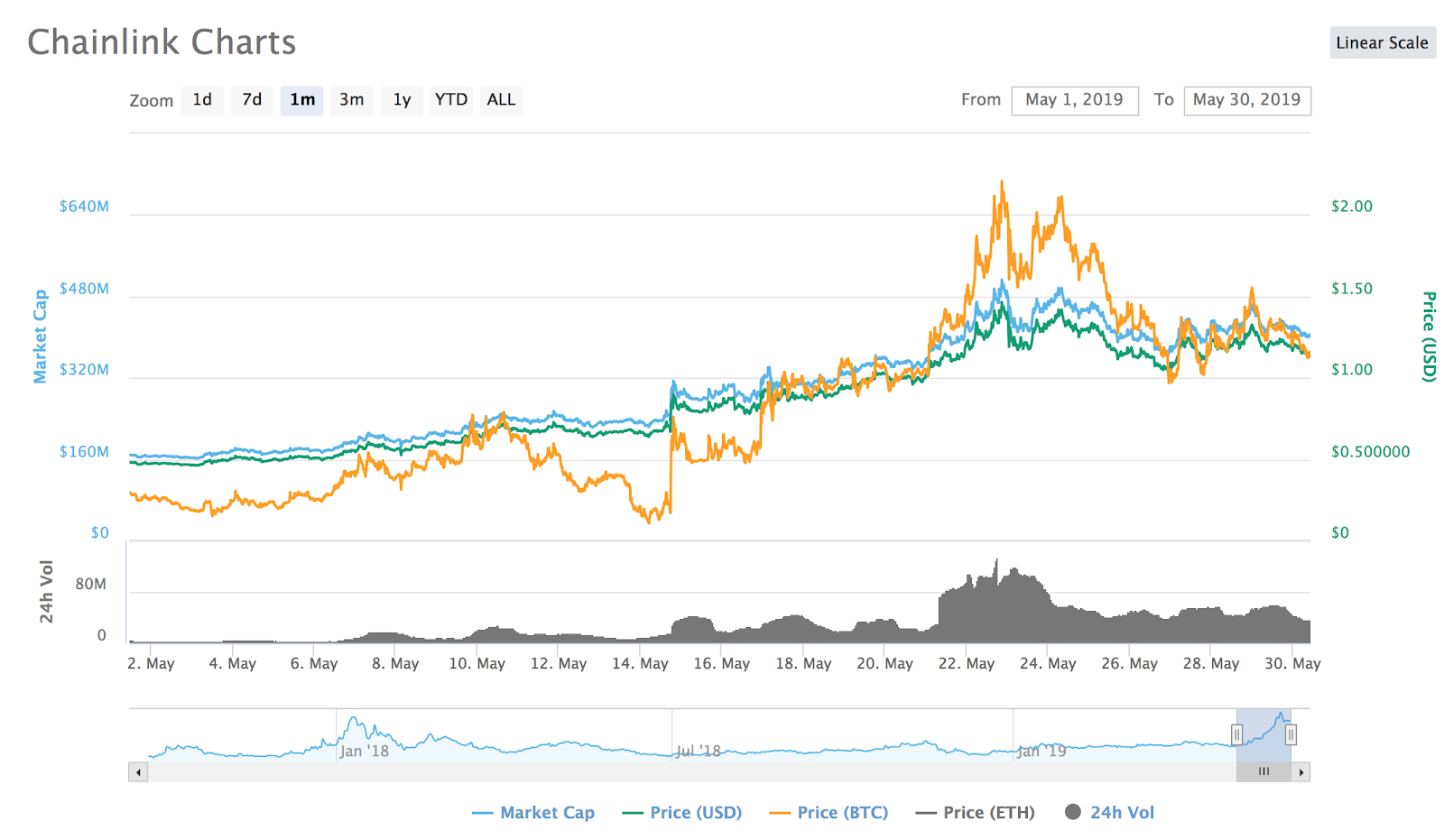 Dent is trading 11 percent higher against the US dollar during the 24h period at the moment of writing. One Dent coin is worth approximately $0.0018. It has a total market capitalization of $134M and $6.8M worth of Dent was traded on exchanges in the last 24 hours. 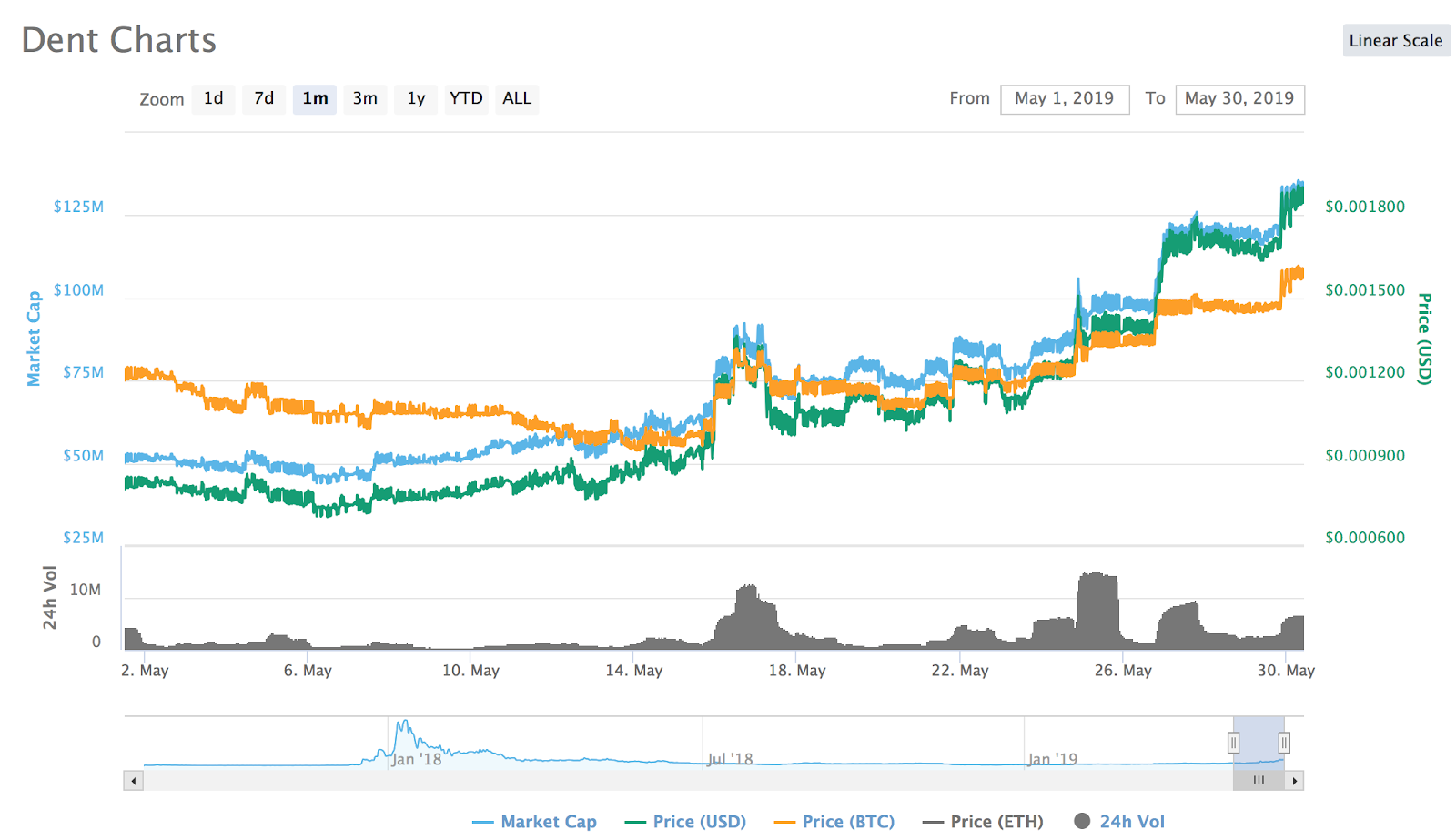 Tags
Altcoin Bitcoin Price Market Cap Trading Market Token Capitalization
Most Popular
May 18, 2022 at 11:47
Price
Bitcoin Cash Recovers above $190 after a Sudden Price Spike
May 18, 2022 at 10:50
Price
Weekly Cryptocurrency Market Analysis: Altcoins Consolidate at Recent Supports but Are Unable to Rally
May 18, 2022 at 09:49
Price
Cardano Regains Bullish Momentum but Encounters Selling at $0.59
May 17, 2022 at 13:30
Price
Litecoin Consolidates Above $63 as It May Slide to $40 Low
May 17, 2022 at 12:30
Price
Weekly Cryptocurrency Analysis: Altcoins Attempt A Recovery Rally In Anticipation Of A Bull Market
More