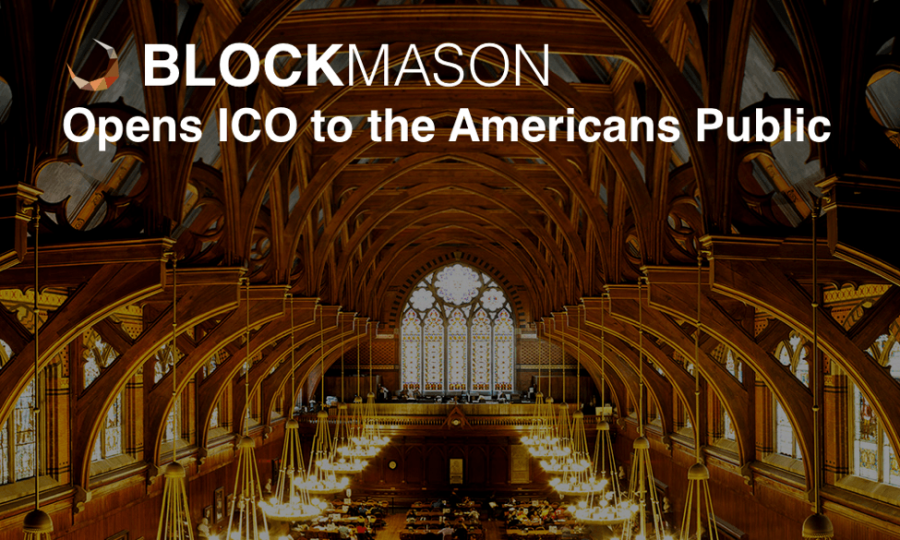 BlockMason has become the first blockchain project in the recent days to open a crowdsale for purchasers from the United States.

August 29, 2017, Hong Kong – A leading developer of blockchain-based distributed applications, BlockMason, has announced what they believe to be the first SEC-compliant, public American ICO for their product, the Credit Protocol. The Credit Protocol democratizes credit creation though the creation, tracking, and settling of debts on the blockchain in all their forms—from consumer loans to gift cards to university meal vouchers.

BlockMason has already distinguished itself by releasing multiple working products and applications prior to the commencement of their token sale. This commitment to building functional applications pre-ICO is rare in the Ethereum community, and puts BlockMason on what they believe to be firm legal ground for making their ICO open to purchasers in the United States. In the wake of the SEC’s report on the DAO token sale, many other blockchain companies have feared taking a similar step, banning U.S. customers from participating in their ICOs.

In BlockMason’s recently published legal opinion, former Department of Justice attorney Stephen Galebach, and in consultation with a former member of the SEC, explains BlockMason’s legal standing.  According to Galebach, developers without market-ready products and services may sell only their

“concepts and future hopes,” meaning their tokens are likely subject to securities law. However, companies like BlockMason with developed products, “are able to motivate purchasers by a desire to use or consume the products and services that are offered for purchase, licensing or token-based usage.”

Galebach elaborates that it is of vital legal importance that CP Tokens (CPT) are necessary for customers to utilize the full potential of the Credit Protocol — making CPT product-use tokens and not investment tokens. These two factors indicate BlockMason’s ICO likely passes what is known as the Howey test for investment contracts.

CPT holders may use their tokens to power applications of their own development, or in applications developed by other companies. BlockMason itself has recently released their first application built atop the Credit Protocol, Friend in Debt. While the Credit Protocol is a versatile platform for developers to build any variety of credit recording application, Friend in Debt is a simple and powerful program for tracking social debts among friends. Unlike Venmo, a centralized competitor, Friend in Debt is not restricted by borders, currency, or banking, and adds the ability to keep balances outstanding in addition to spot settlement. Its beta version is already deployed for public vetting on the testnet for anyone with a Metamask supported browser.

Since the SEC’s report on the DAO, many other companies have claimed their ICOs are SEC compliant, yet only BlockMason has made its ICO open to the public, and not just accredited investors. The reasons for this reticence may be money, but BlockMason cofounder Jared Bowie has his own theory:

"Any company that opens an ICO, but does not offer their token for sale in the U.S. confirms their fear that their token is at risk of SEC regulation.”

About the Token Sale

BlockMason is in the process of launching their pre-ICO token sale, which will feature significant bonuses for early adopters. To learn more, or sign up for a guaranteed purchase slot during the pre-ICO period, visit https://blockmason.io/projects/ico/.

BlockMason is a world-class developer of blockchain-based technology, whose products include the Foundation Protocol, the Credit Protocol, and Friend in Debt. Their mission is enriching the dapp ecosystem with secure and functional apps that are both immediately usable and possess the capacity to fundamentally transform our daily lives.

BlockMason is the source of this content. This press release is for informational purposes only and should not be viewed as an endorsement by CoinIdol. We take no responsibility and give no guarantees, warranties or representations, implied or otherwise, for the content or accuracy.  Readers should do their own research before investing funds in any company.