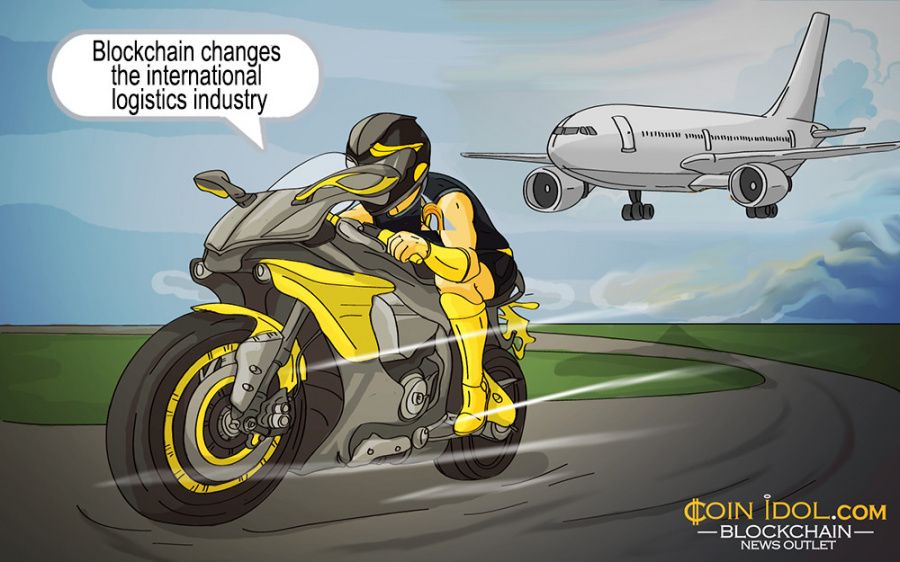 When blockchain technology turned from a geeky thing into a buzzword for major businesses a few years ago, it was only a matter of time before it expanded far beyond finance into other industries. Its advantages, like tamper-proof design, utter accountability and unparalleled transparency, have drawn attention from stakeholders of very diverse business areas.

Logistics was among the first to appreciate blockchain’s appeal as it may seem a fairly perfect match for the industry. All the issues present in international transportation can be easily tackled by introducing blockchain solutions to its outdated infrastructure.

First introduced as a distributed ledger underlying Bitcoin, the world’s first cryptocurrency, a blockchain is a secure and transparent way of sharing information between trustless parties. To do so, it employs a vast, distributed network of computers that maintain a ledger of records that cannot be tampered with.

Soon, it became clear that the international transportation industry could make use of the technology, as, similar to cryptocurrencies, it deals with enormous arrays of data and numerous complicated transactions that involve red tape, paperwork, vehicle tracking, and warehousing issues, amongst others.

This mountain of data is currently handled in the old-fashioned, centralized way, and requires unreasonable staff overage. With lots of different locations in different jurisdictions, handling a single supply chain for a single product could pose a nightmare for a rookie, and a serious pain in the neck for even a seasoned logistics expert.

With smuggling and other illicit activities not going anywhere, the issue of compliance with the law and ensuring that nothing illegal is going on during a prolonged journey is also a troublemaker.

No wonder then, that some players in the transportation industry see blockchain as a heavensend, an out-of-the-blue panacea that could almost miraculously solve all those problems, and, on top of that, seriously cut expenses involved in maintaining a vast network of warehouses and constantly moving vehicles alongside eliminating the burden of excessive paperwork.

Blockchain is capable of recording every movement of a truck, moves all intermediaries away and dramatically simplifies the document flow. This all comes with the renowned security and auditability of the technology that makes any attempts to pull an illegal act virtually impossible.

The resulting ecosystem costs much less to operate, provides much more security and reliability, and, thanks to removing unnecessary elements, straightens the entire supply chain.

This appeal couldn’t have gone unnoticed by nation states and companies, so there are a few blockchain-based solutions for logistics developed today that attempt to fulfill the technology’s tempting promise to the industry.

Like any big endeavor, it all started with experiments.

In late 2016, R3 members Wells Fargo and the Commonwealth Bank of Australia tested blockchain in running a global transaction on smart contracts in order to ship cotton from the U.S. to China. However, the process was put to a halt once the goods were successfully delivered, and the involved entities announced that they were generally happy with the outcome, but were not quite ready to embrace the technology completely.

This experiment continued in the Netherlands, where the Port of Rotterdam cooperated with a dozen local entities and educational facilities to operate a somewhat similar project, which, however, is set to last for two years unlike the short-living experiment by Wells Fargo and the Commonwealth Bank.

A couple of major international companies have used Hyperledger Fabric by IBM to test the abilities of blockchain: Denmark-based Maersk sought to increase the efficiency of its document flow and cargo management, while Walmart in the U.S. decided to trace the origins and the delivery of a pork shipment from China. It has also patented a blockchain-powered solution for delivery by drones.

Blockchain has interested other major players in the field, like Amazon and Alibaba, yet there is little news concerning any particular moves by those companies in this direction. Altogether, most projects that attempt to employ blockchain in logistics use corporate funds, and therefore remain mostly centralized.

There are, however, two logistics-related projects that opted to raise funds in the more innovative way of token sales, namely A2B Direct and Blockfreight.

A2B Direct is a platform currently operating in Eastern Europe, where it is unofficially known as a ‘freight Uber.’ It runs a working platform for freight forwarding that does work in a somewhat similar fashion to Uber: it allows for tracking deliveries and staying in touch with the driver, and takes care of the paperwork. However, the company opted to integrate blockchain into the platform in order to enhance its capabilities and reduce costs even further.

In its crowdsale, yet to be held, the company seeks to raise €500 thousand to €3 million for expansion into Western European and North American markets. The extent of this eventual expansion mostly relies on the amount of finance that the company manages to attract.

Blockfreight, on the other hand, is founded by the industry’s seasoned experts, and uses Ethereum-based smart contracts and a tradeable token for all transactions within the network in order to tackle the issues of fraud and smuggling, and efficiently track shipments.

As opposed to A2B, the project is still under development, and there are several investment rounds planned for the company’s token sale campaign that seeks to raise $1.9 million.

The challenges faced by the existing international transportation and logistics agents are very serious. With the industry being one of the most important elements of common welfare, its needs require very serious consideration and should be addressed.

Blockchain technology, on the other hand, offers solutions for the entire industry and is widely regarded as the up-and-coming deliverance from most of the problems that it experiences. However, currently it is mostly about testing the waters, and there are only a handful of projects that seek to provide comprehensive solutions.

This may relate to the fact that blockchain is a relatively new technology and has not garnered enough supporters in the corporate world and among the general public. Still, with more and more projects, companies, and even nation states getting on board with the innovations, and cryptocurrency rallies reaching the ears of more and more people, the general support for the technology is likely to grow over time, and the emergence of a universally acclaimed solution for logistics that employs blockchain might be a matter of just a few years.

Tags
Blockchain Logistics Industry Technology Finance Business Transparency Companies Transport
Most Popular
Jan 25, 2022 at 12:24
Price
Litecoin Declines as Price Deepens in the Oversold Region
Jan 25, 2022 at 11:30
Price
Weekly Cryptocurrency Market Analysis: Altcoins in Oversold Regions as Buyers Regroup for a Price Rebound
Jan 25, 2022 at 10:32
Price
Ripple Fluctuates above $0.56 as Bears Threaten to Resume Selling Pressure
Jan 24, 2022 at 12:12
News
30 YouTube Channels Hacked; Is it Another Reason for Bloggers to Switch to Decentralized Streaming Platforms?
Jan 24, 2022 at 11:15
Price
Ethereum is in a Tight Consolidation, May Slide Below $2,300 Low
More