Bitfury Refuses to Sell $43 Million Worth of Bitcoin 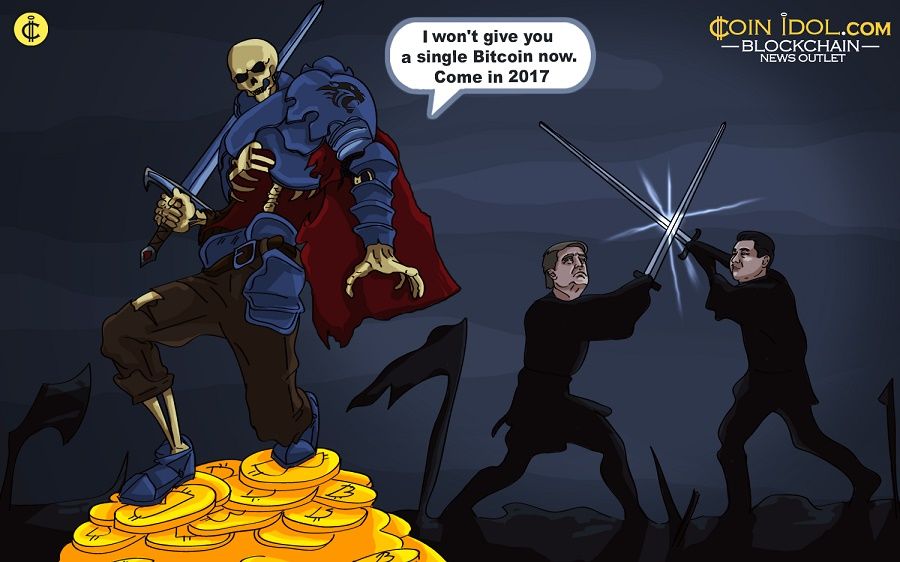 One of the largest Bitcoin mining companies, Bitfury, has turned down bids to buy bitcoin from various investors and Assets Under Management funds. This is seen by many to have been triggered by the surge in Bitcoin’s price from $800 to $900.

Predictions of the price of bitcoins are coming true, prompting investors to look to bitcoin as an opportunity to seize some significant profits from. Recently, it was predicted that bitcoin’s price wouldn’t stay long at the $800 mark and that came true. Now, there are ongoing predictions that bitcoin will touch the $3000 mark in 2017, causing investors to buy as many bitcoins as possible. This is in anticipation that the price will increase high enough for them to make a sizeable profit.

Why are many bitcoin mining companies and exchanges limiting bitcoin sales?

Recently we have seen an increase in the number of firms refusing to sell their bitcoins or limiting the amount of bitcoin users can withdraw at any time. CoinIdol.com News Outlet spoke to Kumar Gaurav, founder and CEO at Сashaa, a peer to peer blockchain powered marketplace, about why he thinks firms are not willing to sell a large amount of bitcoins. He replied in a statement saying:

“As we all know that the Bitcoin is still volatile and compared to other commonly traded commodity as the market cap is small and many other issues. But the biggest issue which we have is that we do not have any application which can help directly the adoption of bitcoin in average consumer space. And until that does not happen bitcoin is just a commodity as a store of value, which is not sufficient for its growth.
As a bitcoin enthusiast and investor, of course, it's a makes me feel happy, and it will also help to the solve the chicken and egg problem. During early days of any technology, we think that we do not have enough motivation to develop something and in return, we never get enough user to encourage the development. If we see things from that perspective, this rise came at the correct time to get the attention of innovators and investors.
I expect 2017 as a year where Bitcoin will break the rumor and negativity made around it and will go into consumer space. Apps will launch which will help to deliver the advantage of Bitcoin and blockchain to average consumers. As an asset Bitcoin has proven many times that it rise more sharply when political and economic issues have grown, which I think will bring more institutional investors into the domain to balance their portfolio.”

What would cause this price surge in bitcoin?

The price of bitcoin is driven by demand and supply. The supply of bitcoin is rather constant with no mega mining firms coming into business of recent. The only remaining swing factor affecting price is the demand for bitcoin. CoinIdol.com spoke to Vishal Gupta, CEO at Searchtrade, a site that pays bitcoin to users for searching using their search engine, why he thinks bitcoin will hit an all-time high price in 2017. He answered that:

“Bitcoin price is determined by two primary factors growth in mining difficulty rate and number of new investors that come on board to invest in Bitcoin.This works in cycles so very difficult to predict when the surge in mining or adoption will take place. It may happen based on news or a big marketing push initiated by some btc business. Key data being we know over substantial period of time we have only seen rapid growth in both these numbers. So when Bitfury says they won't sell they believe these numbers will keep rising further. ”

How accurate can this prediction of a bitcoin price surge be?

CoinIdol.com spoke to Blake Anderson, a cryptographic economist, in private practice, about how accurate price predictions can be. He replied in a statement saying: