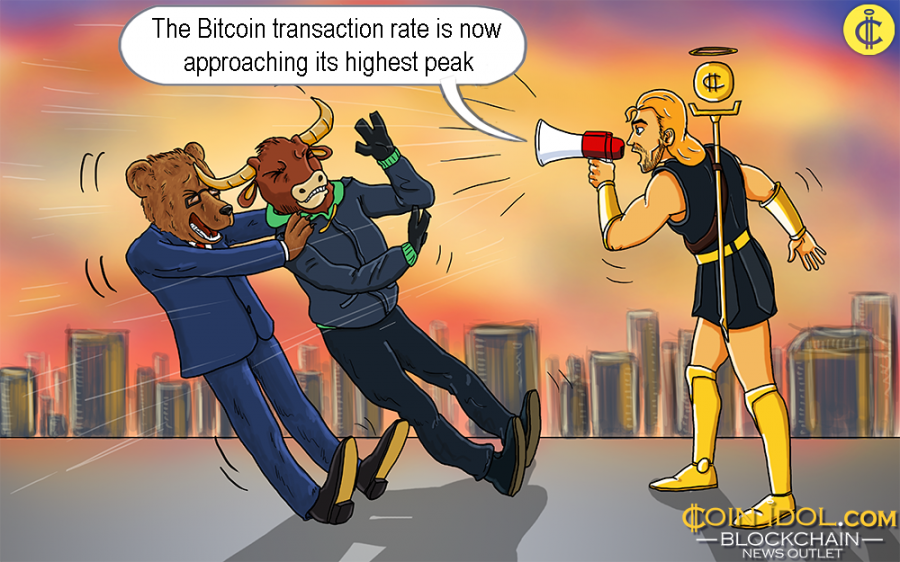 The Bitcoin (BTC) transaction rate is now approaching its highest peak since December 2017 notwithstanding the one-year long bear market. The transaction per second for Bitcoin, the flagship cryptocurrency, is gradually increasing and is also seeing a recovery in both real use, particularly in the developing markets, and BTC’s Google search trends are rising because of the latest skyrocketing rally.

Google searches for #Bitcoin have ticked up during the current rally but, unlike #crypto volumes, is nowhere near what it was during the November plunge. pic.twitter.com/s0ilALRxqU

According to Mati Greenspan, the senior market analyst at eToro, a giant social trading platform, cryptocurrency trading volumes have begun to surge, nevertheless both trading activity and online searches specifically about digital currencies such as Ethereum, Ripple, Litecoin and others are ‘nowhere near’ what they were when cryptocurrency prices registered record-level highs in the month of Dec 2017.

Google searches for #Bitcoin have ticked up during the current rally but, unlike #crypto volumes, is nowhere near what it was during the November plunge. pic.twitter.com/s0ilALRxqU


Greenspan indicated that ‘volumes across’ cryptocurrency exchanges since December last year are at their ‘peak levels’ since April last year. In addition, the BTC usage is very high and is close to #.87 TPS (transaction per second) - the highest point ever recorded, Greenspan revealed.

He further indicated that Bitcoin usage rates were increasing progressively throughout the bear market as BTC adoption continued to grow even when the cryptocurrency prices were down noticeably from their all-time highs.

Bitcoin usage is especially high in emerging markets where the local economy is less stable.

Here we can see the P2P trading volumes across the world on the popular site @LocalBitcoins.

There was a noticeable dip during the bear market but the numbers have been rising lately. pic.twitter.com/yBZwIgOB1p


Some nations facing the problem of hyperinflation like Venezuela have seen Bitcoin trading volumes hike to unsurpassed highs. The citizens of Venezuela are largely adopting BTC to preserve their wealth since Bolivar is now down and worthless because of thrilling inflation.

Currently, millennials seem to be very optimistic with cryptocurrencies in place of purchasing traditional stocks, according to the Feb 19, 2019 eToro survey. More than 70% of the young investors who participated in the survey revealed they would love to invest in cryptocurrency if it was provided by traditional banks.

More than 90% of the millennial digital currency traders responding to the survey revealed that:

“They would invest more money in cryptocurrency if they were offered by traditional banks such as TD Ameritrade, Fidelity, or Charles Schwab.”