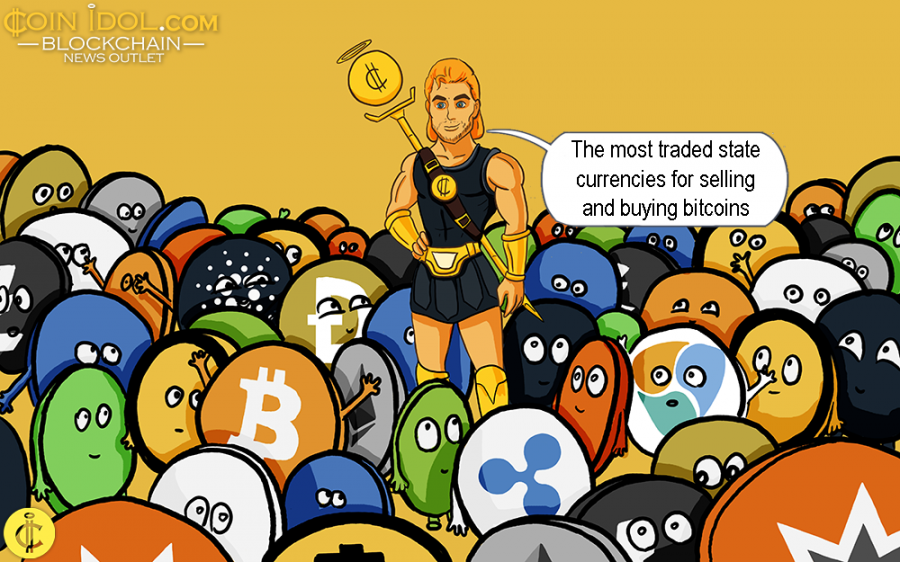 Coinhills, a platform that offers real-time prices and indexes of cryptocurrencies based on Bitcoin (BTC) through a user-friendly interface, has published the names of the most traded state currencies for selling and buying bitcoins basing on the data from various currencies, markets and digital asset exchanges listed on the platform.

The data is available and accessible on the portal from mid-February last year, based on over 125 digital asset exchanges and over 11,600 markets listed on the platform.

After the Japanese yen, the American dollar comes in as the second most used traditional currency in Bitcoin trading activities, with over 25% of the entire market share. In the year 2014, the greenback was in the first position but it was later surpassed by the Chinese yuan in the same year due to the increased BTC trading in China at the time, before Japan outcompeting both China and the United States. However, the USD has maintained its position among the leading traditional currencies for dealing bitcoins.

The Euro is mostly used in Europe, but when it comes to Bitcoin trading, it is being used globally. The Euro is currently in the 4th position on the Coinhills’ list, with over 5.4% of the market share in BTC trading. Recently, the European Central Bank indicated that it has no single plan to control and regulate the operations of blockchain and digital currencies and this will probably trigger the growth of Bitcoin value.

Berlin, in Germany, is now the leading trading place of Bitcoin in Europe, with The Netherlands and Belgium registering a significant increase in the use of Bitcoin ATMs since 2018. France plans to regulate the use of digital currency by next year.

Since February last year, the South Korean won has been ranked the 3rd most used fiat currency in Bitcoin trading with over 6% of the market share. However, the KRW share in BTC dealing experienced a plunge earlier 2018 since the Korean financial watchdogs declared a total ban on all digital currency traders operating within the country from using unknown bank accounts – all the bank accounts belonging to the exchange have been declared to the authorities for proper monitoring and evaluation.

Since Korea is also friendly to innovations, the country intends not to ban the Bitcoin activities since they know that cryptocurrency won’t threaten the national fiat currency. Also, the cryptocurrency community in Korea, is expecting improved regulations concerning blockchain, Bitcoin dealing and investment, in the near future.

As we talk now, the Japanese yen is topping all traditional currencies with around 60% market share, when used for trading BTC. Japan being the mother of cryptocurrency, it has been a front-runner for long and is now taking advantage of the protracted US-China trade war as well as the forced embargoes and restrictions on virtual currency exchanges by the Chinese authorities since 2017. From that particular time, the Bitcoin trading operations shifted from China to a popular BTC-friendly country Japan and many other potential traders sought refuge from Hong Kong.

In addition to that, the Japanese financial regulators realized the importance of adopting BTC and other major cryptocurrencies. The financial authorities have been active in creating strong guidelines and have quickly rationalized cryptocurrency trading and this has made the country’s fiat currency to be highly used in global digital currency market. Back in September 2017, the Japanese FSA officially   issued working licenses to more than 10 exchanges, which caused a further growth to bitcoins trading activities in yen, the Japanese fiat currency.

Turkey is doing perfect when it comes to bitcoin trading, and this is one of the reasons why its national currency is still strong on bitcoin trading activities. The existing economic tension from the US have made the turkish citizens to start adopting Bitcoin on a large scale.