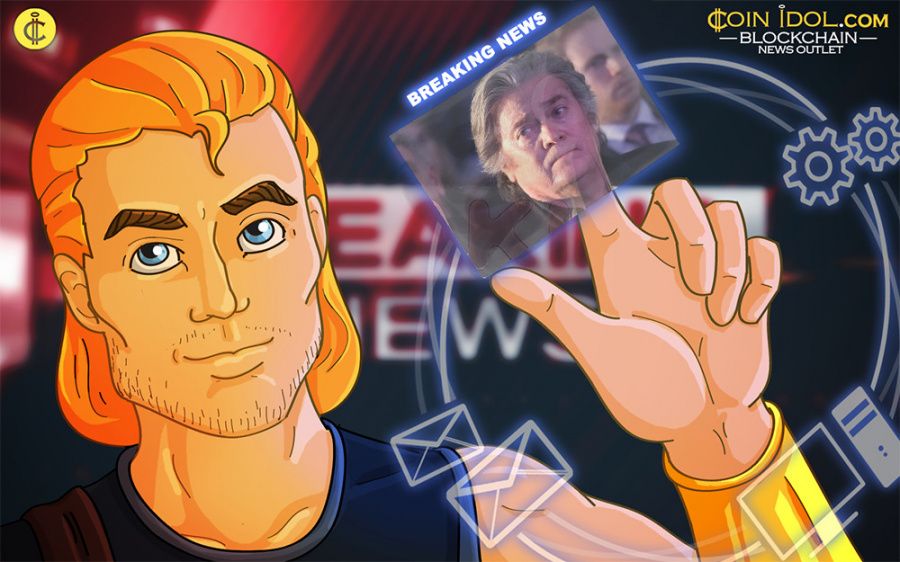 Steve Bannon has been a Bitcoin opinion leader not for many but for just one very important person – the U.S. President Donald Trump

The arrest of ex-chief White House strategist Steve Bannon has evoked the question what's going on? The political tensions in the U.S escalate and the current administration looks like a sandwich with many layers.

Steve Bannon has been the main person who's been an informal Bitcoin opinion leader for the U.S. President Donald Trump. Bannon's long trip to Bitcoin has started at the beginning of the current century and before the key cryptocurrency has appeared from the cradle. Bannon was very fond of the “game tokens” and non-material artefacts he's collected in the various computer games. After Bitcoin appeared Steve opened his eyes to a new phenomenon. Geek Steve has been introduced to big politics by Donald Trump who's propelled him to the post of his chief strategist. According to Trump, Bannon https://twitter.com/realDonaldTrump/status/1157393367619104768?s=20 who's been “one of my best pupils is still a giant Trump fan. Steve joined me after I won the primaries, but I loved working with him!”

Nice to see that one of my best pupils is still a giant Trump fan. Steve joined me after I won the primaries, but I loved working with him! pic.twitter.com/jRpmdrGYTB

Bannon is one of the huge investors into Bitcoins and his vivid mind was occupied with thoughts about the cryptocurrencies and the future of economics and politics. My communications with Bannon were distant and he's learned that the ex vice-president Joe Biden's team has started using Bitcoins as a tacit financial means to bypass the constraints of the U.S. elections code for the campaign's financing. These Bitcoins have been an instrument for converting the U.S. aid designated to Ukraine's budget in 2014 and siphoned it into undercover financial reserve funds to later boost the Biden's campaign. Joe Biden when Hillary Clinton got a blow from Donald Trump at the elections was disgruntled that he generously tapped his chance to win over Trump. Biden became obsessed with the idea to win over Trump in 2020 come hell or high water.

Bannon has informed Trump about the usage of Bitcoins by the Biden’s team in July last year and the U.S. President lashed out against cryptocurrencies that time. Bannon has started to investigate Bitcoin addresses to get key people to the light that use Bitcoins to prop the Biden's campaign and don't declare it. These activities have provoked the defamation campaign against Steve. Moreover, Biden's team has used leverage over some people in the F.B.I. to seek dirt against Bannon and finally, we see the “‘We Build the Wall” case.

Bannon pleads not guilty to fraud charges, freed on $5 million bail and…silenced. The genuine reason for the Bannon's arrest is to switch off his efforts to disclose those criminals in the Biden's camp that defraud the U.S. taxpayers when they've firstly diverted the U.S. money into Bitcoins instead of allowing them to flow into Ukraine's budget as U.S. aid, and secondly when these people use these Bitcoins to illegally finance Biden's Presidential bid.

As I know Bannon has almost finished his investigation and was ready to present the results on 21 August but all his findings taken by the F.B.I. the squad has been effectively destroyed. If anybody wants fair U.S. Presidential elections then maybe somebody will pick Steve's job and will finalize his unaccomplished mission to learn the truth. This job is also important for the Bitcoin community too since the U.S. Donald Trump is going to crack down on the cryptocurrencies business until all Bitcoins used in the U.S. politics get full KYC and AML clearance. And in this meaning, we witness now how the key figure for the Bitcoin world has been silenced.

By Vladislav Ginko, a former vice-rector of Moscow-based Jewish University. He worked as a Corporate Finance lecturer at New York-based Touro University. Currently, he is an analyst and lecturer at Russia’s leading state think-tank, Presidential Academy.