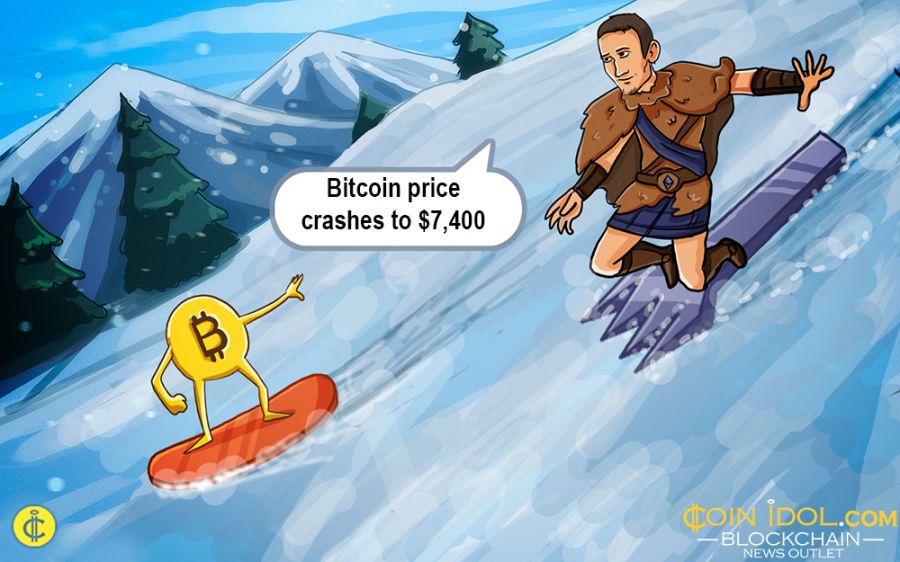 Bitcoin price plunged to a four month low of $7,400. The cryptocurrency price hovered about $7,800 after leaving $8,000 where it was a few days back. At the moment the cryptocurrency price settled at $7,500. It’s becoming realistic that Bitcoin is continuously failing to sustain itself above the $8,000 margin.

Bitcoin price sheds about 8% of it’s value just within the past 24 hours. The cryptocurrency which was trading at $8,400 plunged to at least $7,400 $1000 less than its price in the last 24 hours. However prices is indicating a Bullish trend and could recover to the $8,000 series before the end of the week.

At the beginning of this week prices steadily decline breaking through numerous supports towards the $8,000 line. The bearish move continued until the priced divided by about 9% to reach $7,800. However the price didn’t stop its downward trend until it touched the $7,400 support level.

The price reached the lowest level in months at about $7,302 and steadily improved to about the current $7,400. Meanwhile the current price is consolidated over $7,400 and is under some resistance as well. However there are still some bearish trends in the price movement between $7,450 and $7,660 according to the hourly BTC/USD charts.

What Caused this Decline in Bitcoin Price

According to analyst, there are some three most probable factors that could have led to the shrinking of Bitcoin price. The factors ranges from Bitcoin technical analysis reports to externment agents such as the development of the facebook Libra coin. Let’s dive into the possible cause of this latest Bitcoin price crash.

Since the beginning of this week, Bitcoin hard a bearish market movement is suppressed every price support levels of the cryptocurrency. For instance, Bitcoin price swung below $8,000 for more than 8 times and kept recovering. The latest price decline is because prices failed to recover after a dip of about 8%.

Data from different Bitcoin exchange revealed a number of possible reasons for the latest dump of Bitcoin price. One of the most interesting is skew.com’s data that indicates that there was an influx in the demand of Bitcoin an hour before the crash.

Just like any other commodity, cryptocurrency prices is heavily affected by information trending on the media. Especially information like Facebook CEO testifying before the US Senators regarding the development of the Libra coin cryptocurrency project. It is not the first time for Bitcoin price to drop when the US senate talks about cryptocurrencies.

This follows a recent proposal by US congresswoman Sylvia Garcia seeking all stablecoin to be classified as securities. Should this proposal pass into law, all stable coin issuers will be regulated by the Security and Exchange commission of the United states (SEC)

Cryptocurrencies are secured by mathematical equations that the current existing computing powers can not solve. However Google has injected a lot of resources into developing its quantum computing capabilities. This follows Google's recent claim that one of its computers can not perform tasks that take a supercomputer 10,000 years to execute.

This is a direct threat to bitcoin securities. Investors are worried if such computers exists, the Bitcoin network could easily be compromised. Although we are still to establish if such a computer can crack bitcoin security in a reasonable time frame, we hope the network remains immune to any external threat.