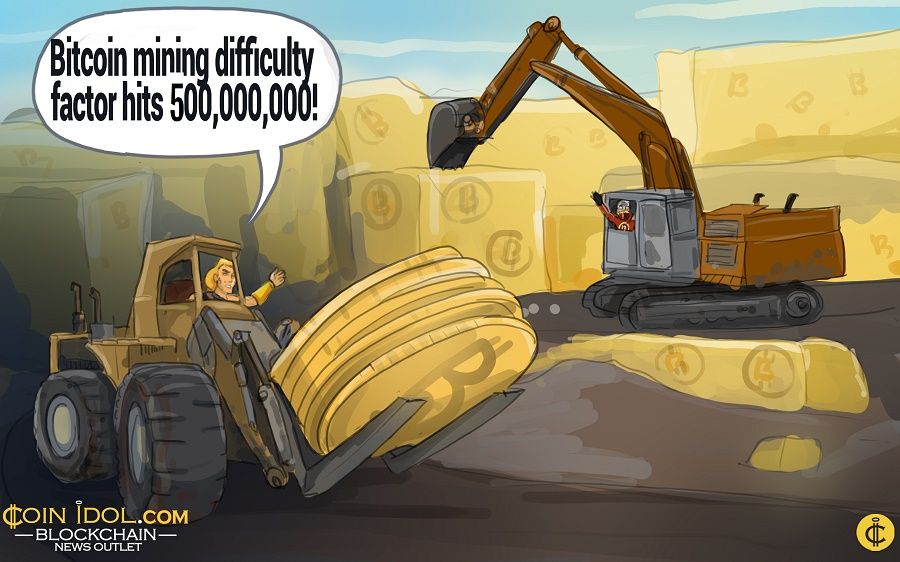 What does the increase in mining difficulty factor mean to bitcoin miners?

Mike Lorrey, a co-creator of BitGold, a predecessor of Bitcoin, and vice-president at Family Office Venture Capital commented to Coinidol.com:

"Since difficulty is not inversely proportionate to the amount of mining capacity working bitcoin, it stabilizes supply/demand on the production side, and demonstrates only that there is a higher demand for bitcoin transactions, and that miners believe there will be increased future use of bitcoin. So increased difficulty could be perceived as a sort of futures prediction of higher btc prices to come."

Coinidol.com spoke to Chris Stewart, CEO at Surebits, a blockchain based business solution firm,  about what the effects of an increase of mining difficulty factor mean for bitcoin miners and he said:

“It means that they need to expend more computing power to solve a Bitcoin block. Here is a concrete example. The ‘math problem’ that Bitcoin miners need to solve is finding a nonce such that SHA256(SHA256([block data] + nonce)) < [bitcoin mining threshold].
Since SHA256(SHA256()) is a uniform distribution — meaning that for any [block data] + nonce you are statistically just as likely to generate any value in a given set. As mining difficulty increases, the [bitcoin mining threshold] decreases. Therefore miners need to find a nonce that satisfied our equation about. However, due to the nature of a uniform distribution, this is statistically harder to be able to find.”

What are the best computers, strategies or mining pools for achieving higher profits in bitcoin mining?

Specific mining computers have recently become an important if not the most important requirement in Bitcoin mining. Different manufactures have sprout out to build these on demand machines.

Coinidol.com spoke to Oluchukwu Christian an elite software programer and educator, about the best mining ASICS, strategies and mining pools for achieving higher profits in bitcoin mining, and he said:

“Theoretically, you could use your computer's CPU to mine for bitcoins, but in practice, this is so slow by today's standards that there isn't any point. You can enhance your bitcoin hash rate by adding graphics hardware to your desktop computer. Graphics cards feature graphical processing units (GPUs). I suggest Antminer s9 bitcoin miner. The most advanced and most efficient Bitcoin miner today. If you’re serious about Bitcoin mining this is your rig. But since this miner just came out it’s possible that Bitcoin mining difficulty will now increase even more. At the current difficulty this miner can mine around 0.5 Bitcoins every month which makes it seem pretty profitable. However we did not take into account the electricity costs, pool fees and hardware cost. Not to mention the fact the difficulty can rise and the Bitcoin price can drop.
It seems that even though this is the toughest miner out there, there’s only a small amount of time until it too will become outdated. Until that happens though, it looks like a pretty reliable piece of equipment.”