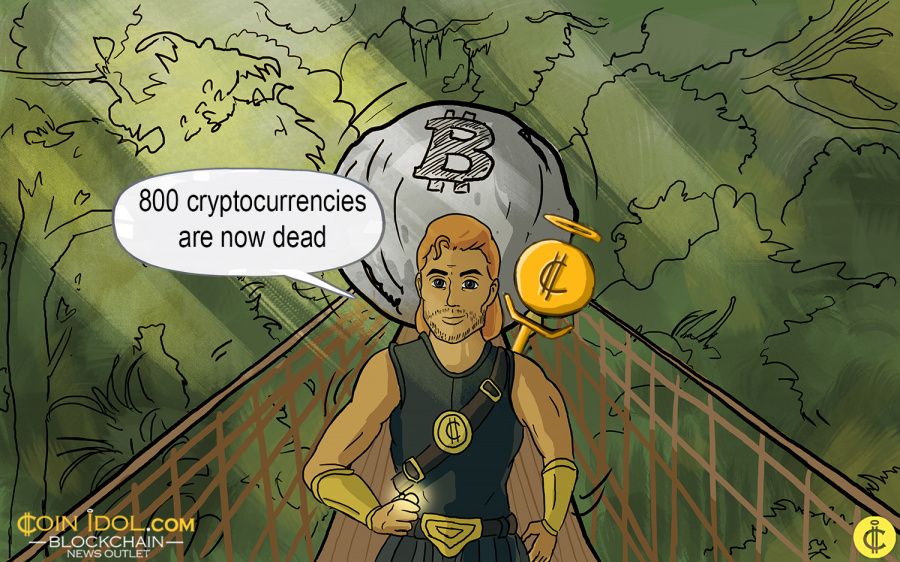 The bitcoin bubble at the end of last year saw a majority of new cryptocurrencies penetrate the market and actively compete for the mental focus of investors consumed majorly by global hype and the hope of becoming rich easily.

Notwithstanding bitcoin being the leading crypto having declined from more than $19,000 in December 2017 to more than $6,000 as per now, the enthusiasm for minor coins has also highly diminished.

The Deadcoin.com has been swamped listing all the cryptocurrency jokes, scams, and neglected projects and the list has today registered 800 cryptos, deemed "dead" - trading at less than 1 cent.

Aaron Brown, a cryptocurrency expert, said that "There has been obviously been significant fraud and hype in the ICO market. I have seen 80%  of ICOs were frauds, and 10% lacked substance and failed shortly after raising money."

Among the "dead" coins include the Detector token (DTCT) after being listed on the site as having "no communication or tweets for  over 8 months now." SipsCo (SIPS) Coin "perished after 10 days on coinexchange." Bchconnect (bchc) is portrayed as a lending "scamcoin."

Another coin that was launched as a joke, dubbed "Useless Ethereum," is now valued at $0.013425. During that time investors were willing to invest cash in various projects minus looking at consequences.

On the fundamental value of their suggestion, Useless Ethereum noted:

"You're going to give some random person on the internet money, and they're going to take it and go buy stuff with it. Probably electronics,  to be honest. Maybe even a big-screen television. Seriously, don't buy these tokens."

Regardless of this strong warning, an investigation from which major reports that the coin's launch increased $30,000 and still has $53,240 market capitalisation, according to CoinMarketCap.

The inability of the 800 coins is anticipated to have burnt yet much billion of dollars with great companies raising a sum of $3.8 billion through ICOs last year.

Nevertheless, the money lost may likely rise with a significance value of $13.7 billion made within the first half of 2018, and $1 billion of that was made by various coins that are currently regarded as 'dead'.

To all those maniacs that put money into mysterious cryptocurrencies, the woe is set to go forward since most money has been drawn into scams.

Anticipating a lot of woe for many investors, experienced analyst Aaron Brown, noted that:

"There has obviously been significant fraud and hype in the ICO market. I have seen 80% of ICOs were frauds, and 10% lacked substance and failed shortly after raising money. Most of the remaining 10% will probably fail as well."

Satis Group, an ICO advisory and analysis firm released data claiming that more than 80% of ICOs having a $50 million market cap and beyond, are scams and 11% of projects have failed or muted according to the research.