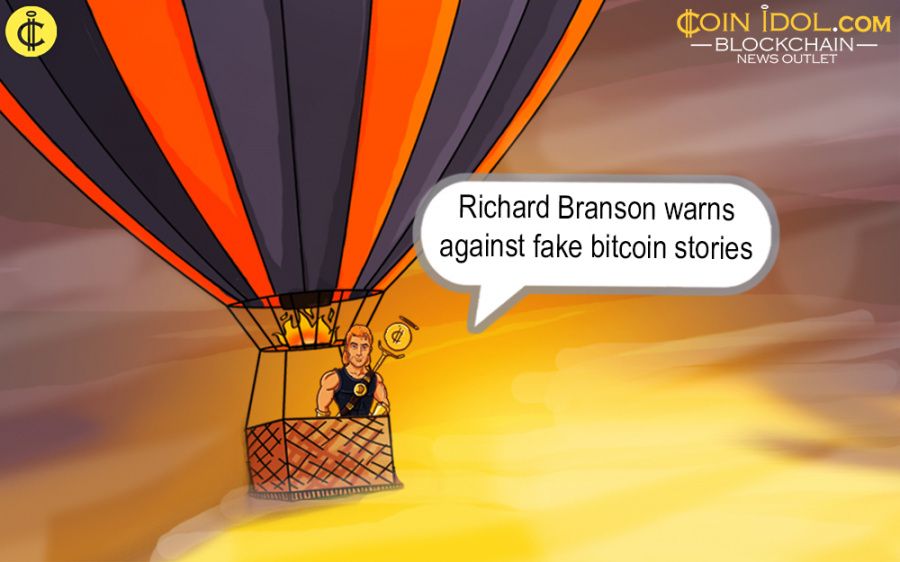 Richard Branson, Chief Executive Officer of Virgin Group has warned the public using his twitter handle and official Virgin website against the dangers of fake bitcoin scam. According to his current blog post "Beware of fake bitcoin scam stories," he expresses his interest in bitcoin scam fairytales, especially those involving his name.

In February this year, cryptocurrency scammers forged or hijacked Twitter accounts of the industry stars and set a lure under their real posts. Some of them were posted right under certified updates from John McAfee, 50 Cent, Elon Musk, Vitalik Buterin, Charlie Lee, U.S president Donald Trump and other cryptocurrency exchanges like CoinMarketCap and Coinbase. Fraudsters normally use similar usernames like those of celebrities hoping they will be taken for real, according to CoinIdol.com.

In March, a fake Elon Musk account using @elonmuskik as the username tweeted that the entrepreneur was to give way 3,000 Ether worth £1.7 million and this scam was amplified by various automated accounts most commonly identified as bots. From September 2017, the bots were dormant and didn't post anything but later came to chat to each other about the supposed cryptocash giveaway.

Also, Vitalik Buterin, Ethereum (ETH) cryptocurrency founder was so sick and tired of scammers pretending to be him that he changed his username to "No I'm not giving away ETH."

But Branson has been quick to mention his diehard supporters for blockchain technology and a 2013 blog post stating it was 'about time' that Virgin Galactic started allowing bitcoin to pay for flights. He pointed out that stammers had created advertisements with quotes from himself and famous Bill Gates.

"Our legal teams work hard to take down these fake stories or companies misrepresenting us. We are doing all we can and the police also work tirelessly to shut down the major operations. We would advise everybody to remain vigilant," said Branson.

He also advised his followers to always check the legitimacy of the sites they click through. If they follow some links, they must be sure the addresses and social media accounts are verified.

Lately, his warning looked at online scams, travel scams and he has now warned about misleading advertising that uses his great name.

Branson's warning is strange for its focus especially on cryptocurrencies but protecting a person against scams is a regular theme for him. "When you see a fake story, please report it to the platform you have found it on," he advised.

In April this year, Martin Lewis, British consumer rights advocate television star sued the Facebook company for accepting fraudulent advertising using resemblance with him and fake quotes on its platform. The habit affects many people negatively and some have come up to take a step in fighting scammers like publicly announcing crypto scammers posing as them.

Lewis has adopted the culture of protecting his identity by both corporate feedback and legal means as Bill Gates and Branson to remove the illegal ads and this has enabled him to recognise the size and capacity of the problem. Removing the ads from the sites consumes a lot of time, but one finished, "scammers just launch a new, nearly identical campaign very soon afterwards."

Some of the most common scams and  ways in which they can be avoided include:- Hardware wallet theft - they can be avoided by only allowing wallets that are from the trusted sources; Exchange scams - users must verify the exchange's URLs and their web addresses should always start with HTTPS, a sign that means that traffic is encrypted; Fake ICOs - close research that includes thorough examining the white paper, reviewing and verifying the team plus the important board members or investors; Cloud Mining Schemes - always look into all opportunities and understand the costs and risks before making investment; Multi-Level Marketing - it is crucial to pay attention to a company's fine print and make sure that their claims are real and visible.