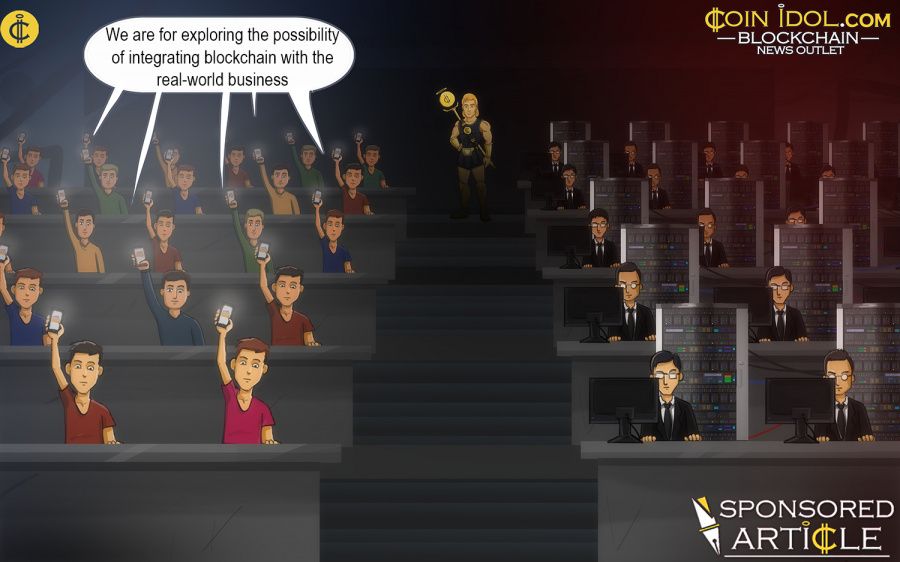 Since the dawn of blockchain technology, the digital currency communities have been consistently exploring the possibility of integrating such technology with the real-world business.

In the past ten years, blockchain has undergone three waves of evolvements: blockchain era 1.0 is represented by BTC, which is barely capable of practical application; blockchain era 2.0 is marked by ETH, whose main purpose is to build the foundation for Initial Coin Offering of various digital currencies; the recently heated EOS leads people into blockchain era 3.0, with the potential to engage in business activities across industries.

From BTC to EOS, the core elements throughout these three generations of evolutions in public chain technology are decentralization, scalability, and security. BTC suffered a lot in scalability, allowing maximum 7 transactions per second; ETH was slightly improved to allow 20 transactions per second, which is not fundamentally distinct from ETH though; EOS, for the first time, achieved commercial-level scalability, with tens of thousands of transactions allowed per second, and the number is expected to grow even larger in the future, at the cost of being more centralized and susceptible to manipulation of oligarchs.

To achieve a balance among scalability, decentralization, and security is the key to integrating blockchain technology with the real world:

Aside from increasing transaction throughput, public chain era 4.0 is also supposed to address the issue of transaction delays and high fee rates. BTC can sometimes have transaction delay up to several days, and the transactions through ETH may delay for tens of minutes. The ideally acceptable delay duration of EOS is 3 seconds. However, in the Chinese market where mobile payment is well developed, the offline delays of Alipay and Wechat are on average less than 1 second. It is clear that if the public chain era 4.0 wants to win an edge over the traditional trading methods, it has to keep its delay duration within milliseconds, and the overall delay duration of apps should be controlled between 1 to 2 seconds.

As for fee rates, BTC and ETH have too high a transaction fee to meet the demands of frequent transactions. EOS has made significant progress in this aspect, but public chain era 4.0 needs to go even further. The average fee rates of most transactions in era 4.0 should be lower than that of credit card and mobile payment.

BTC and ETH are completely decentralized public chains, but EOS has significantly sacrificed its decentralized feature for scalability. Since the decentralized nature is the core advantage of blockchain technology over traditional trading technology, EOS’s decision to weaken such characteristics makes it hard to attract the traditional businesses to transform to blockchains.

Public chain era 4.0 needs to maintain its unique competitiveness of decentralization with scalability also strengthened. The prospective blockchains will not tolerate any monopoly or manipulation but will strive to return the rights to all the ordinary users.

In blockchains, security is closely related to privacy protection. A major threat to security of BTC and ETH is the full disclosure of transaction information. Such feature makes real-world transactions involving private information (such as home addresses, ID numbers, and telephone numbers) almost impossible in these public chains.

Public chain era 4.0 needs to ensure the privacy of transaction information for both parties, sparing them from worries about personal data exposure to third parties. This is the fundamental logic behind most real-world business models. Even in case of serious privacy incidents, public chain era 4.0 should be able to trace back transactions and effectively scale down losses.

Only a public chain with these goals achieved can really attract the attention of traditional commercial capitals and widely promote the blockchain technology and its corresponding business models in real-world trading. 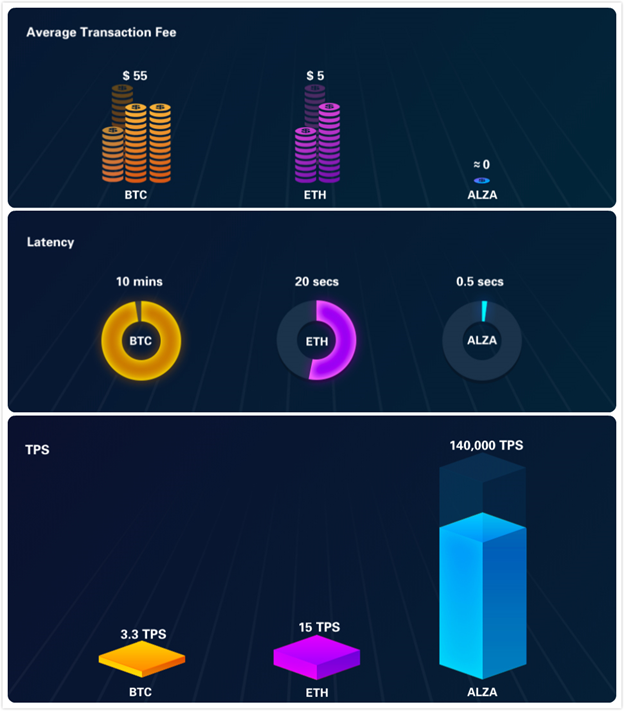 ALZA, developed by a team from Silicon Valley with rich experience and strong technology capacity, is the most promising candidate to represent public chain era 4.0 and truly expand the blockchain technology to the real-life business. ALZA's White Paper is published as paper about embedded technology and accredited by Cornell University on May 25, 2018. It is an extremely rare honor in the field of blockchain technology, up to now, only a few top-ranking public chains such as BTC and ETH have received such honor.

1. Similar to EOS, ALZA adopts the structure of Delegated Proof of Stake based on Consensus Model and Super Node. Besides, ALZA transfers the transactions at key links to off-chain transactions. The payment process is completed in a temporarily trading space composed of only a few nodes. There is no need to share data in sync to all the nodes in the entire chain, thus the transaction efficiency is greatly improved. Currently, ALZA is able to process a million transactions per second with only a few milliseconds delay. The average transaction fee rates is almost negligible, which makes high demands of daily commercial payment out of question.

2. Although ALZA share the advantages of EOS, such as 23 super nodes and node rotation, it does not greatly sacrifice the decentralized feature as EOS did. ALZA adopts an innovative Redundant Array of Satellite Infrastructure (RaFi), which completely returns the transaction data and Dapp app data back to the general users. As a result, all users share equal rights and interests, which successfully stifles platform monopoly in the cradle. Maintaining the decentralized feature is ALZA’s sharpest edge over blockchain era 3.0.

3. ALZA guarantees complete off-chain data storage, which means the transaction data is only shared between the two parties in concern but not with the main chain, therefore ensuring the privacy of both parties. Powered by RaFi technology, all transaction history and sensitive data of Dapp application are distributed to all nodes in the network to ensure encrypted storage and backup. Whenever transaction errors occurred due to fraud, external attacks, hardware malfunction or even disasters, ALZA would set specific transactions back to the previous secure transaction snapshots, which basically eliminates any security threats. 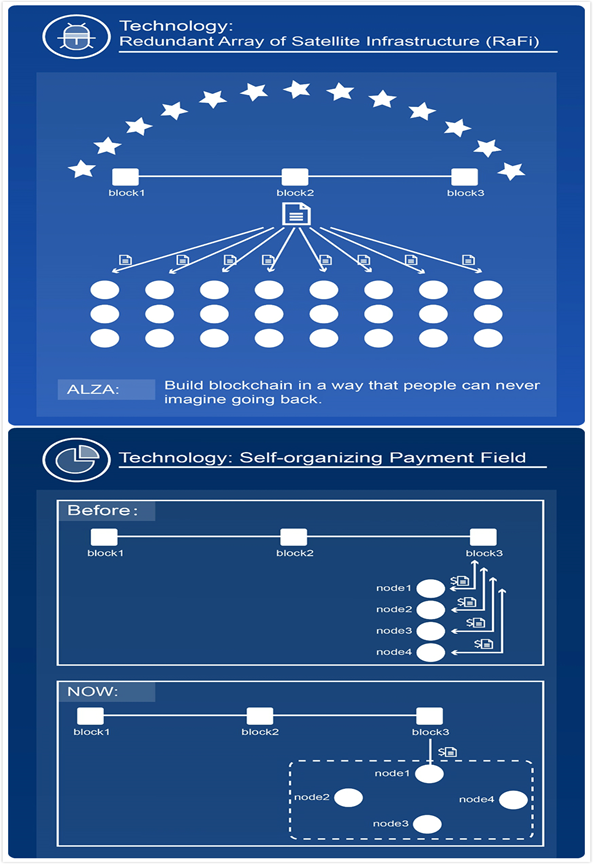 Through balancing and optimizing the three basic elements, ALZA has paved the way for widespread application of blockchain technology in the real world. ALZA can provide a very good business model for at least three economy sectors:

1. The retail sector. ALZA's large transaction throughput and very low delay can even bewell matched with top platforms such as Alibaba. Its high level of security even exceeds average credit cards, at almost negligible costs. In the Europe and American market, ALZA is a good substitute for credit cards and PayPal among small and medium-sized retailers and e-commerce platforms. It helps them save transaction fees equivalent to 2% to 5% of their sales, and basically eliminates risks such as credit card fraud and so on, which is very tempting for SME owners.

3. Market of Internet of Things, games, live video and so on. ALZA's extremely high transaction throughput, ultra-low delay and almost negligible fee rates make it capable of meeting the high demands of micro-payment for online games, live video, and Internet of Things industries. The business owners in these industries will benefit from increased service capacity at lower costs and risks if they transfer the transactions to ALZA.

In conclusion, ALZA managed to reach a perfect balance among these three basic elements of blockchain through key technological innovations, and ultimately lead people to the critical point of integrating blockchain with the real world.

Compared with other blockchain projects, ALZA team is outstandingly professional and academic: Eric Li, the team leader, was actively engaged in Google's top big data R&D project and is the winner of ASONAM Best Paper Award. He has obtained rich experience and academically achieved a lot in data analysis, data mining, core architecture and other fields. Nate Zhou is the project manager for Intuit Building, the largest SME payment platform in the United States. He has a profound insight into technical infrastructure, architecture design, and risk control for payment products. And the other team members also participated in core technology projects from top companies such as Google, all of them are full of passion and confidence about blockchain technology.

ALZA, with its top-class team, has made astonishing progress. Ever since it released the white paper, it was immediately accredited by the professionals from Cornell University and was published as paper about embedded technology. It is an extremely rare case in the blockchain industry, and up to now, only a few top-ranking public chains such as BTC and ETH have ever been honored like this. ALZA team believes that the traditional centralized payment technology is very well-developed and robust whereas the existing blockchain projects are underdeveloped and fragile which are incapable of subverting the traditional business model. ALZA has made unprecedented breakthroughs and achieved bank-level performance, security, and robustness, which enables ALZA to be a competitive alternative to traditional centralized business systems.

In the history of blockchain development, only outstanding products that achieved key technological innovations and eliminated the pain points can fall into the favor of market and investors, so as to achieve 100-fold increase or 1,000-fold increase. Nowadays, ALZA is a public chain platform integrated with many advantages of its predecessors, and also the most promising platform that can be widely promoted in the traditional business sectors. Its development prospects are comparable with those of BTC, ETH and other predecessors. After ALZA went online, it received warm attention and invitation from American investment agencies and rating agencies. ALZA’s Telegram group have attracted 55,000 overseas fans in just two months, where questions about technical theories and innovations were raised. It also attracted 9,000 fans on Twitter. Overseas media speak highly of ALZA and widely produced reports about it.

If ALZA managed to lead the step-by-step integration of the blockchain community with the real business world, it would create wealth worth over a trillion dollars, bringing unimaginable returns to its early-stage investors. ALZA, a warrior of public chain era 4.0, is probably the best investment target in 2018 and deserves close attention from everyone.