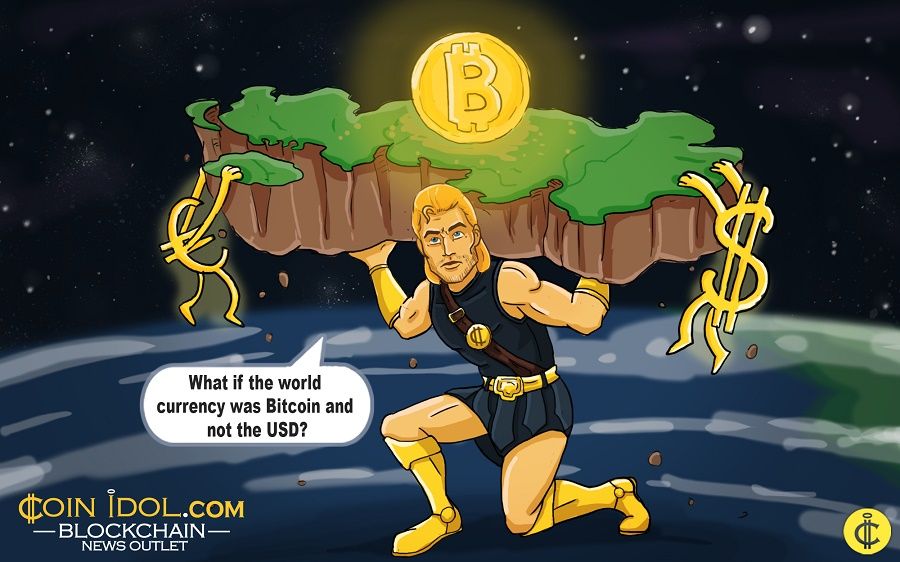 From observing the world economy situation, someone can easily understand we have reached dangerous times. Global debt has grown up to 230 trillion dollars with world GDP at 75 trillion dollars. The need to service this debt has led central banks to attempt to manipulate  the economy through  zero or even negative interest rates.

Due to the baby boom, many government bonds will expire by 2020. However, the ‘finance bubble’ will be significantly bigger. It has been clear for some time that there was another financial bubble, and that one day it would burst, not only in the United States but in the European Union too.

Coinidol’s correspondent has asked 8 experts: “What are your thoughts on if the world currency was Bitcoin and not the US Dollar?”

“Global and national debt will be fair, equitable and more accountable if we all adopt Bitcoin as default crypto/fiat currency. It will be cheaper to service national debt. The decentralized nature of the Blockchain offers a unique opportunity to mitigate against manipulations by Central Banks and financial institutions. Foreign exchange rates will be market driven instead of being rigged.”

Elizabeth (Ploshay) McCauley, Global Business Development Head of Coinsecure at India and member of the Bitcoin Foundation, has shared with us:

“You are correct that global debt is skyrocketing. Bitcoin is not subject to inflation and there are only a fixed number of Bitcoin that will ever enter into the ecosystem. Bitcoin is also decentralized and not manipulated by a central point of control/failure. As central banks continue to print paper currency, increase inflation, and manipulate markets, Bitcoin presents an opportunity for investment and a form of payment. When you ask about having Bitcoin as a “world currency” there are a few areas to be concerned about - One of Bitcoin’s most significant traits is that it is not controlled by one specific individual, government or group of people. If you are to make “Bitcoin the world currency” there is a danger of further additions of central control over the protocol and development. It is best for Bitcoin adoption to increase in a decentralized manner where individuals choose to opt in to use this technological phenomenon. Central banks have much to learn from Bitcoin and blockchain technology. There is just a danger of making Bitcoin a “central bank coin”.

Lee Gibson Grant is the owner of Tech Announcer and founder of     Moldova's first blockchain Lab. Tech Announcer is a Technology News Website and Technology Review website, part of Drachmae Project “Blockchain 4 Media”. He told us:

“The figures given are compiled from outstanding government bonds. Any government simply needs to issue new bonds to service expiring ones. The issue lies in their inability to stimulate the velocity of money flow through their economies, I.e. get banks to make more loans, and companies to spend, and get consumers to buy. Bitcoin cannot scale to being the global currency at the moment, and arguably will never. So technically infeasible. However, for Central Banks to issue scalable, sovereign backed cryptocurrencies is a viable route, although issues like anonymity and accessibility mechanisms must be solved first.”

“The main difference here is that Governments would not be able to print more money if needed to repay the debt. If we forget about volatility of bitcoin, I guess the economy would look like it was when value of currencies were strictly linked to the gold reserves”

John Jegutanis, founder at Coinomi Ltd, Coinomi wallet is a very secure and lightweight, open-source, universal HD wallet for bitcoin and other cryptocurrencies, told us:

“As the supply of Bitcoin is fixed, it's risky to take long term loans in BTC as the price could increase. This is one of the reasons where fiat is useful: with time and inflation your debt is worth less.”

Panagiotis Pollis is the founder of Bitfortip.com, a social reward platform where you tip Bitcoins as an incentive and earn Bitcoins for being helpful. As an entrepreneur, he said:

“It is a big issue as, with time, people will have less value with each passing year from conditions and powers out of their control. If Bitcoin was the world currency, then that would limit many options on what banks and governments could use to manipulate the economy. At this early stage though we do see that Bitcoin is also affected temporary from any announcement made from major countries around the world but it shows that it is becoming more resilient overtime, as transactions and users are increasing and the price doesn't fluctuate so much as it used to in the early days.”

Colin Gallagher is an Advisory Board Member at Lifeboat Foundation, and Chair of the Education Committee at the Bitcoin Foundation, he commented:

“Global debt is a major issue and, as an example, U.S. national debt will arguably be one of the biggest issues facing the new U.S. administration -- Puerto Rico's situation has gone from bad to worse, but it is not impossible to recover. It may seem impossible, but the U.S. government needs to stop printing unlimited amounts of money and work on controlling its expenditures at home and abroad. I would not recommend the approach of having a "world currency," but rather I would recommend a policy approach of accepting and allowing people to utilize bitcoin freely without adding regulatory schemes that target users (any new regulation should focus on development of security standards for exchanges, and not put any new requirements on individual users or on businesses that accept bitcoin).”

Alex Palantzas is Head of business development at BTCjam, a marketplace where people from around the world connect to borrow and lend using Bitcoin. He commented:

“One of the main reasons are the demographic future of EU. Above 40 years, a person it is difficult to educate them and adopt the bitcoin, also the youngers are less as demographic numbers to be taught and then teach the oldest. Instead at Indonesia, Mexico and Venezuela the adoption is more, because the youngers are more people at numbers, easily can be taught and educate for using bitcoin. Of course, central bankers see it as a problem because it ll take away their usually "job" or force them to evolve.“

The people have the final word, it is up to them to either adopt it or to avoid it, but for once the truth must be told!