Wikileaks Store States Coinbase Has Shut Down Its Bitcoin Account 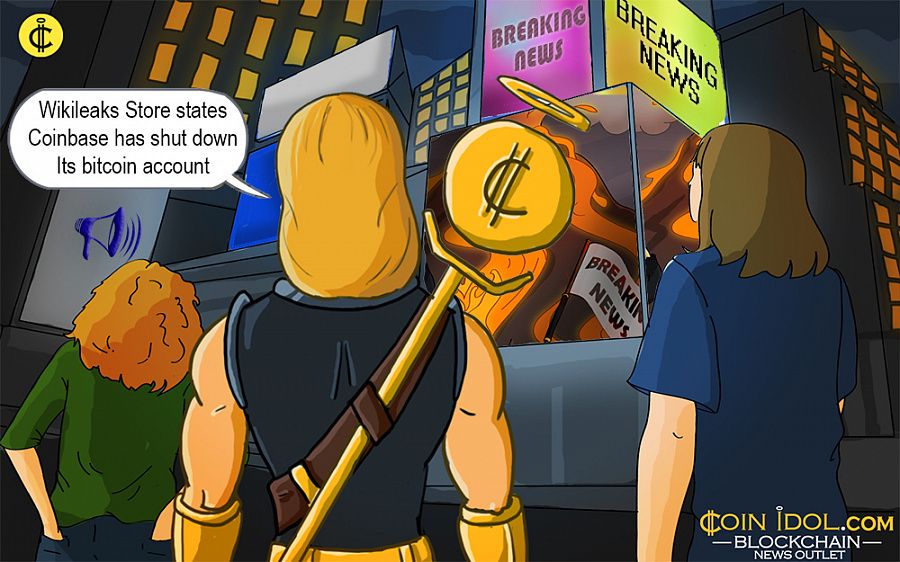 A claim by Wikileak’s official online store states that its account with Coinbase was suspended by the cryptocurrency exchange. In 2016, Wikileaks was central to a long string of international scandals before the presidential election according to the leaked document depository and it is now calling for a boycott of coinbase. Coinbase says that its primary goal is to make digital currency safe and secure for its customers.

According to reports, an unconfirmed announcement from Coinbase has irritated the Bitcoin community and also highlighted certain unavoidable tensions as cryptocurrency becomes increasingly commonplace. Wikileaks Shop claims to have received a note that was posted on Twitter from Coinbase that appears as if the cryptocurrency exchange cites U.S government financial regulations as one reason for the suspension.

A letter sent to Wikileaks by Coinbase states “Coinbase is a regulated Money Service Business under Fincen that is obligated to implement regulatory compliance mechanisms. Upon careful review, we believe your account has engaged in prohibited use in violation of our terms of service and we regret to inform you that we can no longer provide you with access to our service.” The letter continues to show the instructions that “We respectfully request that you follow the on-screen instructions presented when you log into your Coinbase account to send any remaining balance offsite to an external address.”

There are no indications that show how Wikileaks specifically violated the rules. Coinbase is concerned about Wikileaks to operate legitimately in order to prevent money laundering and other illegal activities.

Wikileaks also responded immediately via a tweet upon receiving Coinbase’s notice and called for the crypto community to stop using the exchange until further notice. “Wikileaks will call for global blockade of Coinbase next week as an unfit member of the cryptocurrency community.

The suspension by Coinbase will not stop Wikileaks from accepting payments or donations through Bitcoin though the organization may have to doom a lot of resources to handle its accounts directly and will find it more challenging to convert bitcoin to other currencies such as the dollar.

Bitcoin has gained a lot of popularity as it can be used to bypass or avoid existing financial regulations and systems including banks. Andreas Antonopoulos pointed out on twitter that many politically involved users were first attracted to Bitcoin as a way of donating to Wikileaks after being cut off in 2010 by traditional financial services.

Although Coinbase has attracted a lot of users to Bitcoin and many more crypto exchanges by providing an easy way for them to be bought and used, its status as a regulated U.S business means it must accord and agree with U.S financial regulations. Most Bitcoin advocates remain questioning and skeptical of Coinbase and other intermediaries due to the exposure and many act as caretakers of customers’ cryptocurrency, defensibly increasing systemic risk in an occurrence of their failure.