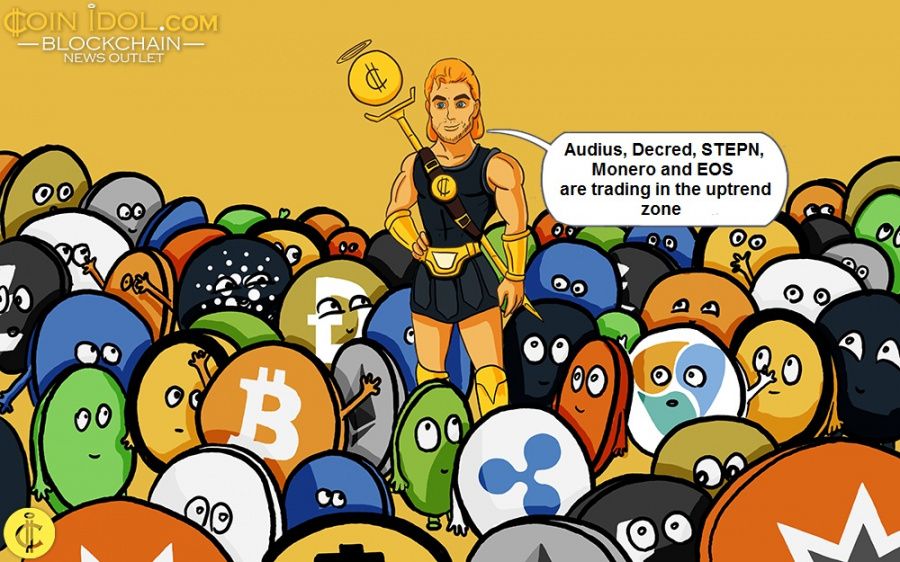 Bitcoin has regained the psychological price level of $40,000. However, it is doubtful whether the bullish momentum can be sustained above this high. The cryptocurrency is trading in the downtrend zone and lacks buyers at a higher price level.

Unlike Bitcoin, the altcoins such as Audius, Decred, STEPN, Monero and EOS are trading in the uptrend zone. These altcoins have the tendency to rise to the previous highs. Let us take a look at each of these cryptos.

Audius (AUDIO) is in an uptrend and reached the high of $1.81. Buyers could not maintain the uptrend as it was pushed off. The cryptocurrency fell to the low of $0.99 and continued the consolidation above the current support. The altcoin's price is above the moving averages, which will help AUDIO to rise.

In the March 19 uptrend, a retracement candlestick tested the 50% Fibonacci retracement level. The retracement catapulted the altcoin to the 2.0 Fibonacci extension level, or $1.71. The initial uptrend was completed at the $1.75 high. Further upside is possible above the recent high. AUDIO is the best performing cryptocurrency in the past week. It has the following characteristics: 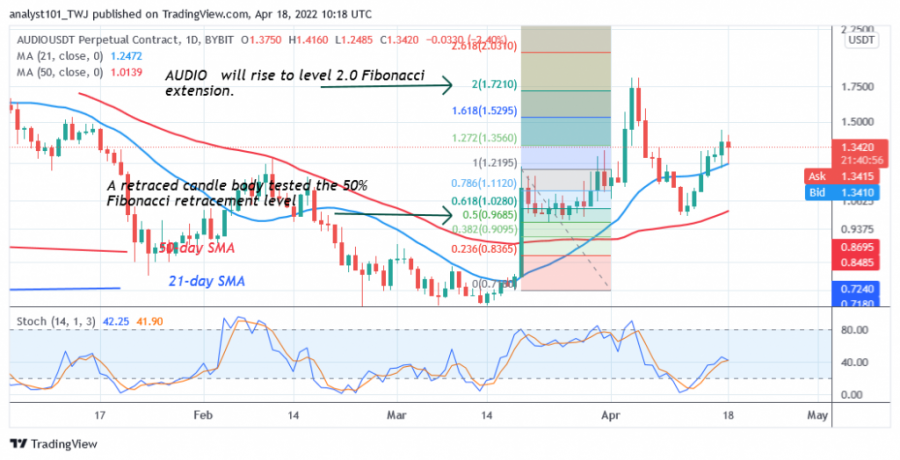 Decred (DCR) is in a sideways trend as the cryptocurrency fluctuates in a range. The altcoin was previously in a downtrend, but selling pressure has eased as the market reached the low of $51. Since January 10, DCR/USD has been in a trading range between $52 and $69 price levels. Buyers have failed to break through the resistance at $69. If the bulls break the recent high, DCR could rise on the upside to the previous highs at $90 and $110. DCR is the second-best performing altcoin in the past week. The cryptocurrency has the following characteristics: 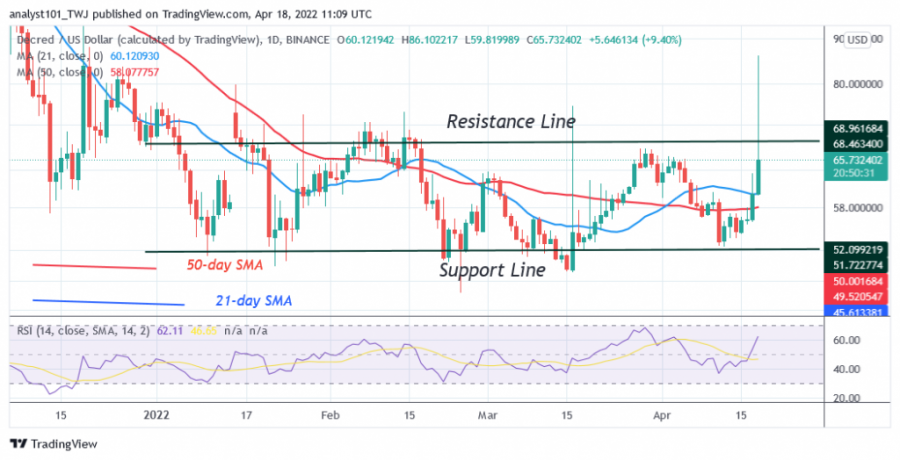 STEPN (GMT) is in an uptrend, but the bulls fail to overcome the overriding resistance at $3.0. In the April 1 uptrend, the bulls were pushed back at the $3.00 high as the altcoin fell to the $2.0 low.

On the April 17 uptrend, a candlestick tested the 38.2% Fibonacci retracement level. The retracement suggests that the altcoin will rise to the 2.618 Fibonacci Extension level or $3.42. The price action shows that the altcoin has risen to $3.00 and then was pushed back. It is the cryptocurrency asset with the third best performance in the past week. It has the following characteristics: 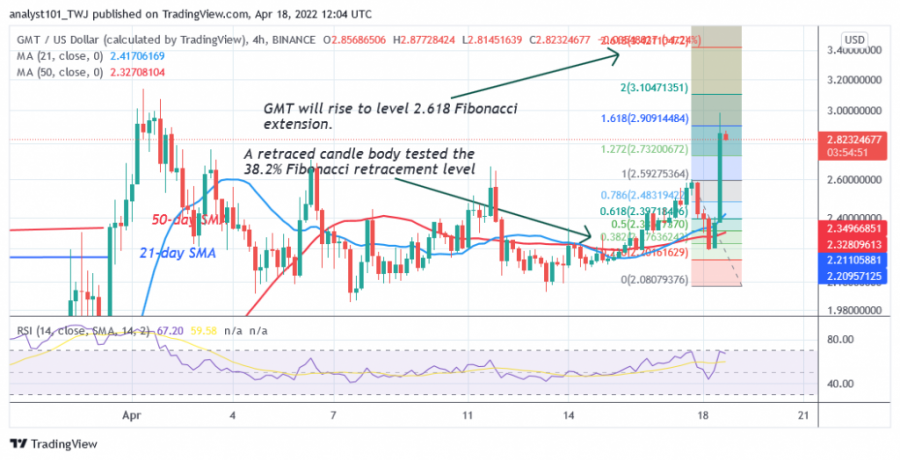 Monero (XMR) is in an uptrend. The price of the cryptocurrency has risen above the moving averages. The altcoin's price has a series of higher highs and higher lows. Buyers pushed Monero to the high of $271, but then retreated. Bulls failed to sustain the bullish momentum above the $252 resistance. The altcoin fell back to the low of $252. If the upward momentum continues, the market will reach a high of $295.

It is the cryptocurrency asset with the fourth best performance in the past week. 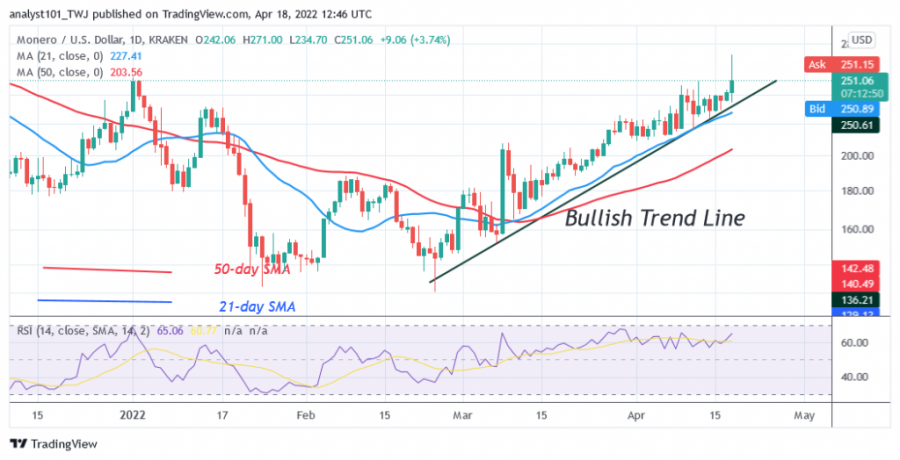 The cryptocurrency is likely to move in a range between the moving averages. If the bulls break the 21-day line SMA to the upside, EOS will regain the previous high of $3.00. On the other hand, EOS will fall to the low of $2.12 if the bears break below the 50-day line SMA. EOS is the fifth best performing cryptocurrency in the past week. 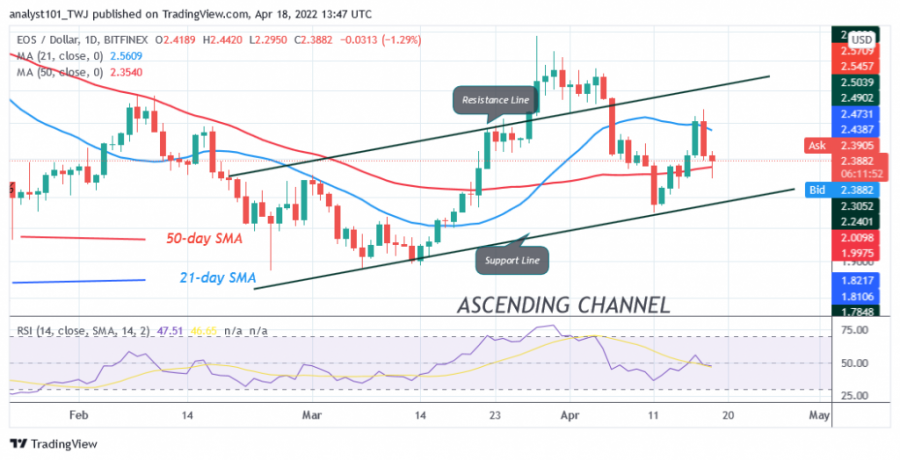