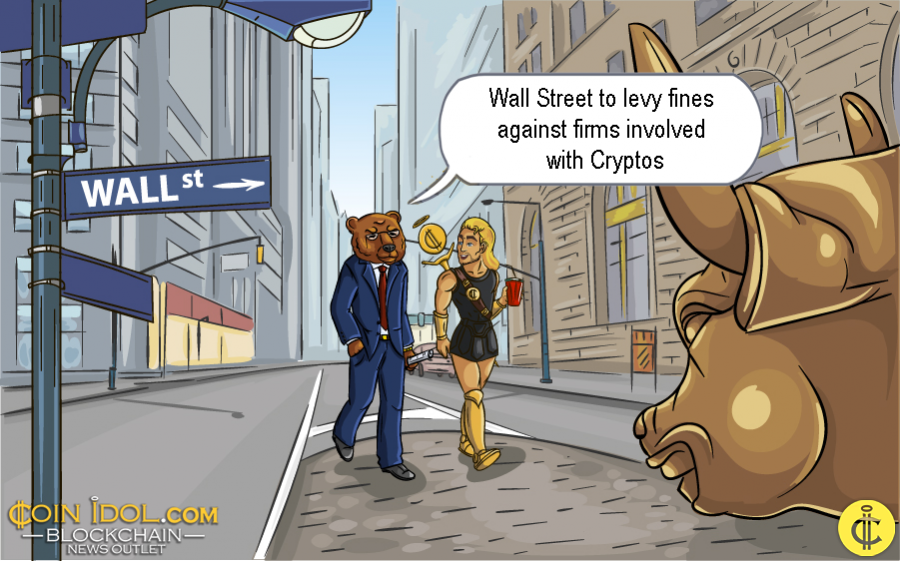 On Tuesday, September 11, two Wall Street regulators announced several actions, including levying fines against firms involved with Cryptos, in a gust of activity showing efforts to oversee the unregulated and popular asset group.

Cryptos such as Bitcoin, Ethereum, Ripple, Litecoin, are virtual tokens which can be widely used as methods of payments on multiple online applications. They can also be bought and sold on various set-apart online exchanges.
Securities regulators have increased their inspection of the incipient asset class, indicating that some virtual tokens may be deemed securities, which would put their issuance, sale and trading under federal laws. Jay Clayton, US SEC Chair noted in Feb he strongly thought most of the sales of new virtual tokens (ICOs), should be regarded as securities. Albeit, the US SEC hasn't definitely categorized which coins are securities or not.

On Tuesday this week, a New York federal judge ruled that a lawsuit case could continue in which US securities law was being used to charge scam cases that involves Crypto offerings.

In the first of three different actions announced on Tuesday, September 11, the Financial Industry Regulatory Authority (FINRA) indicted Timothy Ayre of perpetrating securities scam after he sold and marketed the crypto HempCoin. Timothy is the owner of Rocky Mountain Ayre.

HempCoin was backed by huge shares of Rocky Mountain Ayre, but Timothy never registered the crypto as a security, FINRA noted. Between the year 2016 and 2017, several investors mined over 81 million HempCoin, that they reportedly traded on the crypto exchanges Yobit and C-Cex.

Timothy could be fined or suspended from the securities sector. A lawyer who is representing Timothy, Franklin Ogele, noted they are considering to battle the charges since it's ambiguous that HempCoin can be deemed a security.

Criminals to Pay the Price

The US SEC revealed on Tuesday this week that the heads of TokenLot, Eli Lewitt and Lenny Kugel accepted paying $471,000 in disgorgement and interest to clear charges that they worked as unregistered broker-dealers for the trade of digital tokens.

Lenny went on to remark on the settlement. Lenny, Eli and TokenLot didn't agree or reject the SEC's findings.

Ultimately, the SEC noted that the hedge fund Cryptocurrency Asset Management LP agreed to pay a $20,000 fine after it was discovered to have provided a fund it deceitfully noted was regulated by the SEC when in reality it wasn't.

The fund plus its manager Tim Enneking, who was included in the order, neither agreed nor rejected the SEC's findings.

Tim, in a telephone interview, noted that the company cooperated with the US SEC and deleted two statements from its official website immediately after the regulator apprised it about the concerns.

“There is nothing in the order about financial impropriety, no investors were harmed, and this has not impacted the fund’s operation or performance at all,” Tim said.

Some experts totally agree with the need for regulations. According to George Goognin, Global Ambassador at the Mile Unity Foundation aimed to educate the community about new technologies and tools for the global retail, b2b and intergovernmental (g2g) payments, and Vice-Chairman of Expert Council on digital economy and blockchain technology at the Russian State Duma, “if some asset behaves as a security, and if there's a centralized issuer, it's got to be regulated as an IPO.”

“The only way to avoid the IPO regulation is to be 100% decentralized and don't perform a token sale. Bitcoin was minted from zero, and it was issued by the distributed network, that's why it's approved as non-security in many reputable jurisdictions.

Unfortunately, the big ego and the quick buck race are increasing the amount of centralized coins. That will lead to even more strict regulation, so the small startup-teams will be pushed out with big whales from the crypto-market. This trend is already visible.

Whales, obviously, have much more money, so the overall crypto market size will grow. But the coins issued by the small teams, are now having the bigger pressure and risks of being claimed as a security and banned. If the owners will fail to make a pivot or to solve the legal issues, their coins will fall.”