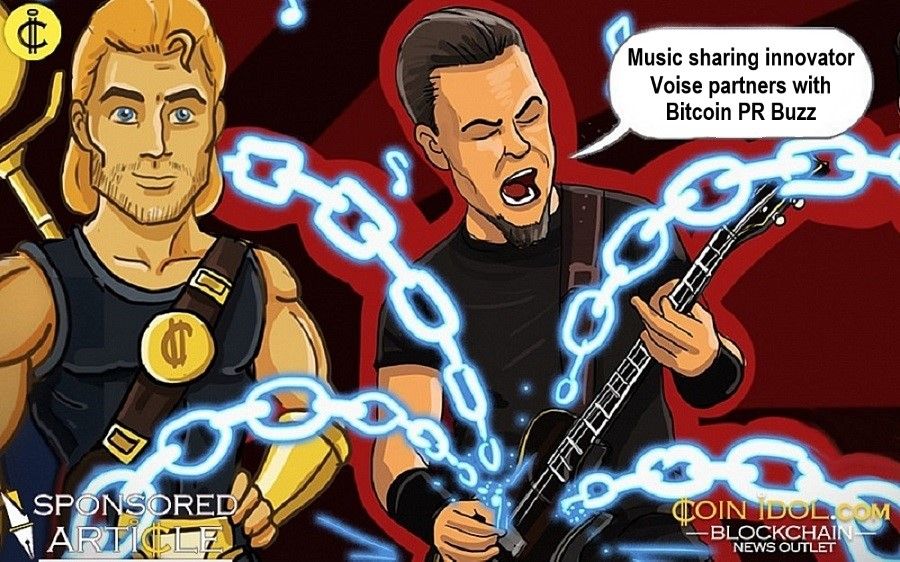 Blockchain-based music sharing platform Voise is looking forward to a year of increased publicity after officially announcing a new partnership with veteran blockchain PR agency Bitcoin PR Buzz. It is hoped that the formal relationship will help promote and raise awareness about Voise’s efforts to revolutionize the music industry with blockchain innovation as the start up continues to meet development targets of its platform.

Voise CEO and Founder Ivan Rossetti expressed high hopes for the new cooperation, believing that Bitcoin PR Buzz’s skilled expertise and familiarity with the industry makes them the perfect candidate for promoting Voise’s blockchain music platform and its equitable model of distribution to an international audience.

Similarly, the team at Bitcoin PR Buzz viewed the deal with great optimism, noting that the Voise technology and proposed development directions has the potential to deliver the much-needed unique and viable solution the stricken music industry. The consultancy firm believes Voise to be a premier blockchain project and looks forward to supporting their public relations effort in 2018.

The Music Industry: Down But Not Out

Despite technological advancements in the production of music, the industry itself has been in a long-term slump since the proliferation of digital technology, with music labels and artists worldwide experiencing weaker sales. As more music listeners turn online to spend their money – either through direct downloads or streaming subscriptions, brick-and-mortar stores are under increasing pressure to cease the sales of physical music albums.

Music labels and artists have been forced to turn their attentions online to protect revenue, although independent artists face extra challenges of high production and promotion costs, while being unable to protect themselves from content piracy. Voise believes that the industry’s ailing revenue can still be revived thanks to the freedom of decentralization, enabled by sophisticated blockchain technology. Its music streaming platform makes use of the mature technology of the Ethereum blockchain and has already introduced a new feature in the form of the world’s first Masternode implementation on Ethereum.

The Voise solution promises a new ecosystem of financial independence, permitting music producers to directly earn revenue from the sale of music, while creating a conducive environment for fellow musicians and fans to interact and built their own communities without the restrictive purvey of centralized parties.

Powering this ecosystem are VOISE tokens in the shape of ERC20-compliant tokens based on the Ethereum blockchain – the industry standard for highly secure blockchain-based digital assets. Effectively, VOISE is the in-house currency that can be used to interact on the Voise platform but can also be traded, bought or sold externally for other forms of currency, directly between users without ever requiring the need for intermediaries.

What is Bitcoin PR Buzz?

Bitcoin PR Buzz pioneered the world’s first PR agency specializing in blockchain start ups and cryptocurrency projects. Over the past four years, it has worked with more than 500 clients to market and promote their work online to a global audience within the crypto and financial technology spheres.