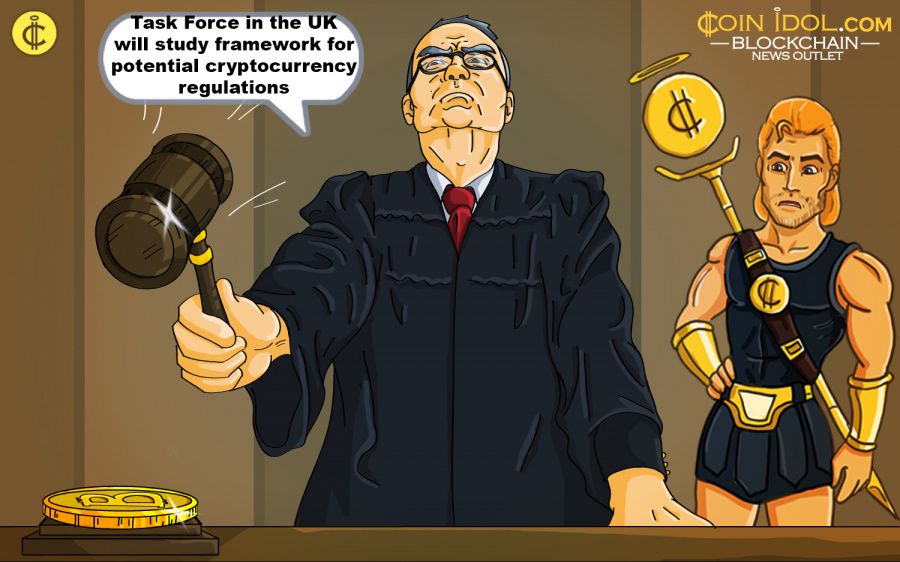 A new Cryptoassets Task Force was set up in the UK on March 22, 2018, by the Treasury, Bank of England, and Financial Conduct Authority (FCA) to explore the risks of cryptoassets, the benefits of this technology, and its influence.

The UK’s Chancellor of the Exchequer, Philip Hammond, stated in a policy paper titled Fintech Sector Strategy: Securing the Future of UK Fintech that the government intends to study the important issues by “understanding and engaging with the implications of new technologies.”

In a push towards regulation, the Cryptoassets Task Force will decide how the authorities will deal with cryptocurrencies in the Fintech industry. Regarding the recent volatility of the cryptocurrency market, investors are at risk. Hammond explains, “Like traditional assets, cryptoassets may act as a store of value, but they have recently been subject to speculation which has led to significant volatility, contributing to them being risky investments.”

But Mark Carney, the Financial Stability Board (FSB) chairman and Bank of England governor, stated in a letter addressed to the G20 finance ministers before this year’s meeting in Argentina, “The FSB’s initial assessment is that cryptoassets do not pose risks to global financial stability at this time.” In fact, the technology behind cryptocurrencies could actually “improve efficiency and inclusiveness” to the whole economic system. This could change, however, if cryptocurrencies in the future are used more than the current regulated financial system.

Carney’s concern included protection for investors and the necessity to “shield illicit activity” such as money laundering and other crimes. Since it’s an unregulated market, the cryptocurrency space has a freedom not seen in regulated sectors. Carney adds, “In my view, holding cryptoasset exchanges to the same rigorous standards as those that trade securities would address a major underlap in the regulatory approach.”

This talk of regulation has spooked the cryptocurrency environment, mainly driven by fears of a regulatory vice put on the whole industry, a stop-gap measure to slow this alternative fast paced movement that appears to have no accountability, except on a peer to peer basis which cuts out the middlemen, the banks, and other financial institutions.

Two examples of an unwillingness to fully embrace the cryptocurrency movement are with countries such as South Korea where they want to close cryptocurrency exchanges completely, and in China where restrictions will be imposed on peer-to-peer platforms and over-the-counter options. In the US, Treasury Secretary Steven Mnuchin said previously that his agency is analyzing what’s going on with Bitcoin “very carefully.” The Securities and Exchange Commission (SEC) is also monitoring digital currency exchanges in the US.

At the annual International Fintech Conference in London, Chancellor Hammond gave a speech indicating what role the new task force will have. “A new task force will help the UK to manage the risks around cryptoassets, as well as harnessing the potential benefits of the underlying technology.” A closer examination of the technology behind cryptocurrencies will help the task force gain a new perspective while understanding the force behind its revolutionary movement.

Additionally, Hammond announced other novel applications for cryptocurrencies like ‘robo-regulation’ pilot schemes to assist Fintech firms and the financial industry as a whole by creating software that assists in endorsing the rules.

Although it’s an important step forward by ensuring consumer protection and longevity of the market, ironically, it was the 2008 plundering of the stock market which helped propel the cryptocurrency movement forward as an unfettered, unregulated, unmanipulated alternative where peer-to-peer transactions were more trustworthy than the current system that failed investors.

Regardless of what governments do in the process leading up to “regulation,” the demand is still fierce with or without them and it’s growing at an unprecedented rate. A new regulatory framework for this exciting alternative Fintech environment would bring together the old guard and new guard, where regulators will work collaboratively with cryptocurrency members, hopefully with positive results. A new day is dawning and it’s the determined masses who are forcing the cryptocurrency narrative closer to revolutionary change with innovation front and centre.

The fundamental differences though are the philosophies behind the centralization and decentralization models of doing business which is the basis of the current system and the cryptocurrency movement. If a compromise is possible, new ways of doing business and the potential for creativity are unlimited. If not, the outcome is anyone’s guess. The G20 economic leaders will give recommendations by July and the Cryptoassets Task Force results will be shared in the summer as well.