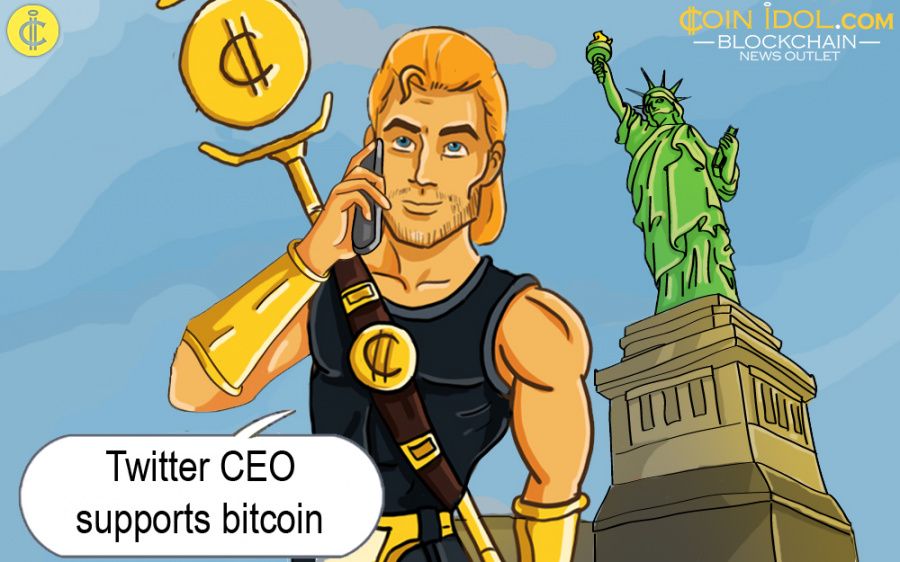 Jack Dorsey, Twitter and Square Chief Executive Officer, has backed bitcoin to be the internet-native currency of the future, as the battle with other cryptocurrencies like Ethereum goes on. Dorsey declared that he has hopes that bitcoin will continue to establish itself as the primary method of payments.

Dorsey is also a personal investor in bitcoin who expects the digital currency to be applied in trading of simple things like coffee and he anticipated a 10-year timeline for bitcoin to have dominated the industry. Dorsey is a huge fan of bitcoin and that the internet deserves a native currency but also accepted that he is not sure whether it will prove to be successful in long run.

According to him Square, an IT service management company, can become a vanguard cryptocurrency that is legally allowed as one of the means among global payments system. He stated that If cryptocurrency were globally used, it would make it easy for Square to enter new markets around the world.

"If we were able to use it as a currency today, we could release our apps in every app store around the world instead of the five we're in," he said.

Square launched cryptocurrency trading via its cash app in January this year.

Dorsey said at the Blockchain Conference in New York on Wednesday:

"The internet is going to have a native currency so let's help it happen. I don’t know if it will be bitcoin but I hope it will be."

Square spent $33.9 million to purchase bitcoin to permit customers to trade it via its Cash mobile payment app and this generated a revenue of $200,000. It sold a total of $34.1 million in bitcoin within the first quarter.

Dorsey explained whether cryptocurrency like bitcoin could be used as the future for all payments: "We have led with that mindset. But there's still a lot of skepticism and a lot of debate and a lot of fights. But that's where the magic happens, where creativity happens."

This year, bitcoin has fallen by roughly 40 percent and was trading near $8,260 on this Wednesday. Competing cryptocurrencies such as Ethereum, Litecoin and Bitcoin Cash similarly experienced downward trends in the previous week.

In March, Dorsey said that he had expectations that bitcoin is to become the single global currency within 10 years to come.

Tags
Bitcoin Twitter Cryptocurrency Industry Payment Ethereum Future Trading Cash
Most Popular
May 29, 2021 at 12:09
News
Polkadot Price Reaches the Oversold Region, Downward Move Is Doubtful In the Interim
May 29, 2021 at 11:01
News
Uniswap Price Recovers Above Support Level as Buyers Push on the Uptrend
May 29, 2021 at 09:12
News
58% of Large Hedge-Funds are Interested in Cryptocurrency Despite the Drop
May 28, 2021 at 14:34
News
Ethereum Rally Stalls at $2900 High, Resumes Sideways Move below Resistance
May 28, 2021 at 13:33
News
Can a 1.5 Billion Investment Push Ethereum to New Highs?
More