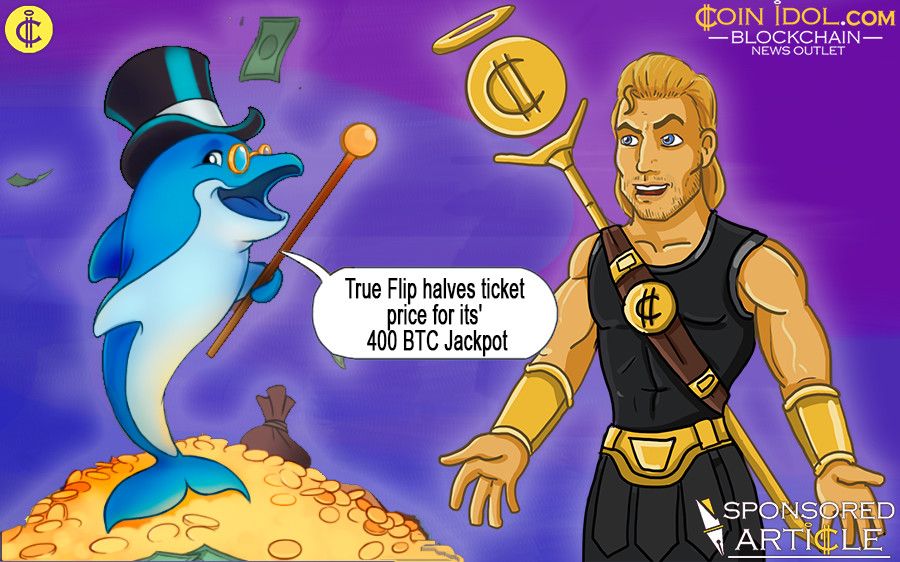 True Flip is fulfilling its crowdsale pledge by presenting a revamped and redesigned interface for its decentralized fair games platform. The updated interface for blockchain lottery platform with instant payouts now has the ability to integrate products and options on-the-fly, enabling players to switch seamlessly between games.

Currently, players can switch between "Flip's Star" - a lottery game where players have to guess 6 numbers between 1 and 49, and Rapid To The Moon - a fast numerical draw game based on the speed of generating new blocks on the blockchain - on-the-go.

Three more games are scheduled to be added to the platform between Q1 and Q2, 2018. These improvements represent the fulfillment of 60% of True Flip’s crowdsale pledge. The crowdsale successfully ended on July, 29 after raising 2000 BTC.

With over $8 million in Jackpot prizes, Flip's Star remains the most popular game, exceeding the platform's current market cap of $5.8 million, while Rapid To The Moon has 15 BTC in prize fund despite its relatively infancy.

True Flip has also decreased the price for “Flip’s Star” by 50% ahead of a special ticket price stability mechanism schedule to be unveiled by Q1, 2018. This mechanism will ensure that ticket prices remains stable regardless of rates. Tickets are now priced at 0.0002 BTC per 1 ticket.

“True Flip started as a game with a once-daily jackpot drawing and the average user spent about $5 per day on trueflip.io. Users lacked real-time games that would drive additional ticket buying and raffle participation. We completely redesigned the platform, combining several game products in a user-friendly environment. This is a step forward to the “World of True Flip”, which is in development to gamify the entire system, offering users characters, levels, quests, experience points, bonus games and much more” – said the COO of True Flip, Nikita Parkhomenko.

The gaming interface is not the only beneficiary of the platform's impressive revamp. The “Token Holder Profile” has also been streamlined to present comprehensive data sheet in a visually friendly and well structured layout.

“As the new landing has been launched, now there are no obstacles to impede our marketing progress. The main focus is of course the ticket sales, which will keep growing with the help of our CPA partners, as well as the enhanced player support and stable positive news flow raising awareness among our desired audiences”, - reported CMO Konstantin Katsev.

True Flip has also announced that it will be accepting its TFL tokens for all games. A ticket for “Flip’s Star” can now be bought at 1 TFL, while “Rapid to the moon” goes for 0.5 TFL.

True Flip is a provably fair, blockchain-based lottery platform, leveraging distributed ledger system and smart contracts to create the largest, transparent gaming platform. Blockchain technology will ensure that all transactions on the platform are easily verified and public.

Presently, True Flip is offers players a choice of two games, with three more in development. The platform has attracted 150 000 registered players. Following its successful crowdsale, True Flip has boosted its Jackpot to  400 BTC. This pot is expected to keep growing with every sold ticket.

True Flip also offers a wide range of B2B solutions for igaming operators, affiliates and integrators based on proprietary software at trueflip.io