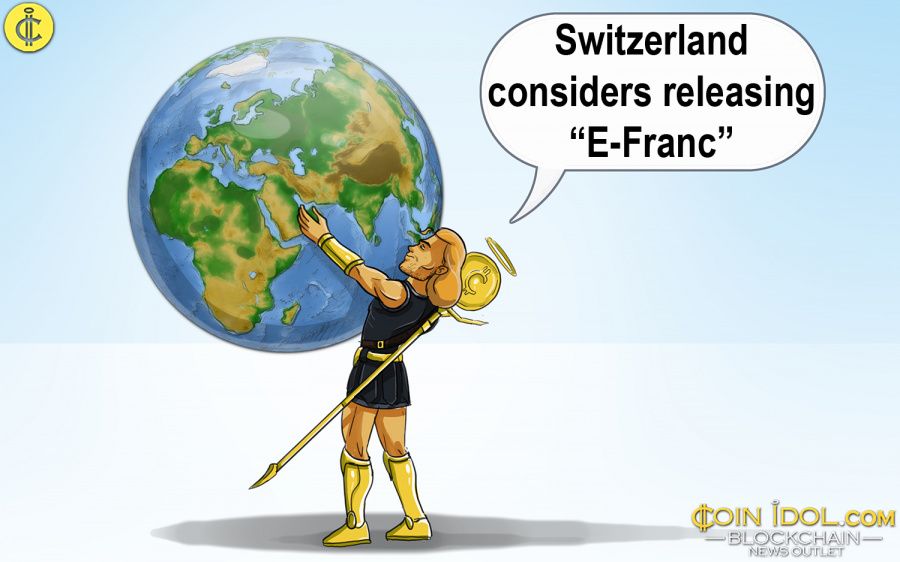 Swiss stock exchange chairman Romeo Lacher has proposed to introduce an innovative national digital currency to the financial market. He explained that the new trading coin, “e-franc”, will help to stimulate the economy of the country, in addition to being a more beneficial payment system compared to traditional systems.

“An e-franc under the control of the central bank would create a lot of synergies – so it would be good for the economy,” Mr Lacher said, stating that he did not like cash.

According to reports, Mr Lacher also admitted that there would be a lot of upsides while developing a state-regulated virtual coin. Besides, the chairman added that the stock exchange would express big support for any projects like that.

Swiss National Bank Does not Approve the Fintech Initiative

The Swiss National Bank reacted to Mr Lacher’s offers negatively, stating that it sees “no need” to invent a national cryptocurrency. The financial institution explained that the current cash-based and cashless payment systems are doing their work well enough.

Even though Romeo Lacher expressed a great enthusiasm towards a government-controlled digital currency, he claimed that the exchange, owned by SIX Group, would not permit any kind of cryptocurrency trading.

“We have actually no plans to admit trading of cryptocurrencies or ICOs. But we see a lot of advantages for blockchain across our businesses.”

Is Switzerland an International Leader in Distributed Ledger Technology?

Mr Lacher expressed an opinion that the Swiss government needed to develop the country as a worldwide leader in distributed ledger technology. But he also recognized the risks of being a pioneer in this field on the cryptocurrency market are really high.

“I think the strategic direction is good, but it’s like going into fog,” - Mr Lacher said. “You don’t know what you will see on the other side. Many mistakes will be made, but we will also learn a lot and I am sure, we will be successful.”

Tags
Cryptocurrency Switzerland Exchange Trading Stock Finance Market Digital currency
Most Popular
May 11, 2021 at 14:27
PR
VulcanVerse’s Marketplace Volume Triples from $5m to $15m, $20M Giveaway to Follow
May 11, 2021 at 14:02
News
Bitcoin and Dogecoin Prices Trending Up Following Hype from Mark Zuckerberg and Elon Musk
May 11, 2021 at 13:00
News
Ripple Consolidates Above $1.35 Support as Sellers Push to the Downside
May 11, 2021 at 12:11
News
Banks Are Getting Increasingly Tough on Bitcoin and Other Cryptocurrencies Amidst Mainstream Adoption
May 11, 2021 at 11:08
News
Litecoin in Minor Retracement, Eyes Next Target at $604 High
More