Boston, MA, November 20, 2018 - Spark Blockchain and Onexpo International will co-host the 2018 ASEAN Digital Assets Summit on December 9, 2018 at the Bangkok Convention Centre @ Central World in Bangkok, Thailand. Strategic partners for this event include Liaoyuan, Neex.com, OATH, Infinitus, QuarkChain and He Cai Jing. There will be more than 1000 attendees, more than 30 executives, more than 50 speakers and more than 100 media partners globally attending this event. 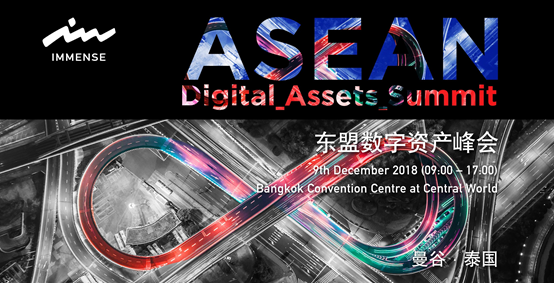 In addition, the summit will select winners from 10 distinguished projects based on an interactive voting system by the community, honoring the Best Innovation Award, the Most Popular Award, and the Most Promising Award.

In recent years, the economic levels of ASEAN countries, which are an important emerging economy in the world, have grown rapidly. The 10 ASEAN countries have a population of about 600 million in total, which consist of different ethnic backgrounds and various constitutional systems. Multiple digital currencies, such as Bitcoin, are also pouring into this emerging market. Blockchain technology, at the same time, is beginning to take hold in this market. It is estimated that in 2019, the Blockchain technology will become mainstream in the ASEAN market.

Among the 10 ASEAN countries, Thailand can be counted as the “Focal Point”, and it has a huge market of nearly 70 million. Thailand started embracing Blockchain technology in 2018. In early July of this year, Thailand passed the Digital Assets Business Act, which legally divides digital currencies into two major categories: one is used as a cryptocurrency when commodity exchange is involved; the other is used as a digital token when participating in an investment or receiving a specific commodity.

There are immense possibilities for the development of the blockchain industry in ASEAN countries, especially in Thailand.

Currently, the government is accelerating the layout of digital infrastructure and technology to achieve the 2021 economic development plan. Thailand has rapidly introduced and improved its policies because of the booming market of digital assets.