South Korea Cracks Down on Cryptocurrencies 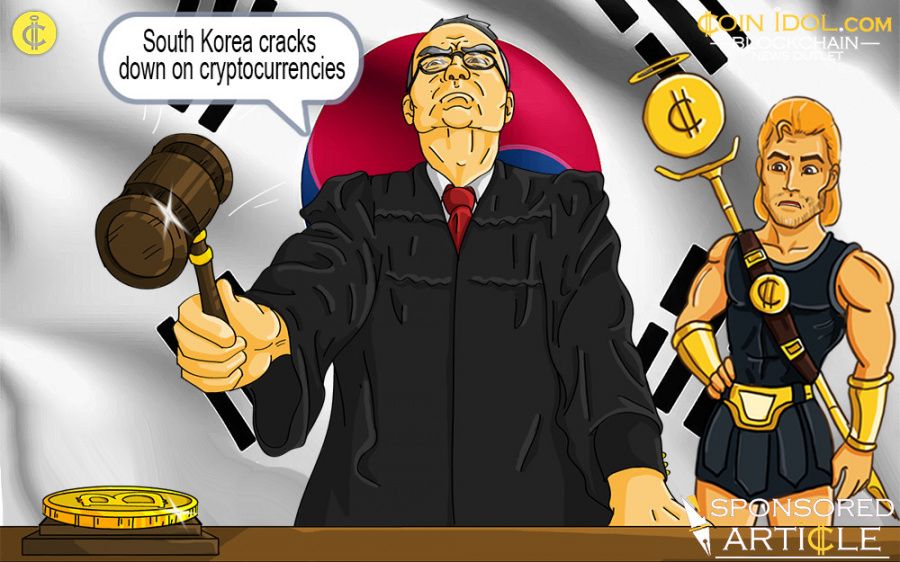 Bitcoin prices tumbled on Thursday, following news that South Korea’s government is considering a ban cryptocurrency trading. While the U.S. appears to have embraced cryptocurrency trading with the introduction of futures by the CME (Chicago Mercantile Exchange) and the CBOE (Chicago Board of Options Exchange), which are regulated by the CFTC and SEC, South Korea’s Justice minister Park Sang-ki said the government was preparing a bill to completely halt trading of bitcoin or other digital currency on domestic exchanges.

Korea appears to be concerned with the excessive euphoria associated with bitcoin trading. There are more than a dozen cryptocurrencies traded in South Korea and regulators are now leery of excessive speculation and the ability to hide your gains. Regulators have started to crack down hard on cryptocurrency shops. An official at Coinone, which is a cryptocurrency wallet told Reuters that the company was raided by the National Tax Service. The official said that Coinone was cooperating with the investigation.

South Korean authorities are also concerned that cryptocurrencies will be used to facilitate crime.  Money laundering can occur is there is no specific individual or company associated with a specific bitcoin.  Reports show that Bithumb, the second largest virtual wallet located in South Korea, was raided by the tax authorities.

Next Steps for South Korean Regulators

The next step for South Korean regulators is to generate a bill that would ban cryptocurrency trading.  This will be difficult to put into place.  China threatened to ban trading during the summer, but nothing ever came of the countries threats.  There is a difference between banning and regulating, which is more likely. A ban would require a majority vote in the National Assembly.  Regulating the industry is a more likely scenario.  Having wallets vetted by authorities, will create transparency, and will provide for a better business model. Coinbase in the United States is regulated along with the future exchanges that provide traders with vehicles to speculate on the direction of cryptocurrencies.

While cryptocurrency markets were on edge following the news that South Korea is considering banning exchanges that trade cryptocurrencies, they are unlikely to be successful. What is more likely is that the government set parameters to regulate the industry providing a safer and more secure cryptocurrency trading environment.

Tags
South Korea Korea Cryptocurrency Trading Bitcoin Government Ban News Exchange Bill
Most Popular
Jul 24, 2021 at 11:45
News
Pumping and Dumping, or Why Traders Shouldn't Go after Tweets from Crypto Billionaires
Jul 24, 2021 at 10:53
News
Uniswap in a Brief Rally, Faces Rejection at $19 High
Jul 24, 2021 at 08:19
News
Polkadot Is in a Sideways Trend below $13.50, Downtrend Likely
Jul 23, 2021 at 12:24
News
Remote Education Rocks: Top Universities, Including MIT, are Nurturing Blockchain Professionals
Jul 23, 2021 at 11:32
News
Ripple Rallies on the Upside but Is Unable to Breach the Resistance at $0.60
More