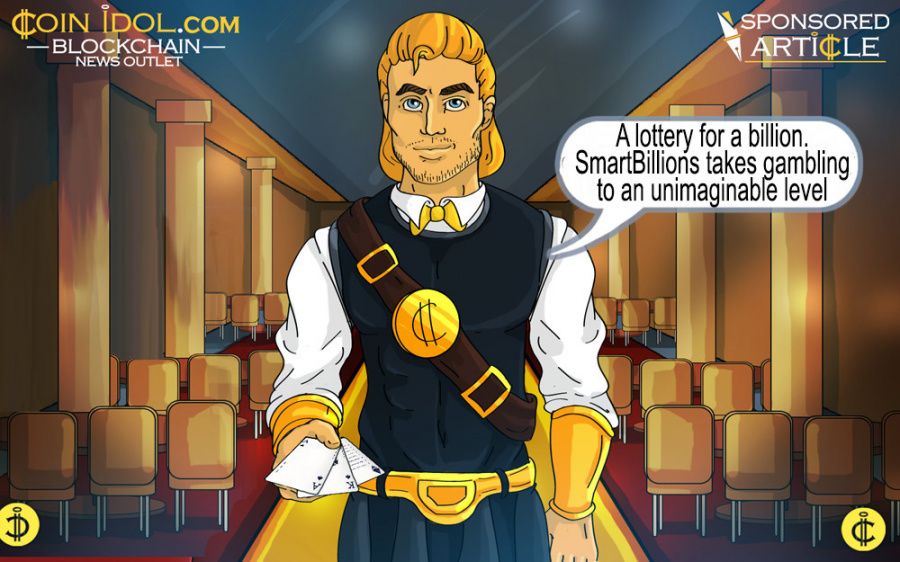 The online lottery industry is currently suffering from a lack of growth. This is due to limited transparency and decentralization as well as hidden fees, convoluted rules, cheating, and a lack of trust. Third party involvement has also been shown to severely influence prize payouts and skew draw results, reducing the public’s trust in traditional lottery systems. The aim of SmartBillions is to provide the public with a fully transparent lottery system and freedom to participate for everyone around the world.

SmartBillions, is the world’s first lottery system that is completely transparent, decentralized, and fully anonymous. The platform is actually a smart contract that runs on the Ethereum Blockchain. It will allow people all over the world to partake in online gambling in a multibillion dollar industry that’s constantly booming.

SmartBillions aims to eliminate the fear of cheating, unfair taxes, and strict regulations. Run on an entirely decentralized platform and not influenced by any organization, company, or party. The lotteries secure system ensures that cheating and unsportsmanlike manipulations are gone.

Play tokens will be allocated immediately, while all funds raised are stored on a smart contract.

SmartBillions also offers investors extra protection and assurance, by allowing them to return unused coins for a partial, 71,43% refund.

PLAY token holders will also dividends on a monthly basis. The dividend amounts are based on a fixed 5% ticket sale revenue for a given period allocated over the number of all PLAY tokens in circulation. Dividends will be automatically allocated to users wallets.

Lottery players will have to create combinations of six number, ranging between 0 and 15. Payouts occur after at least 2 correct matches. With there being a draw every 15-20 seconds. Users can expect nearly instantaneous bet placements and instant payouts in ETH. The chances of winning a jackpot are also higher than in traditional lotteries, with odds
being 1 to 16,7 million. Also, identities do not need to be verified in order to participate in the lottery.

In addition to Smartbillions stakes being the safest in the world, they will also be the highest, with user jackpots reaching $2.5 billion dollars on occasion.

What’s to come for SmartBillions

The SmartBillions lottery will initially be accessible through a website, with a mobile app set to follow in Q1 2018, designed to simplify lottery participation for mobile users. The dev team will continue working on new smart contract type products and on adding more PLAY token functionality and use. Current plans include for the token to become a global online gaming currency that can be used on multiple platforms.

Expect PLAY to be listed on popular exchanges about 14 days after the tokensale ends.

For more info on the project and the PLAY tokensale, check out their website or refer to their whitepaper.


Coinidol's team searched for information about the SmartBillions project on Google and found suspicion from users that it could be unfair.

Coinidol didn't carry out in-depth research on the project to prove or disprove this fact. But we have asked SmartBillion to comment on the main questions of the community.

The Leader of SmartBillions provided the following clarifications regarding the Hackathon event:

“SmartBillions ran the bug bounty in order to tighten the safety features of the smart contract and possible lottery attacks. The bug bounty referred to as hackathon acted as an official audit that is given to the community with according remuneration (bounty) that followed finding the gap. This was all held for the smart contract to get maximum safety during the ICO, to fully protect the investors, since investor safety is our primary concern. With all regards to the issue addressed on Reddit, Since the person that used the gap did not withdraw all the bounty prize by his own mistake, the admin protected the remaining funds in order to not remunerate the users that followed the initial bug finder. Since we believe the bounty should be reserved for the first person that finds the bug. Since the person remained anonymous and was able to withdraw 400 ETH, the remaining funds had to be protected from withdrawing using the same gap by numerous other people. All the remaining funds plus the missing balance were added to the second phase of the bug bounty that launched on 5th October, this time the rule was clearly emphasized to avoid the potential misunderstandings: The bug hunter is able to withdraw all the funds he is able to when he finds a gap, but if for some reason he is not able to withdraw all the funds, the admin reserve the rights to protect the remaining funds from the followers of the initial bug finder. We stand behind transparency, this is the reason we decided not to hire an audit company in favor of a community-driven audit, we want every aspect of the project, as the lottery itself, to be public. In the upcoming days will publish all the bugs that we were able to track and fix with the help of the community that will be credited.

We have published all news here: https://medium.com/@SmartBillions.

We have described why and how we withdrew the funds on the Medium: https://medium.com/@SmartBillions/smartbillions-hackathon-smart-contract-hacked-with-120-000-b62a66b34268 "

"It’s absurd to think that the project is a scam, considering that it is a publicly open smart-contract and the code can be accessed and viewed by anybody who is interested after it becomes officially published. It can’t be altered or manipulated, even by the developers.

The client wants to remain anonymous, and he has a right to that. It’s improper to consider the project to be a scam simply because the developers prefer to stay anonymous.” Added Anastasia Kuteynikova, PR-manager of Russian marketing company www.icoproducer.com, that represents SmartBillions.

“It’s obvious that the crypto community consists of anonymous libertarian persons, led by the anonymous Satoshi Nakamoto. But part of the community are scammers, that use this image to hide the real nature of their crime. That’s why we do our best to check out every client before publication, even if it’s an already paid sponsored publication like this one. We force every client to explain the suspicions of our readers, if they have any, so that readers can analyse all the information around the company when they take a decision to invest or not”.

Tags
Gambling Lottery Trust Online Transparency Industry Fee Decentralization
Most Popular
May 03, 2021 at 15:03
News
China Eyes February 2022 Beijing Olympics for Digital Yuan Launch but Is It Still Viable Amidst COVD-19 and Rising anti-China Movements?
May 03, 2021 at 14:17
News
Ethereum Rallies Above $3,000, Breaches More Resistance Levels
May 03, 2021 at 13:00
PR
Everything You Want to Know about Stellar, and Why it’s Getting Added to 1xBit
May 03, 2021 at 12:17
News
Bitcoin Reclaims $58,000 Support as Bulls and Bears Resume Price Tussle
May 02, 2021 at 11:54
News
South Korea Announces Testing of CBDC Right After Imposing a New Tax Framework; Is It a Coincidence?
More