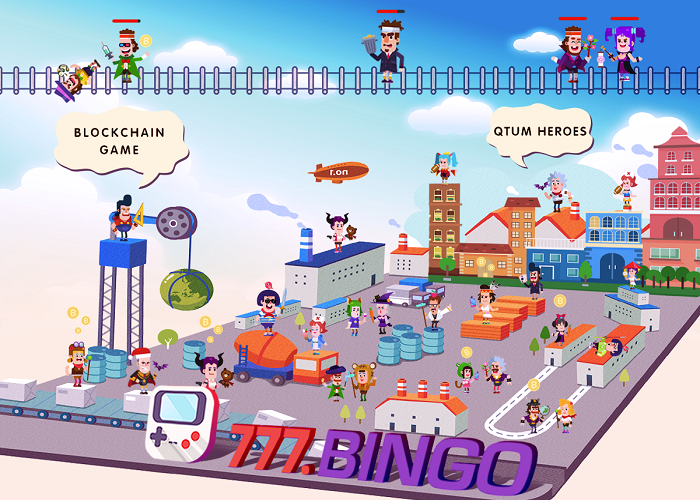 The BINGO.FUN (777.BINGO) pan-entertainment platform’s first venture into crypto-gaming has flocks of gamers begging to be let in on the fun.  QTUM  Heroes has entered beta, and a few lucky pioneers received invitation codes to test it after the announced registration process. Now, fans of similar cryptogames, like EtherBots and CryptoKitties, are scouring the web in search of access codes.

The game is available to players from East and West, playable in four languages: English, simplified Chinese, Korean, and Japanese. All that is needed to register or login is a valid mobile number with a corresponding country code.  Players can also participate in the QTUM Heroes global community on  Telegram, WeChat, and Kakao.

Every Hero character on QTUM Heroes is composed of eight specific genes. These affect variables from gender to whether they have a cute or cool face. Some genes are rarer than others and will add value to your Hero character. Rare genes are more likely to belong to Generation 0 Heroes.

Baby Heroes can be bred from owned Heroes for the price of 1.00 QTUM and they will grow into a full blown Hero five minutes later. Mating is also possible between two owned Heroes, or by visiting the Love Center to mate a Hero with another. Heroes are originally purchased at the Marketplace to the suit of each player’s budget.

There are two kinds of player-versus-player modes in QTUM Heroes. 1V1 mode: Players can find an adversary online and challenge them to a one on one battle to prove who owns the strongest Hero. Every account has access to 10 daily matches for free. 8V8 mode: Players choose their strongest Hero and join an eight-player battle arena for the price of 0.1 QTUM. Each match lasts 10 minutes and the top three winners receive 0.3 QTUM, 0.2 QTUM, and 0.1 QTUM, respectively, leaving third-place at a break-even point. The remaining players will receive a small 0.04 QTUM return.

At the arena, players can also tip waiters to carve trophies on their Hero’s profile. These trophies add to their value in the Marketplace and Love Center.

Some of the first players to join the beta for the game are already reporting massive increases in the value of their Heroes. Being the first to test the game, pioneers have immediate access to Generation 0 Hero characters which will become increasingly rare as the game becomes more populated. These characters have the most chances of breeding strong Baby Heroes and they are only released by the official QTUM Heroes store. The rare genes passed on by G0’s can also reflect on their offspring’s future value.  Generation 0 Heroes started at a price of 1.00 QTUM and are now trading for up to 20.00 QTUM, with an all-time high of 50.00 QTUM.

“We are thrilled to have launched QTUM Heroes on our platform, think of it as the App store for blockchain. We are going to bring many more games and other types on entertainment to provide an absolutely new experience for our users. This is just the beginning.”

Different from other blockchain games,  QTUM Heroes is not just about collectibles. The game is focused on enabling dynamic interactions between players.

About BINGO and QTUM Heroes

QTUM Heroes is developed by leading game studio Mob Arts in collaboration with the QTUM blockchain. Mob Arts’ previous game, House of Heroes, is considered one of the most successful mobile games to be released in Asian markets. It was noticed by Chinese internet giant Tencent and immediately launched on all their platforms, despite being developed by a third party.  The team at BINGO believes that it can bring the same success to a growing industry. QTUM Heroes is the next step in crypto-gaming; improving on the past by integrating a world-class arena battle into the blockchain.

777.BINGO is the source of this content. This press release is for informational purposes only and should not be viewed as an endorsement by CoinIdol. We take no responsibility and give no guarantees, warranties or representations, implied or otherwise, for the content or accuracy. Readers should do their own research before investing funds in any company.